Accessibility links
SEALs' Chopper Was On A Rescue Mission, NATO Says : The Two-Way The NATO mission in Afghanistan has released a statement detailing the crash of Chinook helicopter that killed 30 U.S. service members Saturday. The helicopter with 22 Navy SEALS aboard was on a mission to aid another U.S. force under fire.

SEALs' Chopper Was On A Rescue Mission, NATO Says

SEALs' Chopper Was On A Rescue Mission, NATO Says 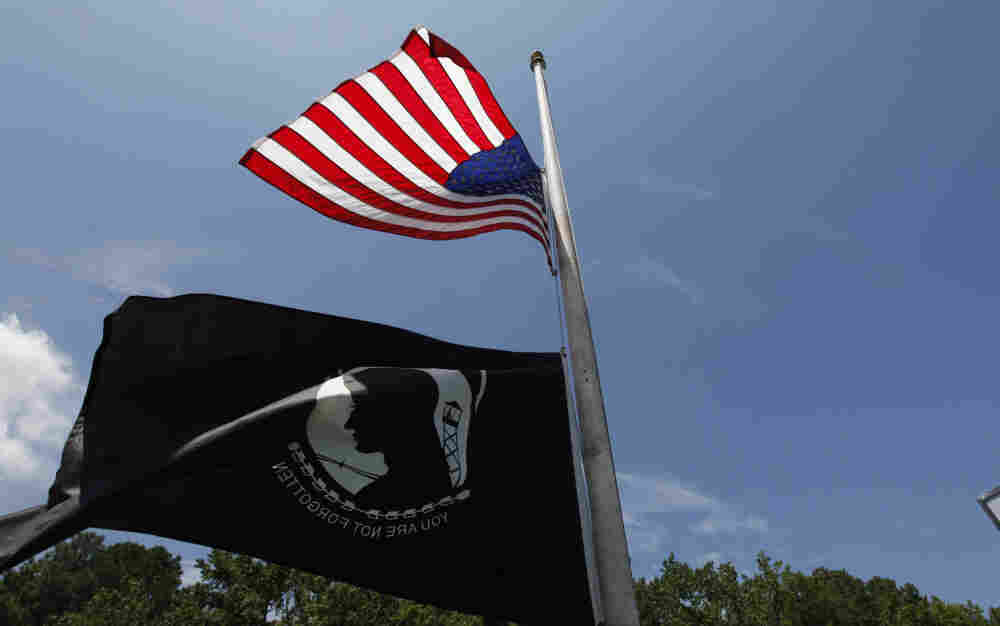 A U.S. flag and a POW/MIA flag fly at half-staff at a sports bar near the main gate of Naval Air Station Oceana/Dam Neck Annex, the base of Navy SEAL Team Six in Virginia Beach, Va., Monday. Steve Helber/AP hide caption

New details are emerging about the downing of a Chinook military helicopter in Afghanistan early Saturday that killed 30 U.S. service members and 8 Afghans. Of the American casualties, 22 were Navy SEALS. The NATO mission in Afghanistan released a statement about the crash Monday.

The statement says a combined force of U.S. and Afghan commandos was sent on Saturday to search for a Taliban leader in Tangi Valley, about 60 miles southeast of Kabul. According to the statement, the team came under fire from several insurgents armed with AK-47 rifles and rocket-propelled grenades.

The troops on the ground requested additional forces, according to the statement. A CH-47 Chinook helicopter was dispatched, carrying forces from the U.S. special operations command. But it was hit by a rocket propelled grenade upon arrival. Forces already on the ground and also a team from a nearby forward operating base moved to the crash site to secure it and search for survivors.

Members of the elite SEAL force who died Saturday were reportedly not directly involved in the killing of Osama bin Laden three months ago. But as a feature report by TV station WAVY of Virginia Beach, Va., shows, they were passionate about their work, and their country.

Many of the SEAL team members were based in Virginia Beach. This morning, NPR's Daniel Zwerdling reported on the local community's reaction to the SEALs' deaths. You can hear the audio here.

On CBS, a SEAL veteran talked about the loss:

Former SEAL Howard Wasdin, author of "SEAL Team Six: Memoirs of an Elite Navy SEAL Sniper," called the loss of life a "staggering blow" to the elite team, though he would not specify numbers "because it gives out capability."

On "The Early Show," he called it a "terrible loss," adding, "You never quit training. You train as a SEAL and then, once you get to this team, you continue training just like every other team. It's a never-ending process and a commitment most people can't even comprehend."