Accessibility links
U.K. Riots Continue; Bookstores Soldier On : The Two-Way With 16,000 police officers out in full force on London's streets in an effort to put a stop to violent riots that have ravaged the city for three days, the British capital was "relatively calm" Tuesday, says the BBC. 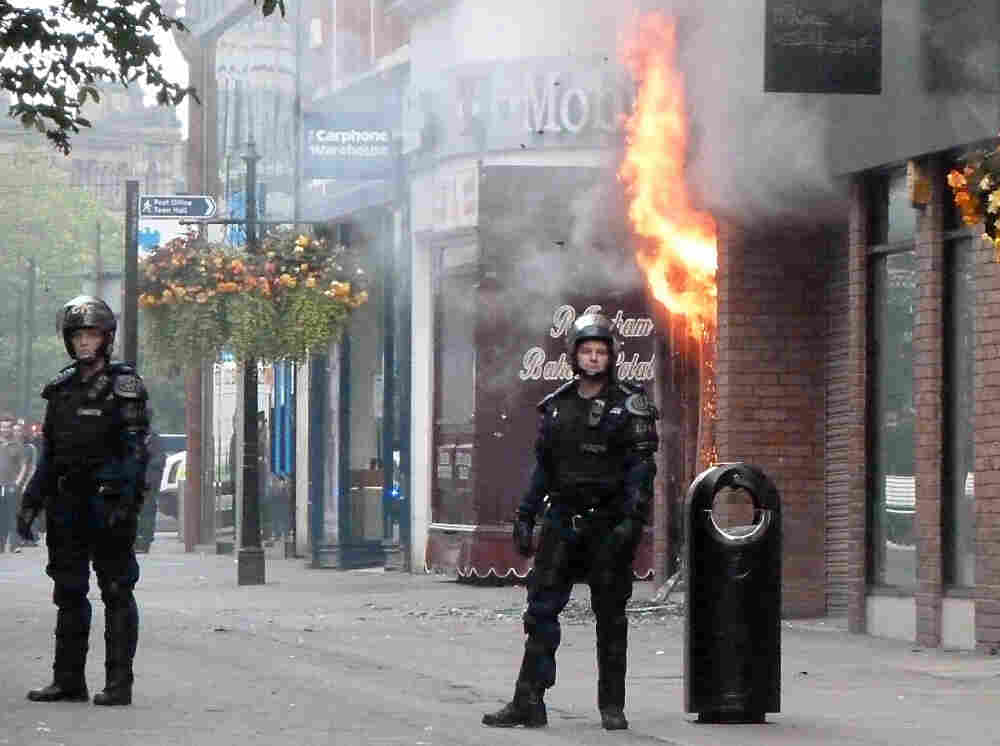 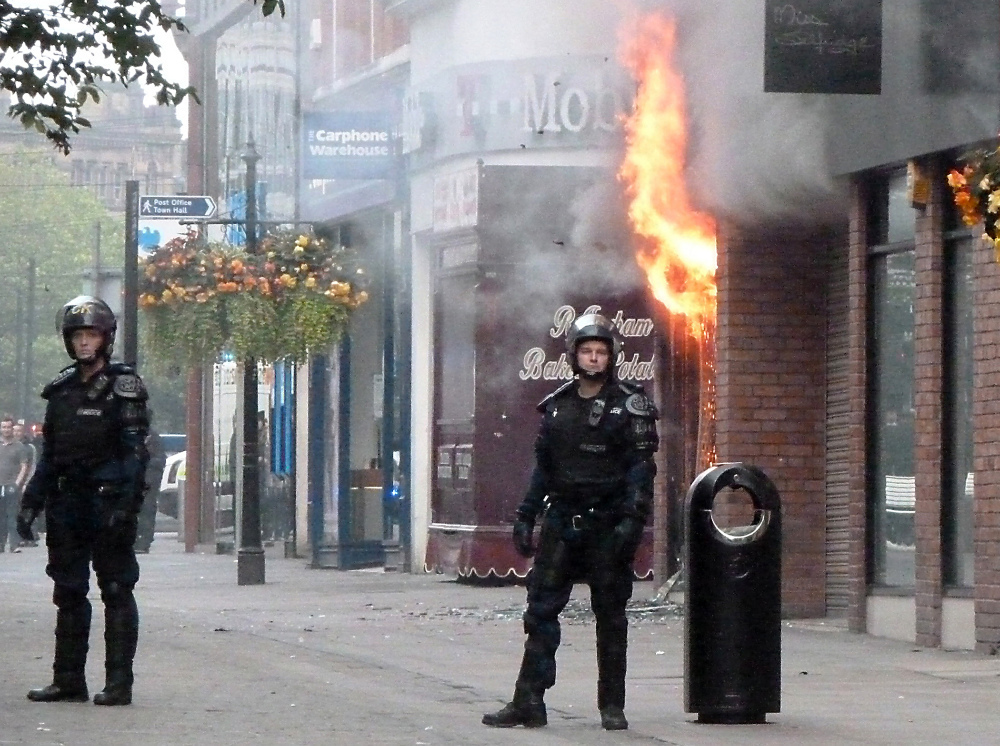 Fire rips through a retail store in Manchester, in northwest England, Tuesday, marking a fourth night of violence in Britain. Looters have targeted electronics and clothing stores.

With 16,000 police officers out in full force in London's streets in an effort to put a stop to violent riots that have ravaged the city for three days, the British capital was "relatively calm" Tuesday, says the BBC.

But despite the quieter scene in London, fires, riots, and looting erupted in Manchester and other cities. And on Amazon's British website, sales of baseball bats have apparently risen by 3,263 percent in the past day. Andrew Sullivan's The Dish first reported the sales spike.

Many buses and train services between potential trouble spots have been discontinued, an attempt to make it more difficult for rioters to meet in large groups.

The BBC has established a feature page with text messages from its reporters, key developments, and a live video feed of its coverage.

Britain's venerable bookstores have been weathering the riots, often staying open even as gangs gathered nearby. And they've done so with panache.

The small bookseller Pages of Hackney stayed open — and even provided a running commentary on its Twitter account.

As the Jacket Copy blog notes:

On Monday the store tweeted, "10 mounted policemen have joined the riot police outside the shop, which we did close in the end, shortly before Harris on the corner looted."

On Tuesday, the store was open for business again and keeping British traditions alive: "We're open, we're ok, morale is low," the store wrote, "but we're drinking a lot of tea."

Large chain stores Waterstone's and WH Smith have been consulting with police and closing shops deemed to be at risk. But most have simply shortened their hours, and booksellers reported little damage Tuesday. Most of the rioters seemed to be targeting electronics and clothing stores, according to reports.

One tweet became particularly popular after last night's looting. Posted by Eleanor Orebi Gann, it read: "Waterstone's staff member to me last night: 'We'll probably stay open. If they steal some books, they might actually learn something."

Writing for Global Post (and published here at NPR), Michael Goldfarb gives a striking first-person account of the riots, and how they've affected daily life for him and his wife.

Noting the news channels' helicopter coverage of the riots and looting — and the announcement of new targets by cellphone — Goldfarb says, "It isn't hard to imagine that young people from the same social background around the city watching those pictures and getting texts from people they know in Hackney decided it was worth the risk of arrest to go out to the local shopping area and take what they wanted."

He also gives a glimpse of what he sees as the average British rioter:

The rioters were overwhelmingly teenagers and kids in their 20s. About 20 percent of 16-24 year olds in Britain are unemployed. That figure is much, much higher on council estates — the British term for housing projects. (You can leave school at the age of 16 in this country). Unemployment statistics in Britain are sadly vague, but a reasonable estimate of youth unemployment just in Hackney is 33 percent.