Accessibility links
Fugitive 'Dougherty Gang' Caught In Colorado : The Two-Way The "Dougherty Gang" — two brothers and their sister, wanted for bank robbery — has been captured in Colorado,The Denver Post reports. Ryan, Dylan and Lee Grace Dougherty were reportedly arrested one day after visiting an REI store, where a tipster phoned police. 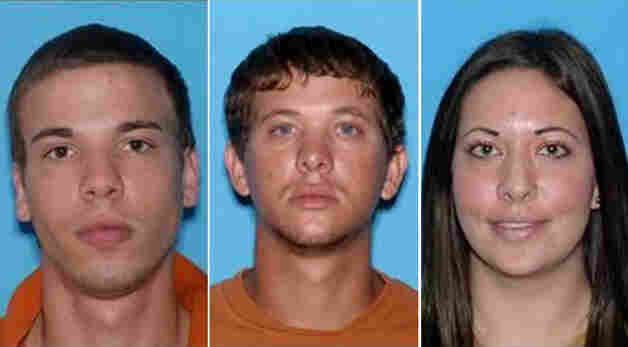 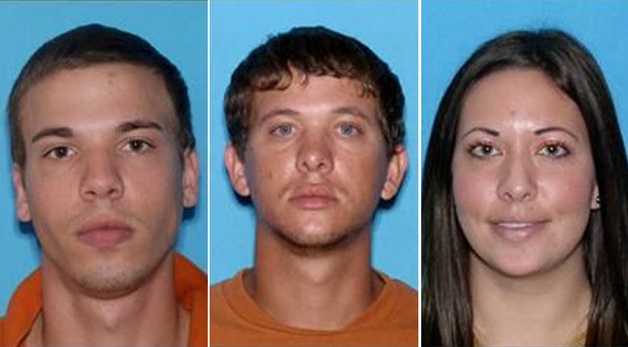 The "Dougherty Gang" — two brothers and their sister who are accused of a crime spree that began in their native Florida — has been captured in Colorado, The Denver Post reports. Ryan Dougherty, 21, Dylan Dougherty Stanley, 26, and Lee Grace Dougherty, 29, were reportedly arrested one day after visiting an REI store in Colorado Springs, where a tipster phoned police.

The trio is accused of shooting at a police officer in central Florida who tried to pull over their 2006 white Subaru Impreza for speeding, on Aug. 2. Instead, the car led him on a high-speed chase. After leading the officer's car around a parking lot corner, shots were fired at the police vehicle, flattening one tire. Police have released video of that incident:

Police say that after driving to Georgia, the Dougherty siblings robbed a bank. Here's how the Post describes it:

Five hours later, they allegedly robbed a bank in Valdosta, Ga. One of them fired an AK-47 rifle into the ceiling as they entered the front door. Another of the trio also was armed with some type of machine gun, while the third collected the cash.

Police say that the car the Dougherty siblings were arrested in was displaying Texas license plates that had been reported stolen.

According to the state patrol, there was a high-speed chase from Pueblo County to Huerfano County early Wednesday. The chase ended in a crash about 9:30 a.m. outside of Walsenberg. At 9:47 a.m. two of the siblings – the woman and one of her brothers — were taken into custody and the third brother ran from the crash toward Interstate 25. He was arrested just before 10 a.m.

Ryan Dougherty has a police record listing 14 felony arrests. On Aug. 1, he was sentenced to 10 years of probation for sending inappropriate text messages to an 11-year-old girl in Michigan, whom he met online.