Accessibility links
Somalia: Stolen Food Aid, And All To Blame : The Two-Way One report found that up to half of the food aid is being stolen, while another report found that even groups intending to do good have deepened the crisis in the country.

Somalia: Stolen Food Aid, And All To Blame

Somalia: Stolen Food Aid, And All To Blame 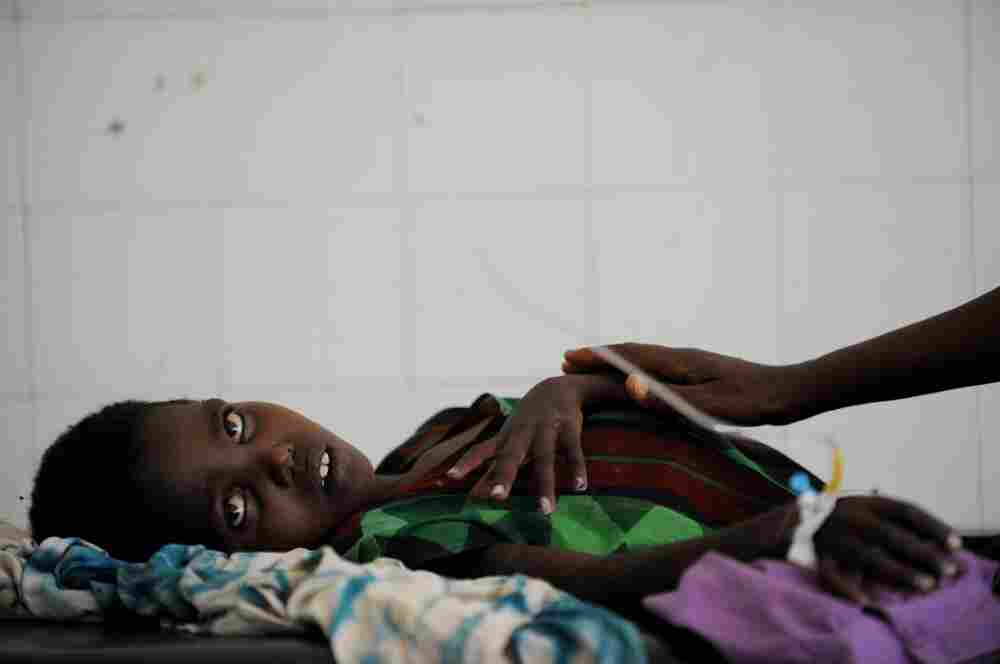 Bisharo Hurow, 10, lays on a cot at a hospital in Mogadishu while suffering from severe diarreah and vomiting on August 15. A cholera epidemic is spreading in famine-stricken Somalia. Roberto Schmidt/AFP/Getty Images hide caption

Two heart-wrenching stories are making headlines from Somalia, today: First, an Associated Press investigation found that thousands of sacks of food aid meant for victims of famine have been stolen.

The AP reports that the same food is then being sold in markets where children don't have enough to eat:

The U.N.'s World Food Program for the first time acknowledged it has been investigating food theft in Somalia for two months. The WFP said that the "scale and intensity" of the famine crisis does not allow for a suspension of assistance, saying that doing so would lead to "many unnecessary deaths."

And the aid is not even safe once it has been distributed to families huddled in the makeshift camps popping up around the capital. Families at the large, government-run Badbado camp, where several aid groups have been distributing food, said they were often forced to hand back aid after journalists had taken photos of them with it.

Ali Said Nur said he received two sacks of maize twice, but each time was forced to give one to the camp leader.

"You don't have a choice. You have to simply give without an argument to be able to stay here," he said.

One source told the AP that that as much as half the food aid is being stolen by "unscrupulous businessmen."

NPR's Frank Langfitt worked on a series earlier this year that explained much of the troubles of Somalia. But how deep they go is evident in a new report put out today by Human Rights Watch. The conclusion of the 58-page report is that everyone is to blame for the country's crisis.

While for the most part, the knee jerk reaction has been to throw a lot of the blame on al-Shabaab, a ruthless group of Islamist insurgents, the report found that in their offense against the group, the Somali Transitional Federal Government (TFG), the African Union peacekeeping forces (AMISOM), and Kenya- and Ethiopia-backed Somali militias have deepened the crisis.

The report, based on interviews with recently arrived Somali refugees in Kenya and other sources, examines two major TFG offensives against al-Shabaab since September 2010. Civilians have borne the brunt of the fighting, Human Rights Watch said.

All sides have used artillery in the capital, Mogadishu, in an unlawful manner that has caused civilian casualties. Al-Shabaab has fired mortars indiscriminately from densely populated areas, and the TFG and AMISOM forces have often responded in kind with indiscriminate counterattacks. As a result, civilians have not known where to turn for protection. While al-Shabaab's reported withdrawal from Mogadishu may bring some respite to civilians in the capital from the incessant fighting, future abuses are likely unless the warring parties take assertive measures to end them, Human Rights Watch said.

"Both sides don't spare the public," a woman who had fled Mogadishu told Human Rights Watch. "Sometimes it happens that the person you had breakfast with in the morning is killed by mortars in the afternoon.