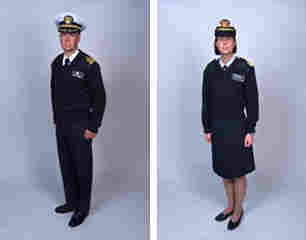 I am not making this up.

With temperatures barely out of the 100s and even higher in many areas, the Commissioned Corps of The U.S. Public Health Service has some helpful tips for officers who stray outdoors from the lab or the clinic.

Update at 1:50 p.m. ET, Aug 16: In an e-mail, Lt. Cmdr. Kyle Lyons has clarified the U.S. Public Health Service's uniform requirements. The bulletin referred to in this post was meant to remind Commissioned Corps officers that they shouldn't be seen in public wearing shirt sleeves, Lyons says. It wasn't, he says, meant to be a directive to always don a sweater or windbreaker in 100-degree heat. Our original post continues:

"Being that it is summer and heat indices have been over 100 degrees here in the National Capitol Region," the Corps' latest newsletter says, "be reminded you have to wear either the sweater or windbreaker jacket when outdoors."

A sweater? A windbreaker? In this heat? C'mon!

But lest you think the Corps is some mindlessly rigid military outfit of doctors, researchers and other health professionals, there is a dispensation for those sweltering indoors.

"An officer may elect to remove the Service Dress Blue Jacket in their immediate office space or vicinity. Vicinity is usually defined as same floor or area that the office is in."

But don't go too far:

"This does not include going upstairs to visit another office, going to another building, or going downstairs to the galley."

For those of you who haven't seen the Commissioned Corps' uniform, it is one of the sharpest in the military. I live down the street from a prominent Corps member and whenever he wears his Dress Blues, he turns heads.

"If you have to think about it," the guide advises, "you probably shouldn't do it."

There's more on the history of the Corps here.