Accessibility links
Libyan Rebels Have Slowly Encircled Tripoli : The Two-Way The rebels are closer to Tripoli than they've ever been during the six-month civil war. That development is paired with news that Gadhafi forces launched their first scud missile since the fighting started. 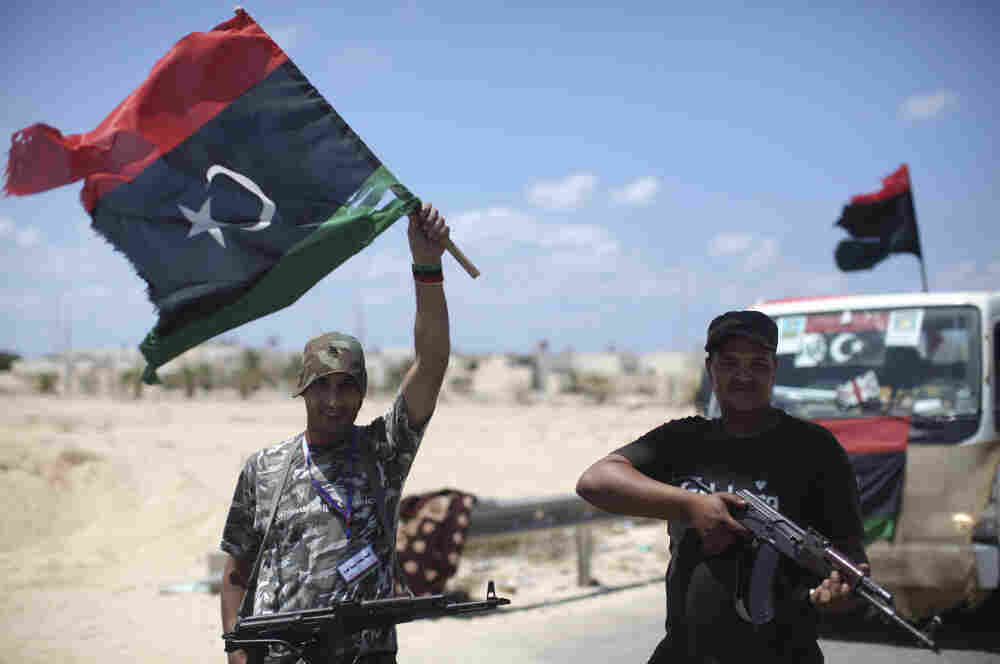 Rebel soldiers pose for photos near the entrance of the town of Brega, Libya. Alexandre Meneghini/AP hide caption

The Libyan opposition is the closest it's ever been to Tripoli since the civil war began six months ago. According to multiple news outlets, the rebels have slowly worked their way around the city and are now in a position to cut off supplies to Muammar Gaddafi's regime.

That news was paired with the apparent defection of Nassr al-Mabroul Abdullah, Libya's head of public security as well as news that Gaddafi's army fired its first scud missile.

In an apparent high-level defection, the head of Libyan public security and a former interior minister flew to Egypt on a private plane with nine family members. Nassr al-Mabroul Abdullah entered on a tourist visa. If confirmed, it would be the latest in a string of defections by prominent officials in Khadafy's regime.

A US military official said government forces fired a Scud missile for the first time in the fighting with rebels, but it landed in the desert about 50 miles east of Brega and hurt no one. The launch was detected by US forces shortly after midnight. Rebel and regime forces have battled over Brega, a strategic port city, and control has gone back and forth between the two sides.

So what does all of this mean? White House Spokesman Jay Carney said the rebel advance means Gadhafi's regime may be coming to an end.

"I think it's becoming increasingly clear that Gadhafi's days are numbered, that he's — his isolation is — grows more extreme as each day passes, and as we have for a long time, we believe that the people of that country, of Libya, need — deserve the right to choose their own future," Carney said aboard Air Force One.

Others however are taking a more complicated view. Con Coughlin, The Telegraph's executive foreign editor, writes today that the launching of a scud missile raises the concern that Gadhafi is "preparing to use chemical weapons in a last-ditch effort to save his regime."

And in a long analysis piece from Reuters, experts lay out three possibilities: 1) The rebels put a strangle-hold on Gadhafi's supplies; his military gives up to save themselves and Gadhafi loses. 2) Gadhafi strikes a deal with a foreign government and seeks exile in a country that won't turn him over to the International Criminal Court. 3) Cutting off Gadhafi's supplies fails to dislodge him, so the rebels make a move for Tripoli and a bloody urban war entails.

Reuters reports that experts are in agreement that a run on Tripoli would almost certainly result in "huge loss of life."