Accessibility links
White House Overstates Rural Role In Military : The Two-Way The White House has been saying that 44 percent of military recruits come from rural America. White it's true that rural Americans have disproportionately sacrificed during war, experts say the White House estimate is grossly overstated. 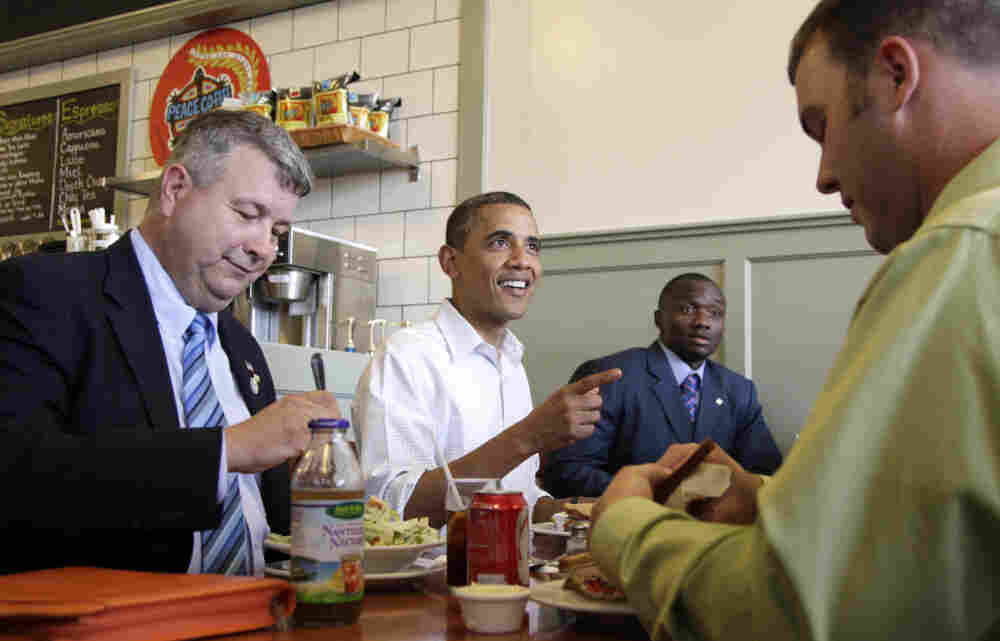 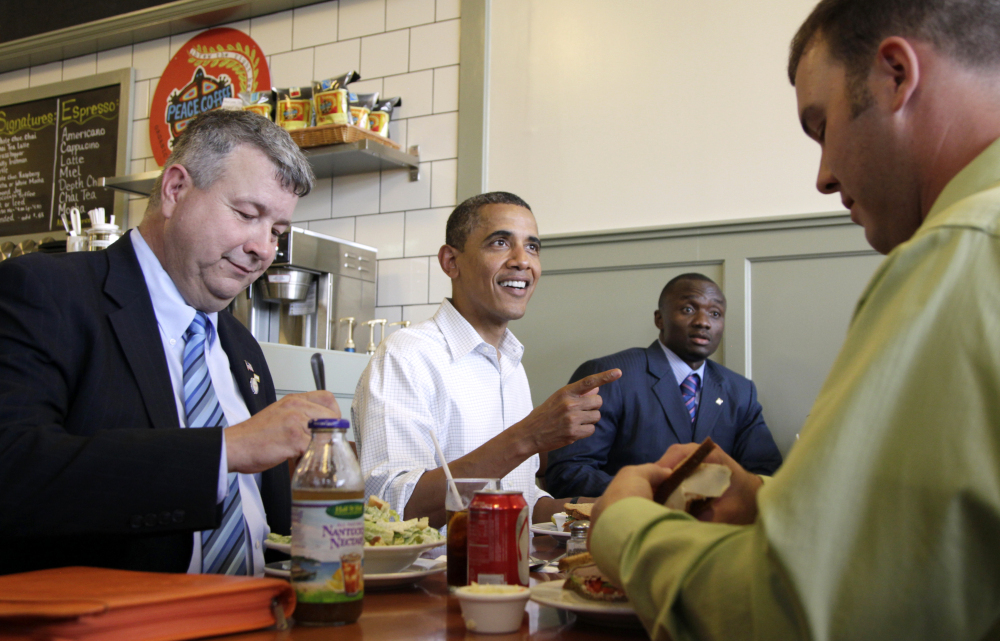 President Barack Obama talks as he has lunch at The Old Market Deli in Cannon Falls, Minn., during his three-day economic bus tour.

There they sat with the president of the United States at the Old Market Deli in Cannon Falls, Minn., five veterans of our two most recent wars. With a turkey sandwich on his plate, Obama acknowledged their service, and the disproportionate sacrifice small towns and rural counties have made in Iraq and Afghanistan, and the military in general.

"Although rural residents account for 17 percent of the U.S. population," the White House said in a statement about the veterans' lunch, "they make up 44 percent of the men and women who serve in uniform."

White House news releases and reports have quoted these numbers for days. Agriculture Secretary Tom Vilsack referred to them as "a little known fact" in a conference call with reporters Friday.

"It is little known, perhaps, because there appears to be no way it could possibly be true," writes Bill Bishop, who first reported the disproportionate military service by rural men and women as a reporter for the Austin American Statesman in 2003.

Bishop has continued to write about rural service in the military on a rural news website called The Daily Yonder. "We've known for at least seven years that rural residents are overrepresented in the military," he says. "But why does the White House issue a report and statements that vastly overstate this phenomenon?"

Bishop's analysis of recruiting records for the U.S. Army, the nation's biggest armed force, puts the number of rural recruits at about 20 percent. That's less than half the number reported by the White House.

Sharp readers will note that the White House refers to "men and women who serve in uniform" and Bishop refers to Army recruits.

But it turns out that the White House numbers also actually refer to recruits. The 44 percent figure, says spokesman Matt Lehrich, came from a 2005 story in The Washington Post.

But the only source for the numbers quoted in the story is an analysis of Pentagon data provided by the National Priorities Project (NPP), a group in Massachusetts that tracks the costs of war and the federal budget.

The NPP report referred to in the story is no longer available on the group's website and Senior Research Analyst Chris Hellman tells NPR he has been unable to locate the data used in the report. But he says that the "44 percent" figure is inconsistent with the annual data his group has been reporting since 2006, which is consistent with Bishop's 20 percent.

White House spokesman Lehrich did not respond to a direct question about why the White House would pull this statistic from a newspaper story, and use it repeatedly, without checking with the president's own excellent sources — say, the Defense Department.

But Lehrich does suggest the overstated number is inconsequential.

"Regardless of how you do the math," Lehrich says, "the point we were making is clear and important: rural Americans are serving at a disproportionate rate and are an integral part of our military."

Bishop agrees, noting "Rural communities are providing far more of their young to military service than the cities." And that disproportionate rate of service and death resonated with some rural voters in past elections.

So, as Bishop asks, "Why gild the lily with figures that are so far beyond reasonable as to be ludicrous?"