Accessibility links
Ambassador Locke Picks Up His Own Coffee, Gains 'Hero' Status Among Chinese : The Two-Way A columnist for China Daily says by buying his own coffee Ambassador Gary Locke has become a model for what Chinese public servants should be like. 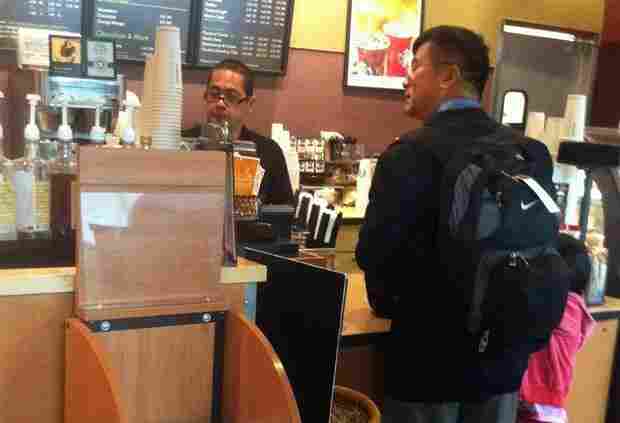 U.S. ambassador to China Gary Locke carries his own backpack and orders his own coffee on Friday Aug. 12 at Seattle-Tacoma International Airport. ZhaoHui Tang/AP hide caption 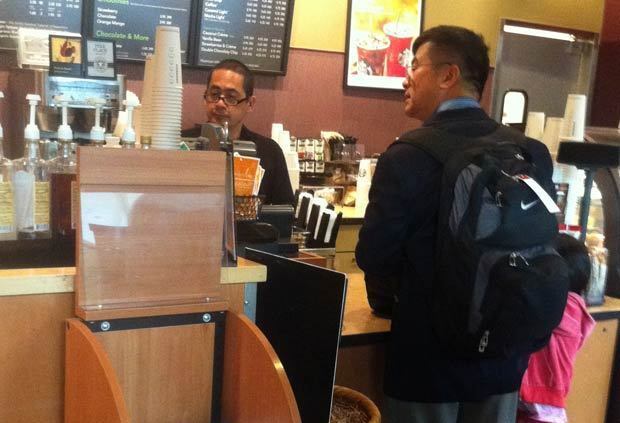 U.S. ambassador to China Gary Locke carries his own backpack and orders his own coffee on Friday Aug. 12 at Seattle-Tacoma International Airport.

Some pictures of the brand new U.S. ambassador to China are causing quite a stir. There's no scandal, instead the pictures have the Chinese reconsidering how their own public servants should act.

And it's all because of a coffee break.

We'll explain: Someone took a picture of Ambassador Gary Locke buying his own coffee at Starbucks in the Seattle-Tacoma International Airport. And, then, later pictures showed Locke and his family arriving at a Chinese airport carrying their own bags.

Many Chinese were incredulous.

"I think people look at him like a hero this time," Chen Weihua told All Things Considered's Melissa Block. Weihua is a columnist for China Daily, the country's national English-language newspaper, and he joked that to many Chinese Locke looked like a "migrant worker."

They were astonished. Weihua explained why in a recent column. He wrote:

To many Americans, there was probably nothing unusual about this. But to most Chinese people, the scene was so unusual it almost defied belief.

How could someone who holds the rank of an ambassador to a big country not have someone to carry his luggage, and not use a chauffeured limousine. In China even a township chief, which is not really that high up in the hierarchy, will have a chauffeur and a secretary to carry his bag.

Watching this episode, many Chinese people might start to wonder if the people at the US embassy in Beijing in charge of arranging Locke's reception would keep their jobs.

But as silly as it may sound, the episode touched a nerve said Weihua and has led to some introspection.

"This is really the new image of what public servants should be," said Weihua. "Right now in China there is a big debate about the spending of government officials. The public called for more transparency of the spending by government."

And that a top ambassador from the United States buys his own coffee and carries his own bags puts pressure on Chinese officials to be more transparent or in the least to be more humble.

More of Melissa's conversation with Weihua will air on today's All Things Considered. Tune in to your local NPR member station or we'll post the as-aired version of the interview here later on tonight.