Accessibility links
VIDEO: Christine O'Donnell Walks Out On CNN's Piers Morgan : The Two-Way She thought he was being rude by asking about issues she writes about in her new book. He said he was being "charming and respectful." 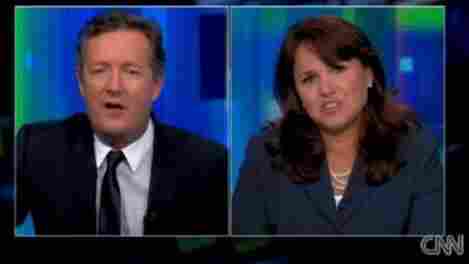 It's been a while since we checked in on Christine O'Donnell, the Tea Party/Republican candidate for Senate last year in Delaware.

Last night, she landed back in the news because of an on-air dust-up with CNN's Piers Morgan that ended when O'Donnell removed her microphone and walked off the show mid-broadcast.

CNN has posted video of the departure moment here and made it available for others to embed, so we'll add it below.

As The Christian Science Monitor says:

"The trouble started when Morgan asked O'Donnell about a part of her [new] book that discussed gay marriage."

Morgan kept pressing on the issue. O'Donnell said she didn't want to go there, in part because "I'm not talking about policies. I'm not running for office. Ask Michele Bachmann what she thinks. Ask the candidates who are running for office."

At one point, O'Donnell said Morgan was "borderline being a little bit rude." He thought he was being "rather charming and respectful" and was asking "questions based on your own public statements and now what you've written in your own book." She didn't buy that.

"I only agreed to go on the Piers Morgan Show because he promised not to hack my cell phone."

Ouch. That's a reference to Morgan's past jobs as editor of News of the World and Daily Mirror, two of the British tabloids at the center of the so-called hacking scandal. He has said that in his time at those newspapers "I ... never hacked a phone, told anybody to hack a phone or published any story based on the hacking of a phone."

"Piers, thanks for the invite. Schedule is already packed, maybe another night. No hard feelings, you cheeky bugger."

Morgan tweeted earlier Wednesday (the conversation was pre-recorded) that it was "my first ever walk-out in 25 years of interviews. I guess viewers can decide if I was 'rude' or not." He also wondered if she might "put a witch's curse on me." That's a reference to her famous "I'm not a witch" ad, which in her book she says she regrets having done.

O'Donnell's book, by the way, is called Trouble Maker: Let's Do What It takes To Make America Great Again.

Update at 1 p.m. ET: Over at Monkey See, our colleague Linda Holmes uses the O'Donnell-Morgan dust-up to examine "the fine art of walking out."