Accessibility links
Libya: Why Has The Tide Turned? : The Two-Way After six months of fighting, opposition fighters are now in Tripoli and Gadhafi's regime may soon fall. It took time for anti-Gadhafi forces to organize and for NATO air attacks to weaken the Libyan army's defenses.

Libya: Why Has The Tide Turned?

Libya: Why Has The Tide Turned? 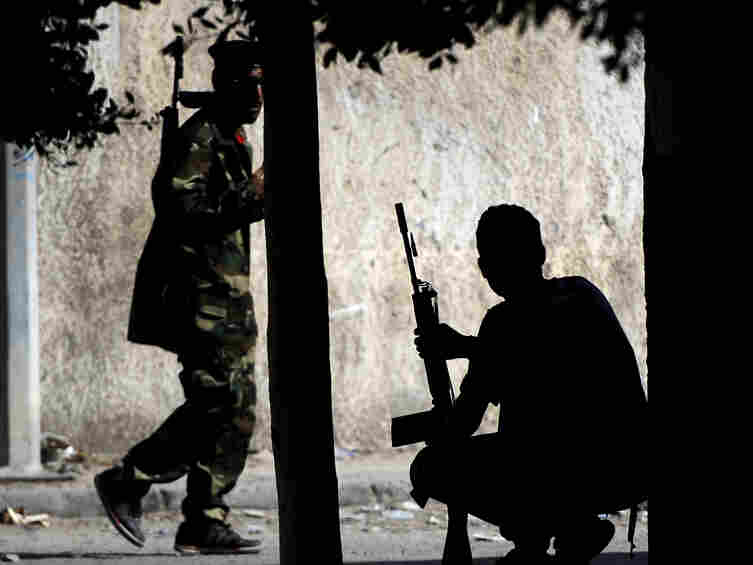 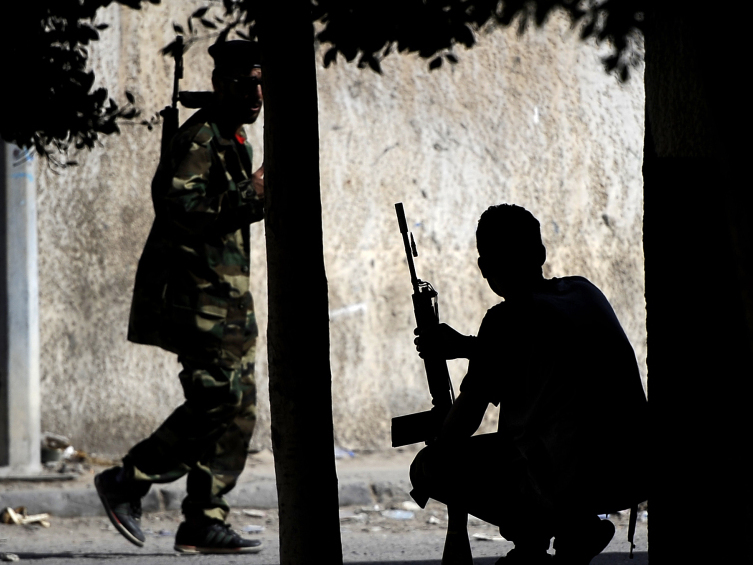 The news that opposition fighters moved into Tripoli over the weekend and have begun to take control of the Libyan capital and perhaps close in on Moammar Gadhafi has raised this question (among others):

Libya's civil war has been going on for six months. Much of the time things have seemed to be at an impasse. What happened in recent days to change the picture?

Here's some of the reporting on that:

-- "Surveillance And Coordination With NATO Aided Rebels": "American and NATO officials cited an intensification of American aerial surveillance in and around the capital city as a major factor in helping to tilt the balance after months of steady erosion of Col. Muammar el-Qaddafi's military. The officials also said that coordination between NATO and the rebels, and among the loosely organized rebel groups themselves, had become more sophisticated and lethal in recent weeks." (The New York Times)

-- As Bombing Weakened Gadhafi's Forces, Opposition Organized: "It took five months after the NATO air strikes began before rebel forces entered Tripoli. Col Gaddafi's forces were a real army with heavy weapons, while the rebels were a bunch of civilians who had managed to get hold of some light arms such as AK-47s. It took a while for the bombing campaign to significantly reduce the government's military advantage and for the rebels to be organised into a proper fighting force. In the end, they advanced on Tripoli from three fronts, surrounding the coastal city, where they were met by jubilant crowds. Many were surprised at how little resistance they met outside the capital." (BBC News)

-- NATO Attacks Intensified; Deadline Loomed: "NATO warplanes have flown nearly 20,000 sorties in the past five months, including about 7,500 strike attacks against Gadhafi's forces. The jets have hit at least 40 targets in and around Tripoli in the past two days. This was the highest number on a single geographic location since the bombing started more than five months ago, officials said. ...

"NATO officials deny there has been a fundamental shift in tactics in recent days to provide close air support to the advancing rebels. ... But they acknowledge that in response to new developments, alliance bombers have been pummeling Gadhafi's troops holding defensive positions even when they were only trying to stem the progress of the rebels.

"Alliance's military planners have [also] been racing against a deadline next month, when member states must vote on a second three-month extension of the mission. The bombing campaign has been criticized as detracting resources from NATO's main mission, the 10-year war in Afghanistan." (The Associated Press)

-- A "Secret Allegiance?" "One reason for the rebels' startlingly rapid entrance into Tripoli – which had long seemed impregnable – was reported to be the secret allegiance of the commander of the special battalion guarding the capital. Senior rebel official Fathi al-Baja told the Associated Press that the commander's brother had been killed by the regime years ago, and that he had been loyal to the rebels. When opposition forces reached the gates of Tripoli, the battalion promptly surrendered. (The Guardian)

-- "Libya's Gritty Mountain Rebels May Have Turned Tide In Tripoli": "The push by guerrilla fighters from Libya's isolated Berber highlands, the rugged Nafusa Mountains near the Tunisian border, was one front too many for Kadafi's depleted and sometimes demoralized forces." (Los Angeles Times)

As events unfold, it's important to remember that while the U.S., it's NATO allies and opposition leaders believe it's only a matter of time before Gadhafi is captured, as NPR's Lourdes Garcia-Navarro reported from Tripoli earlier today on Morning Edition, everything is a "bit messy" at this point and exactly how things will play out isn't known.

(Note: NPR follows Associated Press style on the spelling of Gadhafi's name. Other news organizations have their own style.)