Accessibility links
Libya: Latest News : The Two-Way Opposition forces are in Tripoli. It looks as if Moammar Gadhafi's regime could fall at any moment. 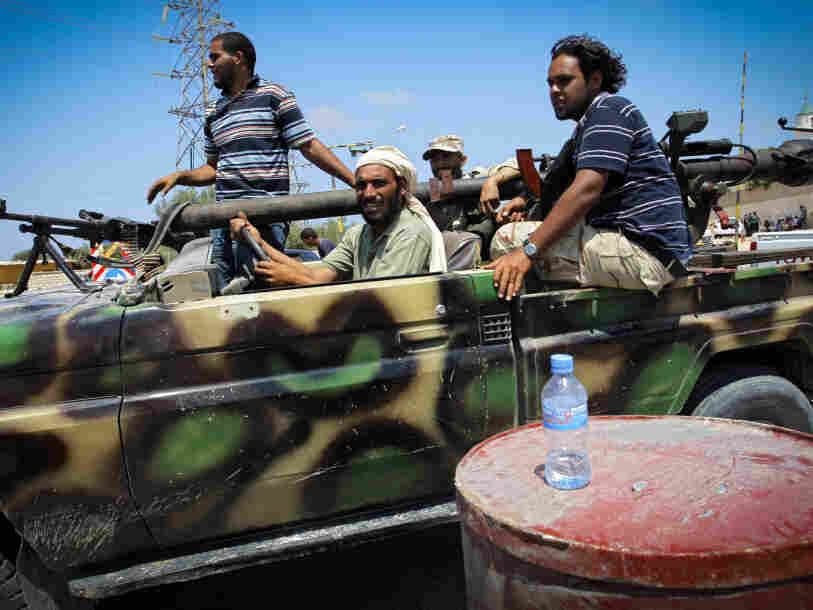 Libyan rebel fighters sped towards the front line of fighting in the village of Al-Mayah, just west of Tripoli, on Sunday. Sergey Ponomarev/AP hide caption 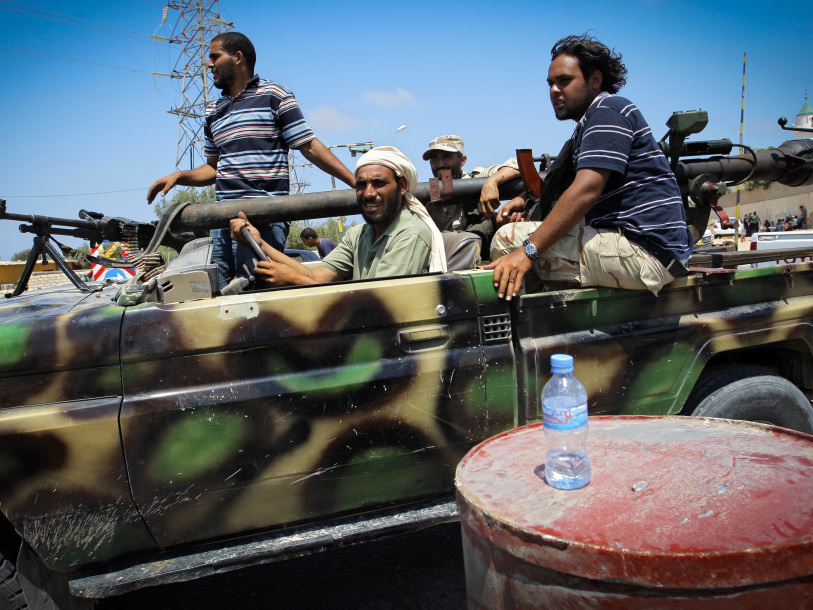 Libyan rebel fighters sped towards the front line of fighting in the village of Al-Mayah, just west of Tripoli, on Sunday.

Events are moving quickly in Libya, where over the weekend opposition forces entered Tripoli. They may be closing in on leader Moammar Gadhafi, though there's no certain word on his whereabouts.

NPR.org's constantly updated news story is here. And we'll be updating this post with developments. Hit your "refresh" button to be sure you're seeing our latest additions.

Reuters reports that a rebel spokesman told Al Jazeera television today that the fight for Gadhafi's Al-Aziziyah compound will be tough:

"I don't imagine the Bab Al-Aziziyah compound will fall easily and I imagine there will be a fierce fight," Abdel Hafiz Goga, spokesman for the rebel National Transitional Council, said in an interview aired by the broadcaster.

"The rebels are forming checkpoints at the entrances of Tripoli and I do not think he (Muammar Gaddafi's son Mohammad) would be able to escape Tripoli, and the same applies to Colonel (Muammar) Gaddafi," he said.

The BBC just posted video of one of its correspondents driving through the streets of Tripoli. What he finds is both a city celebrating the fall of Gadhafi and city a city that is "far from safe and secure."

Toward the end of the video, the convoy the reporter is traveling with drives into an ambush, where pro-Gadhafi forces fire upon them.

The Guardian reports that throughout the day, the battle for Tripoli has increasingly become a manhunt for Gadhafi. The paper reports:

Government troops kept up resistance in some areas of the city, but were pummeled by Nato warplanes, which struck at least 40 targets in and around the city in 48 hours – the most intense bombing since the air campaign started more than five months ago.

By nightfall the battle was focused on the wreckage of Gaddafi's central stronghold, Bab al-Aziziya. The compound has already been nearly flattened by earlier Nato sorties, but it is believed to sit atop a network of reinforced tunnels and underground bunkers.

Crowds gathered in Tripoli's Green Square to celebrate the arrival of the rebels at one point, but many other residents stayed indoors while street fighting continued in other districts. The head of the opposition National Transitional Council (NTC), Mustafa Abdel Jalil cautioned journalists at the rebel headquarters in Benghazi: "The real moment of victory is when Gaddafi is captured."

In a recorded statement, President Obama said while the situation in Libya remains "fluid" and "uncertain" what's clear is that "the Gadhafi regime is coming to an end."

The president promised the United States will help the Transitional National Council during its transition and will step up its humanitarian efforts.

"An ocean divides us but we are joined" by human yearning for freedom, the president said. He said what the world has learned in Libya is that "fear can give way to hope."

We will have full audio of the president's speech in a few minutes.

CNN's Sara Sidner reports a little more on the situation in Tripoli. She echoes what NPR's Lourdes Garcia-Navarro reported earlier:

CNN's Sara Sidner reported that snipers were shooting from the rooftops near Green Square at "anyone that moved."

"We moved out because ... we don't know exactly where those snipers are," she said.

Sidner, who moved towards a coastal road that brings supplies into Tripoli, said that the situation was still unstable in some areas.

"You never know when you're going to turn a corner and find a tank" in Tripoli, she added.

Rebels waived flags and shot into the air behind Sidner and she reported live on CNN.

President Obama was scheduled to tape a statement at 2 p.m. ET. We'll bring you that once it is available.

NPR's Lourdes Garcia Navarro reports that now that the euphoria from last night has died down, the reality in Tripoli is that it is "still extremely volatile."

Lourdes reports that today the rebels were trying to secure their positions and set up bases. She said in one case they were trying to set up a base at a military academy for women, when after an hour and a half, Gadhafi loyalists attacked. They started lobbing artillery and a couple of journalists were hurt.

"Tripoli seems to be very tense and very far from in rebel hands," said Lourdes.

Even Green Square, which the rebels renamed Martyr Square after they claimed to have taken over it last night, seems to be in flux now. Lourdes said she tried to make her way to it today, but rebels told her it wasn't secure.

One of the big issues, reports Lourdes, is that in neighborhood after neighborhood she has heard that Gadhafi loyalists have taken sniper positions. So it seems, "loyalists have not given up the fight, they are just maneuvering now in a different way."

NPR's Lourdes Garcia-Navarro talked to our Newscast unit a bit ago and she says if the rebels are not in full control of Tripoli, it is only a matter of time. She says the Gadhafi regime has been rendered inoperable and that the regime's spokesman, Moussa Ibrahim, who had been holding court at the Rixos hotel where foreign journalists have been staying, has fled.

Lourdes says that the rebels have been moving through Tripoli in a more systematic way, today. They've been clearing out areas of Gadhafi loyalists and have encountered some fierce fights.

Lourdes reports the biggest battle is being fought outside Bab al-Aziziya, Gadhafi's compound. The AP reports that tanks opened fire at rebels as they tried to storm the compound.

We've strung together a bit of audio from Lourdes' report:

The AP reports that a Pentagon officials said the U.S. believes Moammar Gadhafi is still in Libya.

"We do not have any information that he has left the country," Defense Department spokesman Col. Dave Lapan said.

However, Assistant Secretary of State Department Jeffrey Feltman told the press agency that U.S. officials "do not know where Gadhafi is."

"As for the other four sons, we think they are either hiding or they have run away," said Guma El-Gamaty, the Britain-based coordinator for Libya's Transitional National Council.

Mohammad Gadhafi was captured while he was on the phone with Al Jazeera.

As we write this at 8 a.m. ET, here are some of the latest headlines: