Accessibility links
Where Is Moammar Gadhafi? : The Two-Way Both the U.S. and the rebels say they don't know where the Libyan leader is. But there are only a few places where he could likely seek asylum.

Where Is Moammar Gadhafi?

Where Is Moammar Gadhafi? 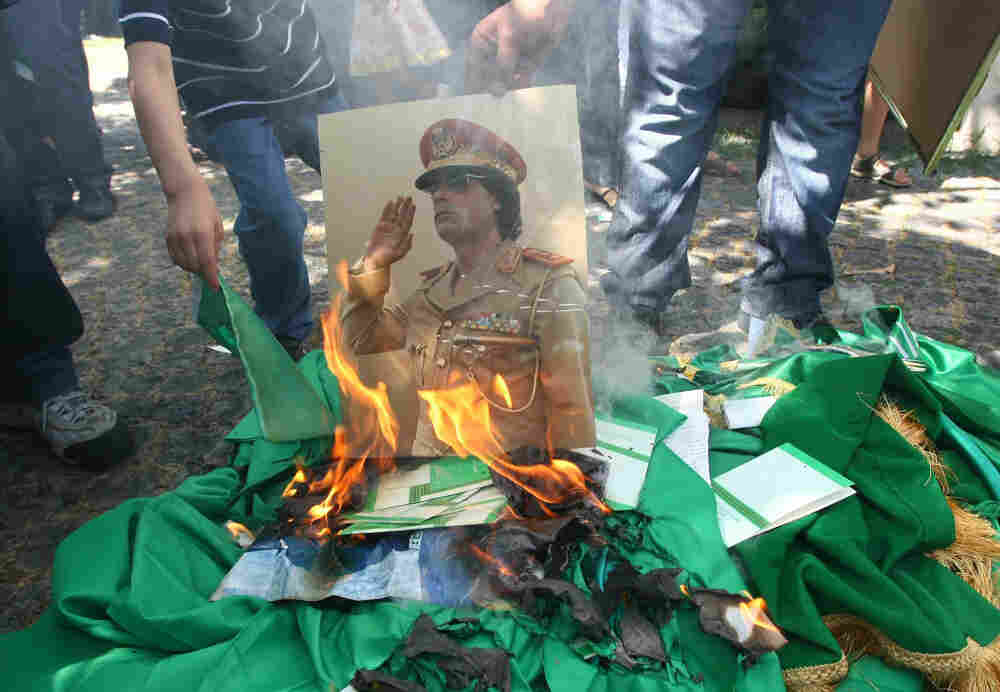 Protesters burn a portrait of Libyan leader Moammar Gadhafi and copies of his Green Book outside the Libyan Embassy in Ankara, Turkey, on Monday. Adem Altan/AFP/Getty Images hide caption 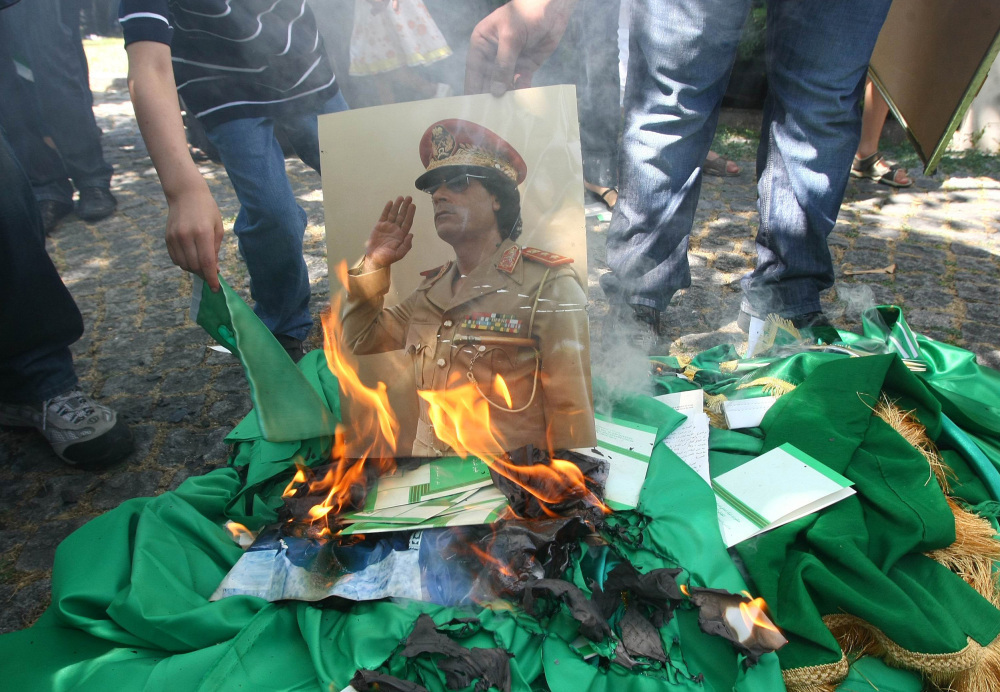 Protesters burn a portrait of Libyan leader Moammar Gadhafi and copies of his Green Book outside the Libyan Embassy in Ankara, Turkey, on Monday.

The nearly 42-year rule of Moammar Gadhafi seems to be at a tenuous spot. Rebels claim they control most of Tripoli and claim three of Gadhafi's sons have been captured, including Saif al-Islam Gaddafi, who was considered Libya's heir apparent.

The focus of the fiercest fighting, today, is occurring just outside the Gadhafi compound in Tripoli. According to the AP, Rebels were trying to storm the Bab al-Aziziya command center when tanks opened fire, which led to the big question: Where is Moammar Gadhafi? Is he in Bab al-Aziziya or is he even in Libya?

Officially, the U.S. and the rebel forces are saying they simply don't know.

"Bab al-Aziziya and the surrounding areas are still out of our control," CBS News quotes rebel leader Mustafa Abdul-Jalil as saying at press conference in Benghazi. "We have no knowledge of Gadhafi being there, or whether he is still in or outside Libya."

As we reported in the live blog, the Pentagon said it doesn't believe Gadhafi has left Libya. "We do not have any information that he has left the country," Defense Department spokesman Col. Dave Lapan said.

British Prime Minister David Cameron told reporters today that there is "no confirmation" about where Gadhafi is.

Yesterday, the National Transitional Council offered Gadhafi safe passage if he decided to leave the country, but there hasn't been any word on whether that offer still stands.

The Telegraph's Matthew Holehouse reports today that most people in Tripoli believe Gadhafi is indeed holed up in his Bab al-Aziziya, but others believe he might have fled to either Sahba, his ancestral home; Sirte, his birthplace; or to Algeria.

As to where Gadhafi could seek asylum outside of Libya, The Washington Post published a quick guide, awarding the top choice to Uganda. The Post reports:

This East African nation was the first to suggest that Gaddafi could plop down inside its borders. "We have soft spots for asylum-seekers," a spokesman for Ugandan President Yoweri Museveni said this past week. "Gaddafi would be allowed to live here if he chooses to do so." Museveni, who has been in power for 25 years, has condemned the NATO-led mission in Libya.

The problem could be that Uganda has signed on to the International Criminal Court, which means they would have to turn Gadhafi over, as Malta has said they would do if he heads that way.

The Daily Beast put together another list, which puts Zimbabwe at the top of the list and South Africa as a possibility. South African president Jacob Zuma made two attempts to get Gadhafi to declare a ceasefire.

Outside of Africa, there is always Venezuela. President Hugo Chavez has pledged allegiance to Gadhafi and, yesterday, he strongly criticized foreign intervention in the country.

Our colleague Liz Halloran talked to David Mack, a former U.S. diplomat who served throughout the Middle East. Mack said he believes Gadhafi would choose to live in exile.

"I think that eventually, provided he's offered safe asylum somewhere for himself and members of his family not already captured, he might be inclined to take it," Mack said. "It would have to be someplace like Russia, where the United Nations Security Council could make the request, and provided he'd be exempt from International Criminal Court tribunals. Someplace that could be strong and stable enough to keep him from getting in trouble and keep him safe. I think that the Russians want to be in on the end game. Our role would be to provide international endorsement, and to save Libyan lives."