Accessibility links
5.8 Magnitude Earthquake Rattles East Coast : The Two-Way The temblor, centered about 100 miles southwest of Washington, D.C., shook buildings and rattled nerves up and down the East Coast. Phone services and airports were affected, but early reports indicated damage was minimal. 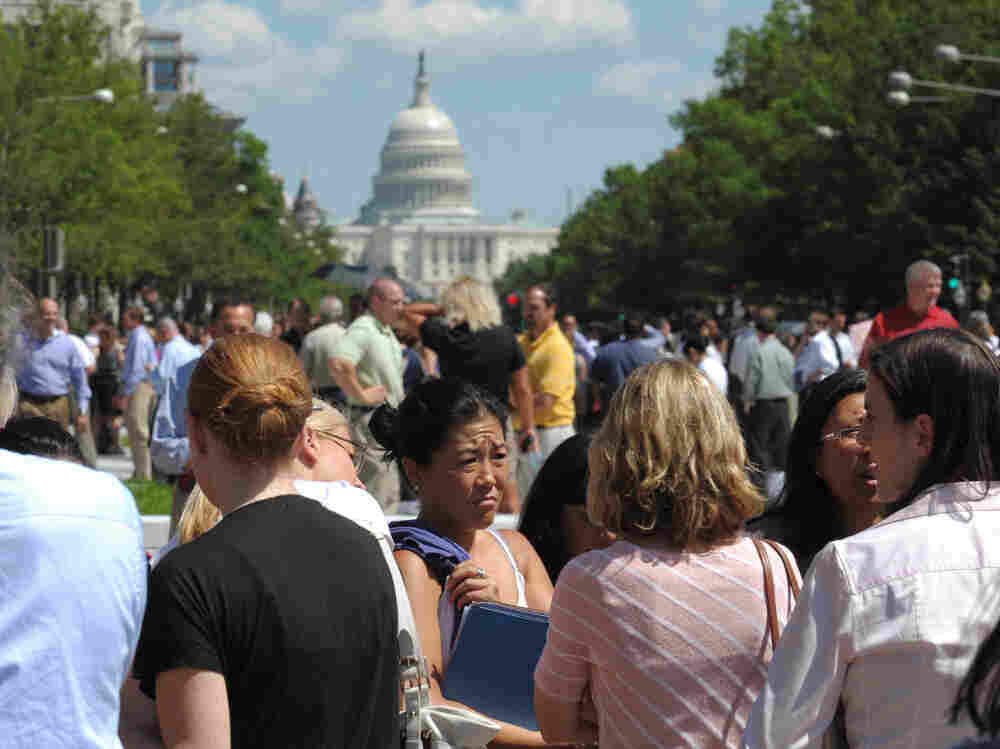 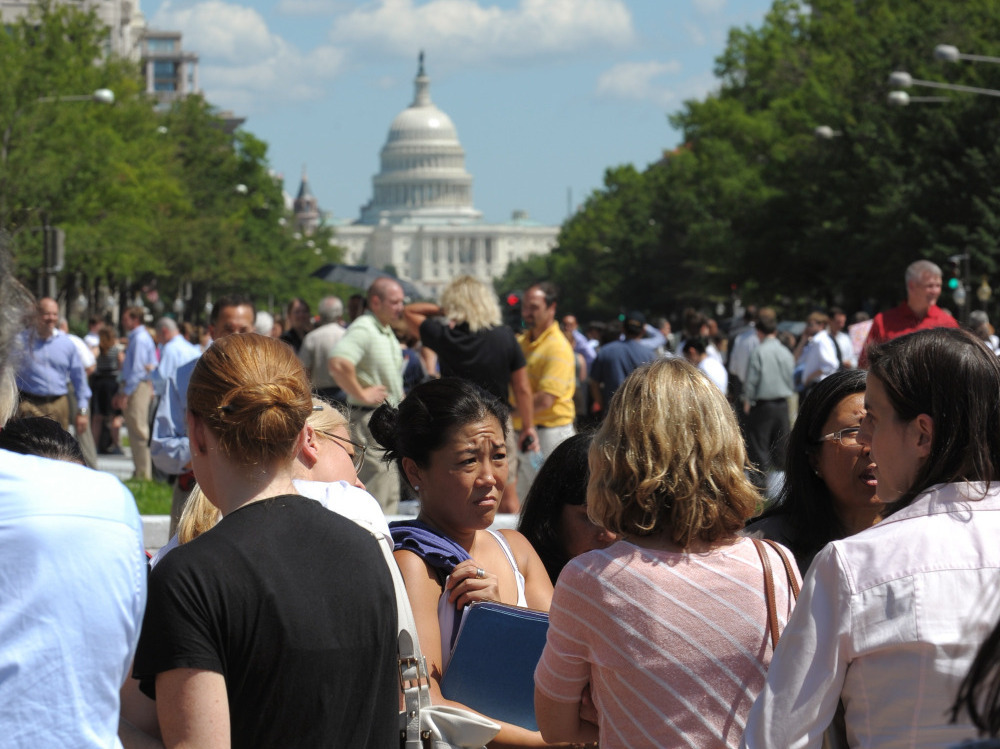 People gather on Freedom Plaza in Washington, D.C., after a earthquake on Tuesday.

The East Coast of the United States got a rare jolt this afternoon when an estimated 5.8 magnitude earthquake centered in Virginia shook buildings and rattled nerves from the Carolinas to New England.

The United States Geological Survey says the earthquake happened at 1:51 p.m. ET with an epicenter nine miles south of Mineral, Virginia and had a depth of 1 km. 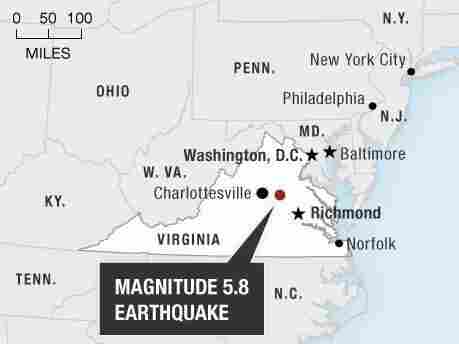 At NPR headquarters in Washington, D.C., about 83 miles northeast of the epicenter, the building swayed for a few seconds. Many of buildings in the downtown area were evacuated. There were no immediate reports of damage, but in an area unaccustomed to earthquakes, people were surprised and shaken.

The quake was much closer to Richmond, Va., which was only about 40 miles from the epicenter, but according to the Richmond Times-Dispatch so far there have been no reports of damage.

There were no immediate reports of damage as buildings were cleared throughout Richmond and other cities in Virginia, but within minutes, Richmond police began receiving calls about possible property damage. Those calls included a possible collapsed wall at a house along East Broad Street in the city's East End and a possible wall collapse at a structure along Hioaks Road in South Richmond.

We'll be updating this post. Hit your "refresh" button to see our latest additions.

The Associated Press is reporting that engineers from the National Park Service have found a crack near the top of the monument.

Park Service spokesman Bill Lane said the crack, which was found where the 555-foot landmark narrows, will result in the monument being closed indefinitely. Lane said an outside engineering service will study the crack Wednesday.

Which brings up one of the many earthquake-related jokes making the rounds on Twitter:

"MSNBC says the Washington monument is leaning to left. Fox news says its to the right." (@jeffheimbuch)

The National Cathedral in Washington, D.C. sustained "significant damage," it said in a press release. Three of the four corner spires on the central tower were damaged.

"Specifically, three 'finials' (capstones shaped like fleurs-de-lys) have fallen from them, with more significant damage to two of the pinnacles. Similar decorative elements on the Cathedral's exterior also appear to be damaged. Cracks have appeared in the flying buttresses around the apse at the Cathedral's east end, the first portion of the building to be constructed, but the buttresses supporting the central tower seem to be sound."

Luckily no one was injured.

-- The Washington Post: "A senior Obama administration official said the White House 'shook pretty hard' and that employees evacuated onto the driveway between the White House and the Eisenhower Executive Office Building. Construction workers also got off scaffolding wrapped around the EEOB. Employees fled the U.S. Capitol, and House and Senate office buildings were evacuated, as tremors shook the buildings for several seconds."

-- Baltimore Sun: "In Baltimore, 113 miles from the epicenter, the quake startled many, rattling pictures off walls and sending downtown workers into the streets. In Annapolis, tremors shook plaster off the ceiling in parts of of the historic State House. Baltimore police said on Twitter that there have been no injuries reported in the city."

-- Philadelphia Inquirer: "Tall buildings from Center City, to Wilmington and Atlantic City were evacuated, including Philadelphia City Hall. Phone circuits were jammed after the ground shook around 1:55 p.m. and police urged residents not to call 911 except in an actual emergency. Anyone smelling fumes should call 311 or the Philadelphia Gas Works. There are no immediate reports of any serious injuries."

-- New York Daily News: The quake "sent thousands of people running out of swaying office buildings across the city and briefly grounded flights at Kennedy and Newark airports. ... No problems were reported with the MTA's bridges and tunnels or the subway, but flights at Newark and Kennedy Airports were briefly delayed as a precaution."

Barbara Wainman, a spokeswoman for the USGS, says this earthquake is definitely in historic range. As Mark noted earlier, it is slightly smaller than 5.9 earthquake in 1897. Wainman says the biggest earthquake to strike the East Coast happened in the late 1800s in South Carolina. That was a magnitude 7 earthquake.

The Associated Press writes that "shaking was felt at the White House and all over the East Coast, as far south as Charleston, South Carolina."

The USGS has several historical notes posted about Virginia's earthquake history. Here, it reports that "the largest damaging earthquake (magnitude 4.8) in the seismic zone [where today's was centered] occurred in 1875." Elsewhere, it writes that "the largest earthquake to originate in Virginia in historic times occurred on May 31, 1897," in the southwestern part of the state." That temblor had an estimated 5.9 magnitude, meaning it was slightly stronger than today's.

Stars and Stripes writes that:

"The Pentagon violently shook during Tuesday's 5.9-magnitude earthquake in Arlington, Va., as thousands of employees and visitors ran full speed for the exits.

"Reporters in the second-floor media filing center felt some initial swaying and as some quickly noted they had felt no 'boom' to indicate any explosions (or ever-feared plane crashes) the walls began to roll back and forth more intensely, causing a rush for the doors."

So far the reports of damage have been minimal but the The Washington Post reports a building collapse in the Southeast part of the city:

A congressional staffer reported that a portion of a building collapsed on the 300 block of Pennsylvania Avenue in Southeast.

"A huge dust cloud came from the BBT building," he said, and "the people who came out of it said the back collapsed." The staffer said he was a pizza place and that "the entire ground literally moved up and down — you could see it."

The Richmond Times-Dispatch reports that after the earthquake, people started calling 911 to report possible damage:

The Washington Post reports that "the tip of the National Cathedral in Washington spire crashed onto the steps on Pilgrim Road. Three of the four pinnacles of the central tower are down and there's significant damage, said spokesman Richard Weinberg. No injuries were reported." 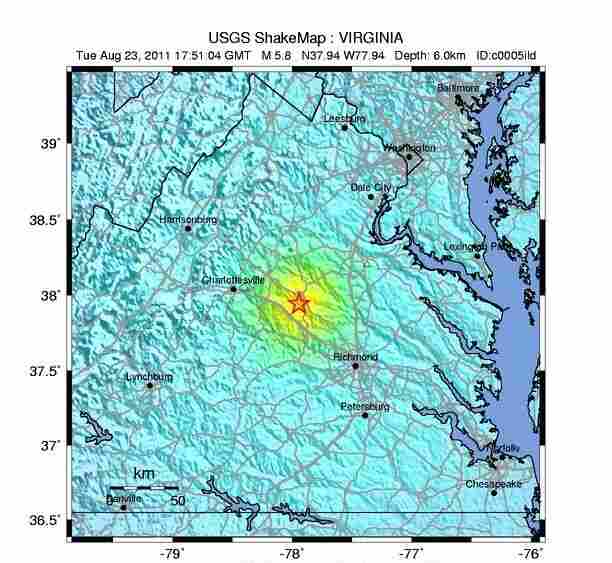 Meanwhile, according to the USGS, there was a 2.8 magnitude quake in the same area of Virginia at 2:46 p.m. ET.

The USGS released this map that shows "instrumental intensity." It shows the epicenter was between Richmond and Charlottesville:

There are two nuclear reactors at the North Anna Power Station in Louisa County, Va., not too far from the earthquake's epicenter. The Associated Press reports that federal officials say the reactors "were automatically taken off line by safety systems around the time of the earthquake" and that the plant is "being run off of four emergency diesel generators."

The company confirms on its Twitter page that "both reactors at North Anna Power Station were shut down safely with no reports of damage."

David McIntyre, spokesman for the U.S. Nuclear Regulator Commission, tells NPR there is usually enough diesel fuel for the generators to run for at least a week.

Another nuclear power plant in Virginia, as well as plants in Maryland, North Carolina, Pennsylvania and New Jersey felt the temblor but did not shut down, McIntyre said.

Clough said it this was a big earthquake and he's experienced quite a few on the West Coast, he said.The problem in the area, he said, is that the construction is not made to withstand earthquakes. He said the Castle was built in 1881 with brick that was not reinforced, so they've decided to close the the building and will have it structurally inspected.

At the time of the quake, Clough said, he was in a meeting and he felt the tell tale sings of an earthquake, including the see-saw motion.

In Washington, D.C., Anita Fogan was at her job with the United States Mint, "when I thought our building got hit by a wrecking ball from the construction site next door. Then, I heard things falling off shelves and thought 'Oh, my God, this is an earthquake.' That's when I got out of the building."

As we said earlier, earthquakes, especially this strong, are rare in the area. According to the USGS, "the largest damaging earthquake (magnitude 4.8) in the seismic zone occurred in 1875. Smaller earthquakes that cause little or no damage are felt each year or two.