Accessibility links
Why A Quake In Virginia Isn't As Rare As It Sounds : The Two-Way Despite rattled office workers from Virginia all the way to New York and beyond, the quake that struck the East Coast Tuesday wasn't all that unusual — only its size was, geologists say. Here's a look at the science behind the temblor.

Why A Quake In Virginia Isn't As Rare As It Sounds

Why A Quake In Virginia Isn't As Rare As It Sounds 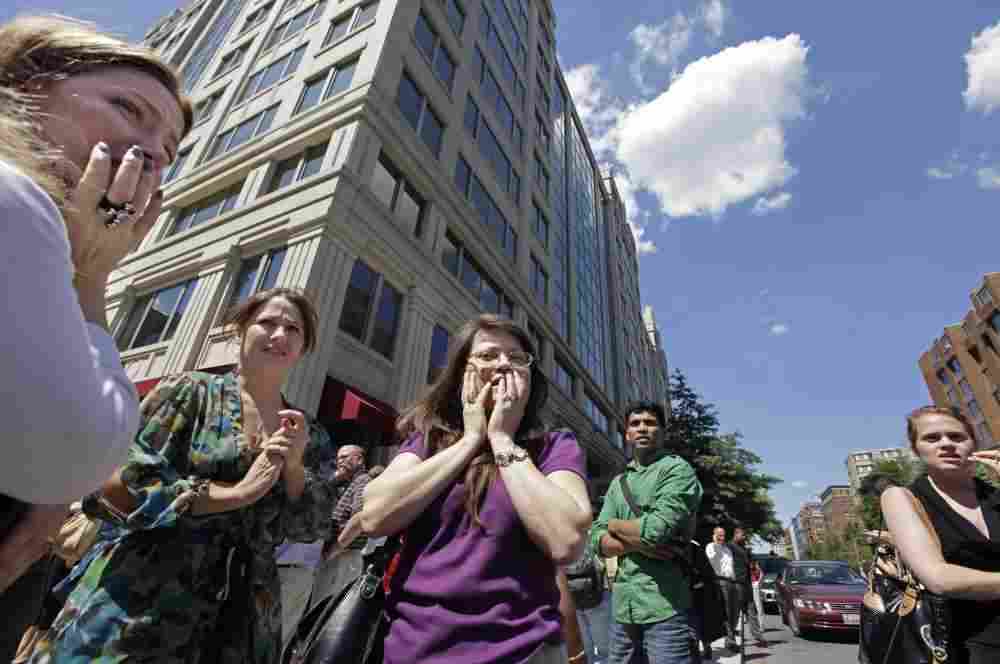 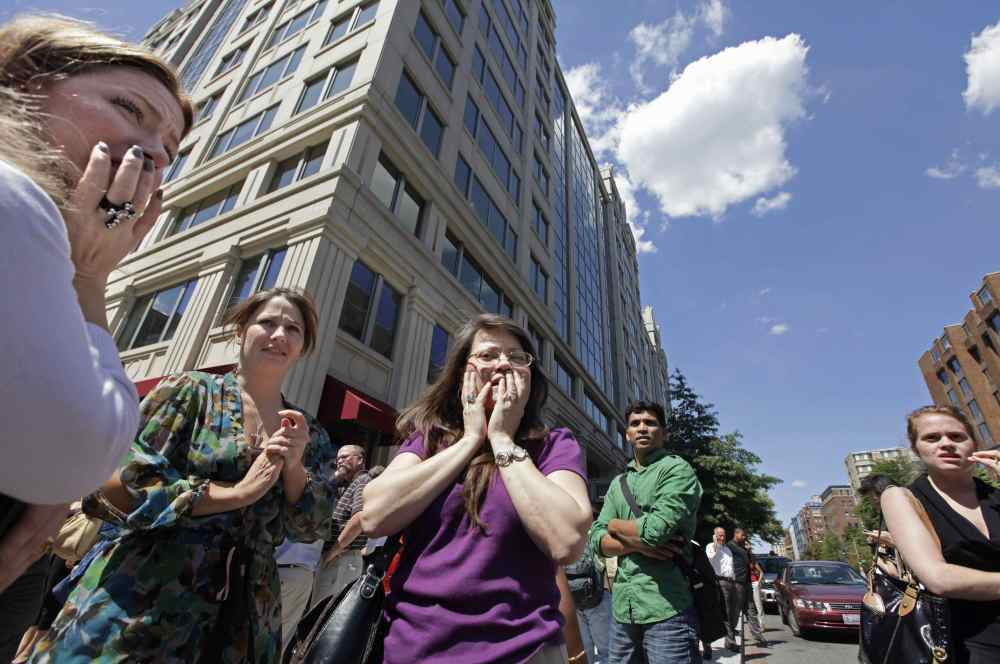 Office workers gather on the sidewalk in downtown Washington, Tuesday, moments after a 5.8 magnitude tremor shook the nation's capital.

The earthquake that rattled the East Coast on Tuesday afternoon — from its Virginia epicenter to Washington, D.C., and the islands off Massachusetts — was, indeed, rare, geologists say.

But only because of its size; at a magnitude of 5.8, it was the largest temblor to hit Virginia since 1897, when the largest quake on record, a 5.9 quake, struck.

"Earthquakes in central Virginia are not very unusual," says David Spears, Virginia's state geologist. "We have them every few years, but they're usually in the 2-to-4 magnitude range."

"We felt rather severe shaking, windows were rattling, chairs were moving, and people were running out of the building," said Spears, whose office is in Charlottesville, about 25 miles from the epicenter, near the town of Mineral. "My first thought was, 'This is an earthquake and a big one.'"

But it was big in a very East Coast way, its tremors felt far from the epicenter. It wasn't one of those undulating, earth-cracking quakes that hit California.

California is a tectonically active area. The state is situated along the San Andreas Fault, where the North American and Pacific tectonic plates meet.

Virginia sits about smack in the middle of the North American plate, where "intra-plate seismicity" — that is, seismic activity within a plate itself, rather than at a plate boundary — causes the occasional earthquake.

"Generally, earthquakes here are less severe because we don't have the horizontal tectonic forces that are locked up at plate boundaries," Spears says.

The eastern edge of the North American plate is in the middle of the Atlantic Ocean.

East Coast earthquakes are typically felt in a wider area than those in California. That's because the Earth's crust is more solid in the East, and it carries seismic waves better than in the more fractured West Coast crust.

The Earth's crust has ancient faults in many places, "but most of them don't move very much," John Vidale, a seismologist at the University of Washington, told NPR.

"The mystery is really what's pushing the faults to make it move now — and there are a lot of theories," Vidale says.

Among them, he says: leftover stress from when the glaciers were here and then retreated, some 10,000 years ago; and the gradual deformation that occurs continuously with plate tectonics.

Out in the Atlantic, the ocean floor is essentially spreading out from a crack in the Earth called the mid-Atlantic ridge. Christopher Bailey, chairman of the geology department at the College of William and Mary, says scientists think this activity is pushing on the North Atlantic plate, shoving it up and back, toward the northwest. "So in essence, we're re-breaking old faults," he told NPR.

And there are a number of those old faults all along the East Coast. In Virginia, Spears says, there are three major faults that are related to changes in the Atlantic Ocean that took place about 200 million years ago.

"An area of central Virginia, along a line that runs from Fredericksburg to Greensboro, N.C., used to be a plate boundary," Spears said. "Perhaps there's some leftover stress in the crust."

Whatever the cause, the event, which paled in comparison to devastating events like the 9.0-magnitude March disaster in Japan, nonetheless provided many in the region with their first nerve-rattling earthquake experience.

Liz Halloran is a Washington correspondent for NPR.