Accessibility links
Irene On Track To Soak N.C., Barrel Toward New York : The Two-Way Though the hurricane has weakened slightly and its projected track has been nudged east just a bit, it's still headed for what could be a devastating collision with the East Coast of the U.S. 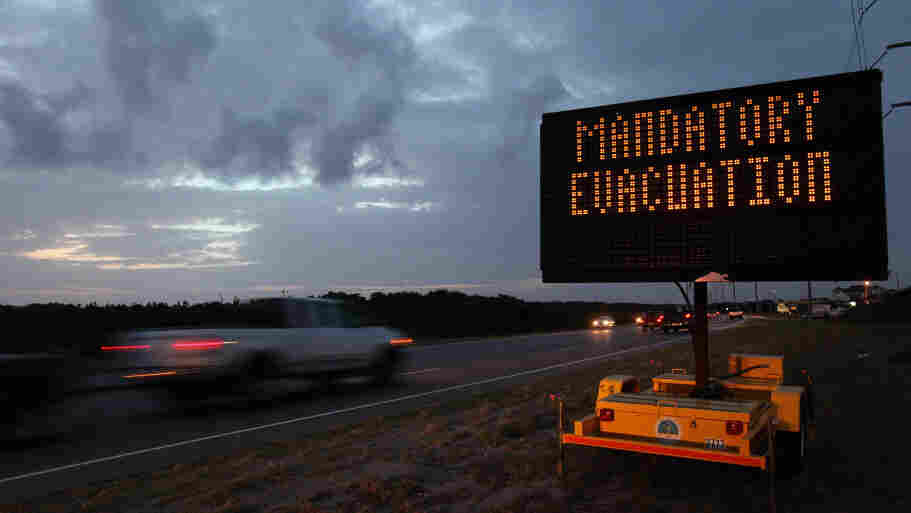 Head inland: Nags Head, N.C., is among the many communities along the East Coast that are, or have been, evacuated as Irene draws near. Scott Olson/Getty Images hide caption 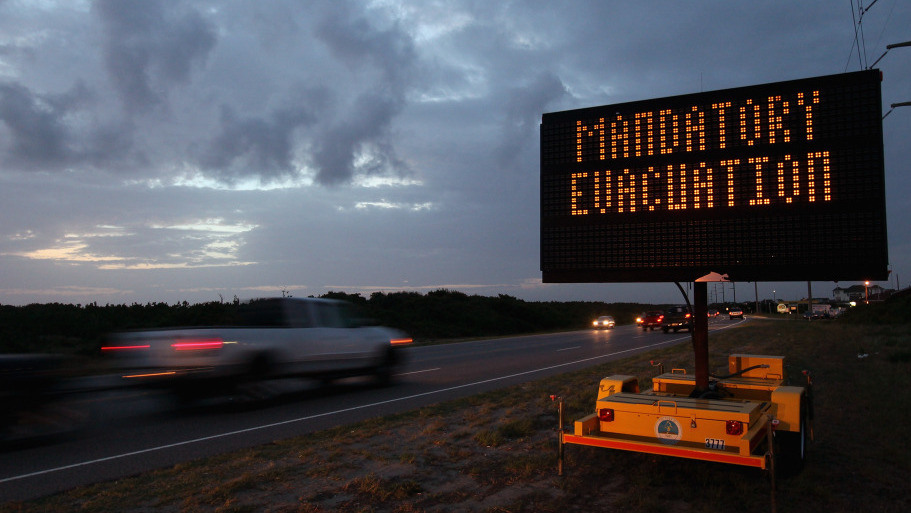 Head inland: Nags Head, N.C., is among the many communities along the East Coast that are, or have been, evacuated as Irene draws near.

Though Hurricane Irene has weakened slightly and its projected track has been nudged east just a bit, it's still headed for what could be a devastating collision with the East Coast of the U.S. that will affect tens of millions of people from North Carolina to New England over the weekend.

According to the latest advisory from the National Hurricane Center, Irene is now a Category 2 hurricane (meaning its winds are between 96 and 110 mph). That means it has weakened slightly since this time Thursday, when it was a Category 3.

But, the Hurricane Center warns, "Irene is expected to be near the Category 2/3 boundary when it reaches the vicinity of [North Carolina's] Outer Banks" very early on Saturday. From there, it will head north along the coast and is likely to take "dead aim" on New York City on Sunday. Mayor Michael Bloomberg has said he may order a mandatory evacuation of the city's low-lying areas, including parts of lower Manhattan.

Utilities, such as the Washington area's Pepco, are "already warning customers that they could be without power for some time," The Washington Post reports.

We will be following developments through the weekend.

Local news along the path of the hurricane:

-- Jacksonville Daily News has a live blog of all things hurricane.

-- Eastern North Carolina's WITN has local news and a bevy of webcams.

-- The Virginian Pilot has extensive coverage, including live radar.

-- NPR member station WBUR has tons of coverage of Boston and has put together a Twitter list of local meteorologists.

From the National Hurricane Center:

-- If you have questions about hurricanes, which one is the biggest, deadliest, costliest, the NHC has answers in this document (pdf).

-- Here's a site with the latest global weather models.

-- StoryfulPro has put together a list of reporters, organizations and government officials in the path of the storm.

If you're a weather nerd, here's a list of storm chasers who provide detailed meteorological information and stunning first hand images and narrative form the eye of the storm :

And let's not forget a link to FEMA's storm preparation guide.

In its latest story, the AP says local authorities across the United States have ordered the evacuation of 2.3 million people. That's stunning. Jay Baker, a geography professor at Florida State University puts it in context for the AP:

"This is probably the largest number of people that have been threatened by a single hurricane in the United States," he said.

As there was earlier, there's some good news and some bad news:

First the good: The Hurricane Center says the inner core of Irene has "eroded." That means they are fairly confident the storm won't intensify before it makes landfall.

The bad: The storm is expected to move very slowly as it approaches Long Island, which means it will "produce extended periods of tropical storm and hurricane-force winds in many areas."

In its latest update, the Hurricane Center says "maximum sustained winds have decreased to near 100 mph," vs. the "near 105 mph" of earlier today. It also now says that after Irene reaches the coast of North Carolina, "some weakening is expected. ... But [it] is expected to remain a hurricane as it moves along the mid-Atlantic coast on Sunday."

Mayor Michael Bloomberg just announced that his office has issued a "mandatory evacuation order for all New Yorkers who live in low-lying areas." They're to be out of the areas by 5 p.m. ET Saturday. The mayor's office has posted a pdf of "New York City hurricane evacuation zones" here.

In its 11 a.m. ET advisory the Hurricane Center says it has extended the "hurricane warning" for the Chesapeake Bay north about 30 miles. Earlier, the warning area went as far as Smith Point. Now it goes to Drum Point.

But the Center's guidance is also slightly less ominous in one way.

At 8 a.m. ET it wrote that "Irene is a Category 2 hurricane ... some re-intensification is possible today ... and Irene is expected to be near the threshold between Category 2 and 3 as it reaches the North Carolina coast."

At 11 a.m. ET, it wrote that "Irene is a Category 2 hurricane ... [and] little change in strength is forecast before Irene reaches the coast of North Carolina."

"Hurricane Irene's rains began reaching the U.S. East Coast on Friday. ... Rain began falling along the coasts of North and South Carolina as Irene trudged toward the coast from the Bahamas.

"Swells from the hurricane and 6 to 9-foot waves were showing up in North Carolina's Outer Banks early Friday and winds were expected to begin picking up later in the day, said Hal Austin, a meteorologist with the National Weather Service."

From the latest Hurricane Center advisory: