Accessibility links
Hurricane Irene Bashes East Coast After Landfall; Heads To New York : The Two-Way One of the largest and potentially most damaging hurricanes to hit the East Coast in decades is heading slowly north. The storm is expected to pass right over New York City and into New England later this weekend. At least four storm-related deaths have been reported, and more than 630,000 homes and businesses are without power.

(This live-blog is being updated throughout the day. Scroll down for our latest posts.)

Hurricane Irene, one of the largest and potentially most damaging storms to hit the East Coast of the United States in decades, is pounding communities from North Carolina and into Virginia, Maryland and Delaware, leaving hundreds of thousands of homes and businesses without electricity. Irene is moving slowly northward, on a track that's expected to take the storm right over New York City and into New England Sunday.

Although the National Hurricane Center said Irene had weakened from a Category 2 hurricane (maximum winds of 96-110 mph) to a Category 1 (74-95 mph) Saturday, and also "lost some organization," the strong winds, torrential rains and potential storm surges in low-lying areas still make it a highly dangerous storm, authorities said.

"The hazards are still the same," NHC hurricane specialist Mike Brennan says. "The emphasis for this storm is on its size and duration, not necessarily how strong the strongest winds are."

At 5 p.m. ET Saturday, the storm was moving at around 13 miles per hour, with maximum sustained winds near 80 mph, and gusts reported at 115 mph, according to the National Weather Service.

On the NPR Newscast earlier, Brennan added that some mid-Atlantic states' coastal areas are going to experience hurricane conditions for several hours and tropical storm conditions for 24 hours.

More than 2 million people along the coast, including 370,000 in New York City, have been ordered to move away from low-lying areas.

The Hurricane Center predicts that Irene won't weaken into a tropical storm until late Sunday, or possibly Monday. The storm continues to threaten many along the Eastern seaboard, with tropical-storm-force winds extending outward up to 290 miles, according to the NHC.

We've been following the news about Irene all week and will continue to do that through the weekend. We began this post at 6:30 a.m. ET and will keep it updated through the day. Be sure to hit your refresh button to see our latest updates.

We're signing off for the day now — but you can follow NPR's coverage of Hurricane Irene, and track the storm, as well. The Two Way will be live-blogging the storm's effects Sunday morning, as it passes the mid-Atlantic area and closes in on the Northeast.

As we posted earlier, "The Federal Emergency Management Agency says anyone in an evacuation zone who's trying to find the nearest shelter can "Text SHELTER + your ZIP code to 43362."

And this advice came from the Red Cross Twitter feed: "Heading to a shelter? Bring clothes, pillows, blankets, meds, hygiene items & important documents." The service also says not to forget cash and a cellphone charger, and reminds us that sometimes, texts go through carriers' networks when voice calls do not.

Hurricane Irene is making her way back out over the sea near the Virginia-North Carolina border, crossing from land and back over to the Atlantic Ocean, according to the National Hurricane Center. The storm is now expected to move along the mid-Atlantic coast, approaching New York City and southern New England Sunday.

Irene is expected to pick up some speed over the water, possibly reaching parts of Canada by Sunday night or early Monday.

More than 370,000 people are under orders to leave low-lying areas of New York City, where wine stores seem to be doing a brisk business. We wrote about that in a separate post, along with questions about evacuating Rikers Island.

Update at 4:15 p.m. ET. Hundreds Of Thousands Of Power Outages:

With Hurricane Irene bringing winds gusts of up to 115 m.p.h., more than 900,000 (updated at 6 p.m.) homes and businesses are currently without electricity, most of them in North Carolina and Virginia. The storm is currently centered close to North Carolina's Outer Banks, near Great Dismal Swamp.

Reuters reports that the Brunswick nuclear power plant scaled back its power generation, although the plant has not reported any damage.

With many airlines using East Coast airlines as hubs, the effects are expected to be widespread. Amtrak and bus lines are also cancelling travel, as we note in a separate post.

Around 600 senior citizens who live in Atlantic City, N.J., are apparently refusing to evacuate. New Jersey Gov. Chris Christie (R) just made an extraordinary appeal to them to let the state put them on buses so they can get to shelters. We've put up a separate post on that.

The National Weather Service has issued tornado watches for areas along the coasts of Virginia, Maryland, Delaware and New Jersey.

The Weather Channel just showed a graphic that we thought was interesting, so we went to the original source to get our own copy. It's from the National Oceanic and Atmospheric Administration and shows the water level at the Chesapeake Bay Tunnel. 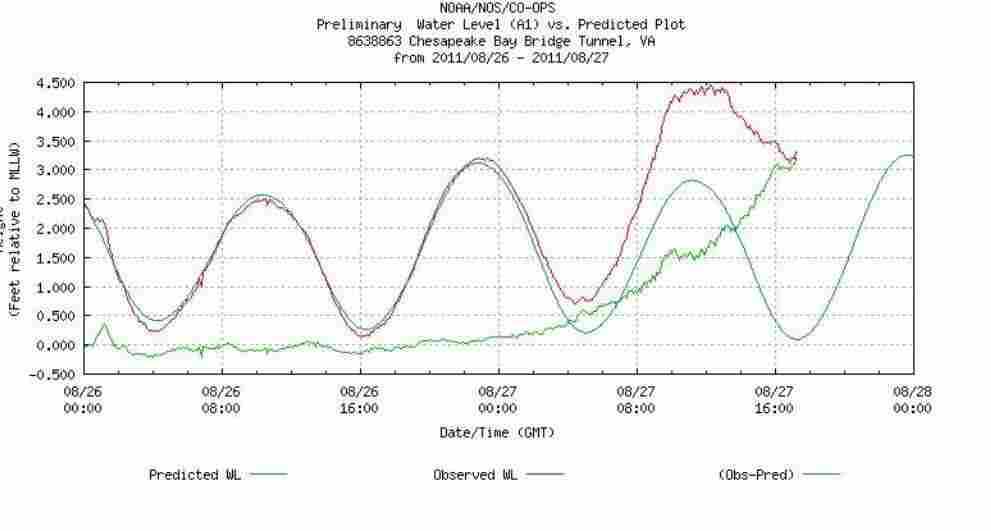 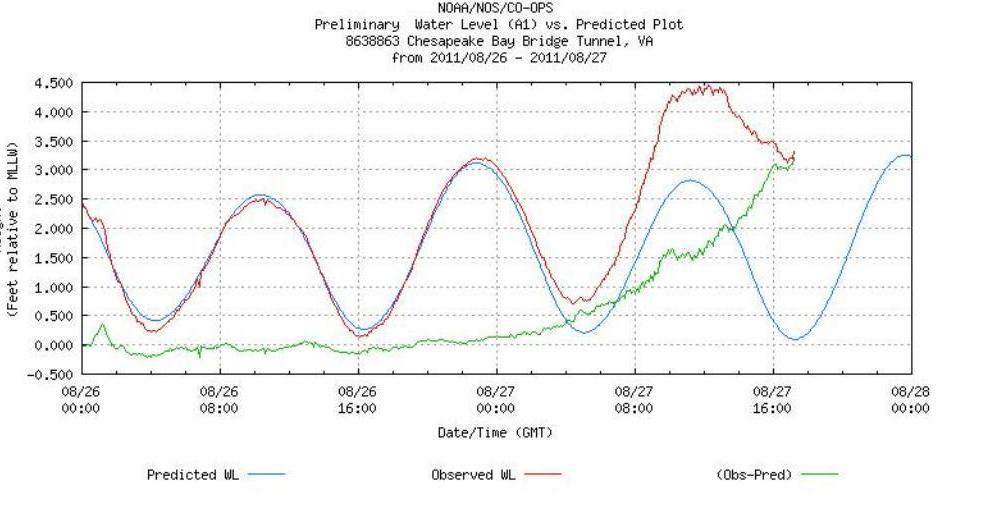 The blue line is the normal rise and fall due to tides. The red line is what's actually happened today — more than a foot and a half of additional water. And the green line measures how much more water Irene has pushed into the bay — even before she has reached the area.

As we said earlier, there have been tornado warnings as Irene has moved north. According to The Virginian-Pilot, "a small tornado touched down in Sandbridge this morning, destroying at least five homes and damaging several others in the beachfront community."

Here's what it was looked like overnight as Irene bore down on Kill Devil Hills, N.C.

Update at 12:30 p.m. ET. Insurers Prepare For Billions In Losses:

From an All Things Considered report by NPR's David Schaper:

"As Hurricane Irene makes its way north, insurance companies are scrambling to get claims adjusters and other personnel in place up and down the East Coast and into New England.

"Companies will be assessing the damage once Irene is through battering the northeastern states. If the hurricane hits as wide an area as is predicted, insured losses could be in the billions of dollars."

Several tornado warnings have come and gone today, and now there's another. The National Weather Service says east central Sussex County in southern Delaware is under a tornado warning until 12:45 p.m. ET.

It's possible there will be more such alerts as Irene continues up the East Coast. To see the National Weather Service's warnings and watches, click here.

Two fatalities in North Carolina are the first Irene-related deaths to be reported in the U.S. We've put a separate post about that here.

For those who like to apply Web tools at times like these, Google's Crisis Response page has a variety of ways to look at the hurricane, including this stunning view.

Update at 11:15 a.m. ET. More From The Hurricane Center — On Why Any Weakening May Not Mean Much:

Though the Hurricane Center now says Irene may lose some strength before reaching New York and New England, it cautions that:

"Whether Irene is a strong tropical storm or hurricane over New England will make little difference in the expected impacts of damaging winds ... a dangerous storm surge ... and flooding rains."

Update at 11 a.m. ET. In Latest Advisory, A Tiny Shift In Emphasis:

The Hurricane Center just reported that Irene's maximum winds are now about 85 mph, and that it is expected to weaken slightly in coming hours. And the Center changed its forecast just a bit to say that Irene is likely to remain "near hurricane strength" as it approaches New York City and New England. Earlier, it said Irene would "remain a hurricane."

The Federal Emergency Management Agency says anyone in an evacuation zone who's trying to find the nearest shelter can "Text SHELTER + your ZIP code to 43362."

North Carolina Gov. Bev Perdue (D), while saying her state has not been hit quite as hard as had been feared, just asked folks to "please stay inside." The state's only about half-way through hurricane-like conditions, she said, and there's great danger from storm surges and flooded highways.

In Hatteras, N.C., Midgett Realty has been posting updates on its Facebook wall. At 9:30 a.m. ET it reported that:

"Power has been off for a few hours now, the storm came in south of us and is running up the Sound. Probably will pass us in about 2-3 hours, that's when we'll know how much soundside surge we'll get. It will be tonight before we get out of the high winds, makes for a long day. Several areas of ocean overwash, let's hope the road bed is intact underneath. We need this wind to switch to offshore."

Update at 9:45 a.m. ET. Mayor Bloomberg To Those In Low-Lying Parts Of His City: Get Moving.

We've published a separate post about warnings that New York City Mayor Michael Bloomberg just gave to the 300,000 or so people in his city's mandatory evacuation zones. Get moving now if you haven't already, he said.

The National Weather Services's radar map shows that the rain and winds are closing in on Washington, D.C., and its suburbs.

It's starting to pour across Delaware and up into New Jersey, The Weather Channel reports.

The Weather Channel reports there are tornado warnings for Virginia Beach and Hampton Roads, Va., until 9:30 a.m. ET.

North Carolina utility Progress Energy reports about 200,000 of its customers in North Carolina are without power. The company has an "outage map" here. 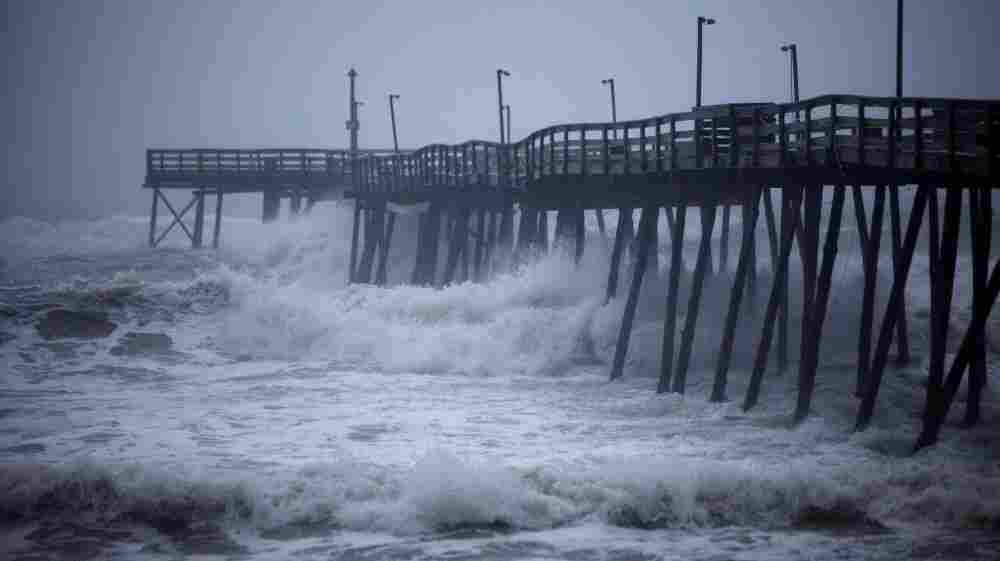 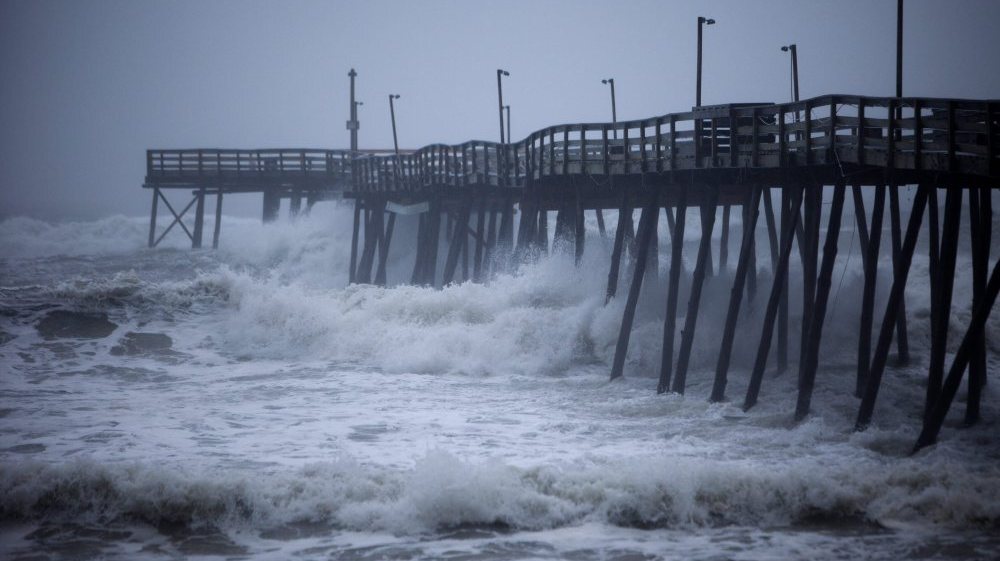 "The end of the pier at Atlantic Beach in Carteret County has collapsed into heavy surf.

"Three buildings in Washington County were damaged from Hurricane Irene this morning, and the flooding is starting.

On Weekend Edition Saturday this hour, host Scott Simon aired a conversation he had earlier today with NPR's Greg Allen, who is in Manteo, N.C.

It was raining hard and winds were gusting up to 50 mph, Greg said. The big fear in the region, he added, is that the "storm surge" as water rises could cause extensive damage. As for whether people paid attention to the order to evacuate, Greg said he saw "hardly a soul" as he drove down the Outer Banks on Friday.

Irene officially made landfall when the eye of the storm touched Cape Lookout, N.C., around 7:30 a.m. ET, the Hurricane Center says.

At that moment, "the estimated intensity of Irene ... was 85 mph," the center adds. And it cautions that while Irene is expected to weaken slightly in coming hours, it is likely "to remain a hurricane as it moves over the mid-Atlantic states and New England" between now and Monday.

The Hurricane Center just reported that the center of the hurricane has made landfall near Cape Lookout, N.C. 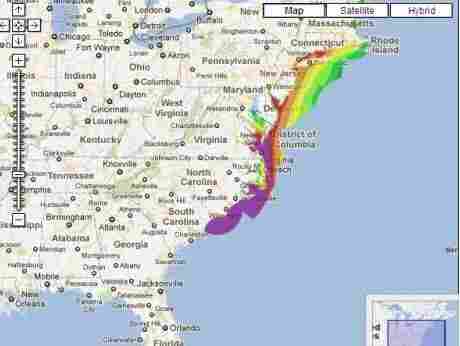 Areas in purple have a high likelihood of a storm surge that exceeds 2 feet. National Hurricane Center hide caption 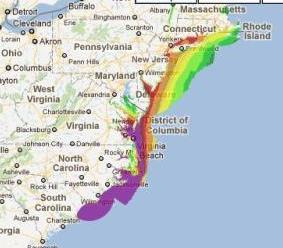 Areas in purple have a high likelihood of a storm surge that exceeds 2 feet.

The Hurricane Center has posted a map showing the areas along the coast where water is most likely to rise 2 or more feet as a "storm surge" occurs. As you'll see, the North Carolina coast is most at risk (the dark purple area has the highest likelihood).

The Weather Channel forecasters say the eye of the hurricane is now only about 10 miles off the coast of North Carolina, near Atlantic Beach. As NPR's Giles Snyder just said on our Newcast, "wind and waves are picking up" as she begins to move ashore.

Meanwhile, here's what the hurricane looks like from space. Astronauts aboard the International Space Station produced this video on Friday: