Accessibility links
Physicists Test For Most Efficient Way To Board A Plane : The Two-Way And they find it's not the way most airlines have been doing it nor the way you would have guessed.

Physicists Test For Most Efficient Way To Board A Plane

Physicists Test For Most Efficient Way To Board A Plane 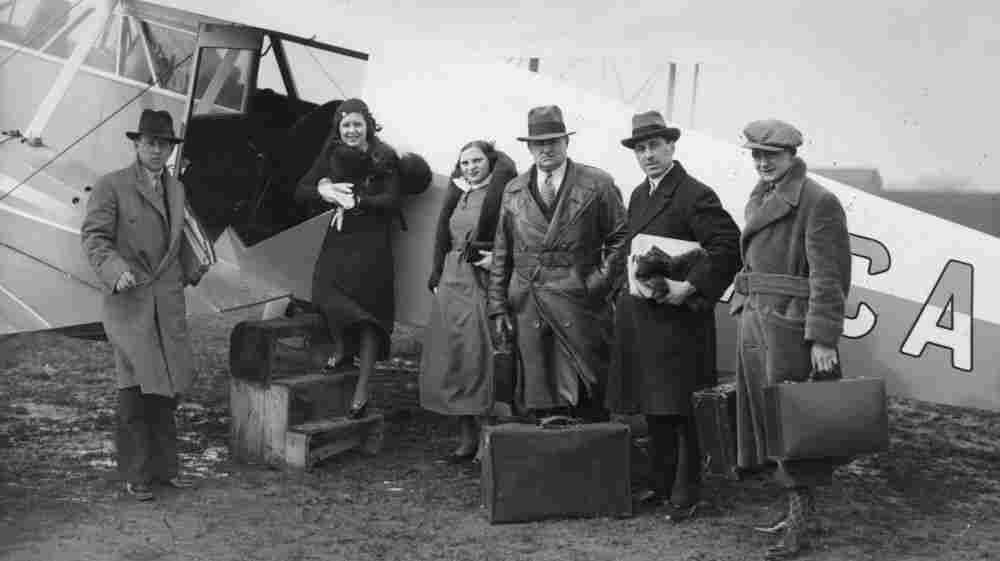 It's an age old question: What's the easiest way to board a plane? In this 1933 picture, passengers wait to board a new passenger service between London and Paris. Davies/Getty Images hide caption

It's obvious. Everyone knows that the way you should board a plane is to start from the back and work your way to the front. Then again, every airline seems to think otherwise, because some do it front to back, others board you by "groups," and others board window seats, then middle seats, then aisle seats.

Well, physicists at the prestigious Fermilab Center for Particle Astrophysics just released a study (pdf) that says we're all wrong. Boarding planes by sequential rows is one of the least effective methods, they found. 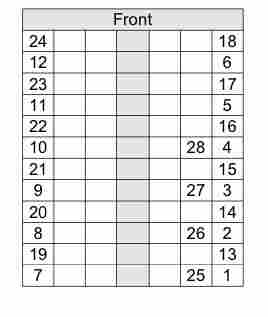 And they found this out by simply testing how long it took 72 "passengers" to board a 12-row mock plane, which is used in movies. The physicists tested five methods: 1) Boarding from back to front in a specified order. 2) A method called Wilma, which means boarding all window seats first, middle seats second and aisle seats third. 3) Boarding in groups or blocks. 4) The random, just get on method. 5) The "Steffen method," which was named after particle astrophysicist Jason H. Steffen, one of the lead writers of the study. Here's how he describes his method:

The Steffen method has the passengers lining up in a prescribed order. This order incorporates in a specific way boarding from the back to the front and from the windows to the aisle. Adjacent passengers in line are sitting two rows apart from each other in corresponding seats (e.g. 12F, 10F, 8F, 6F, 4F, 2F). This method attepts to eliminate seat interferences and, as much as possible, aisle interferences while naturally allowing multiple passengers to stow their luggage simultaneously. The separation between adjacent passengers provides some space for each passenger to manipulate their luggage into the bins.

Discover Magazine reports on the results:

Steffen timed how long it took the passengers to fill the plane under the different boarding procedures and found that the block style takes the longest, falling well behind the uber-sophisticated "random boarding" method—letting everyone on at the same time. The Steffen method was the quickest because it maximized the number of people who could use the aisle concurrently without crashing into each other.

So, Steffen argues, if airline companies started implementing his method, they could save money by shortening the amount of time the planes have spend in the terminal.

Here is a table with the times: 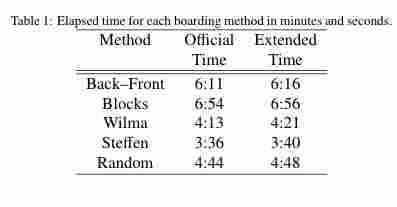 So that just means that before each flight passengers have to figure out exactly which order they're supposed to be standing in. And we all know how well large groups of people take specific instructions.