Accessibility links
Rupert Murdoch Receives $12.5M Bonus; Son James Declines $6M Bonus : The Two-Way James Murdoch said he was not accepting the bonus because of the phone hacking scandal that's rocked the company. He said it was "the right thing to do." 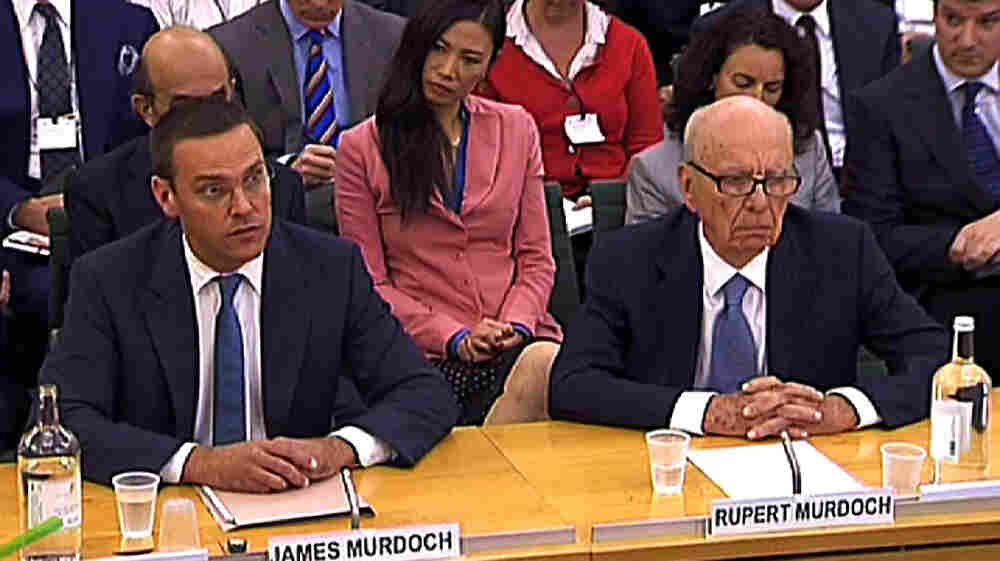 News Corp. Chief Executive Rupert Murdoch (right), testifying alongside his son James, said his appearance before a British parliamentary inquiry in London was "the most humble day of my life." Parbul/AFP/Getty Images hide caption

Rupert Murdoch, the chairman and chief executive of the embattled News Corporation, received a $12.5 million cash bonus for the fiscal year that ended in June.

That may come as a surprise, considering that Murdoch has been at the helm of News Corp. as it tries to weather a phone hacking scandal that has led to the arrest of 13 people and the resignation of two of Murdoch's top executives.

Murdoch's son, James, who is his deputy, turned down a $6 million bonus, which would have been a 74 percent increase from his 2010 take-home pay.

"In light of the current controversy surrounding News of the World, I have declined the bonus that the company chose to award to me," James said in a statement. "While the financial and operating performance metrics on which the bonus decision was based are not associated with this matter, I feel that declining the bonus is the right thing to do."

The Guardian reports on reaction to the bonuses:

Charlotte Harris, the solicitor who represents several phone-hacking claimants, said: "The bonuses are not very humble given recent events."

She was referring to a comment by Rupert Murdoch, who told MPs on the Commons culture, media and sport select committee when he appeared before them in July that it was "the most humble day of my life".