Accessibility links
Where Is Billy? A Giants Fan Goes Missing, And A Team Goes Searching : The Two-Way Billy had been to almost every Giants game in years. He'd become a fixture and an amulet of comfort for the team. Then on July 31, he just stopped showing up. Now the team, missing its friend and its good luck charm, is hoping for some good news. 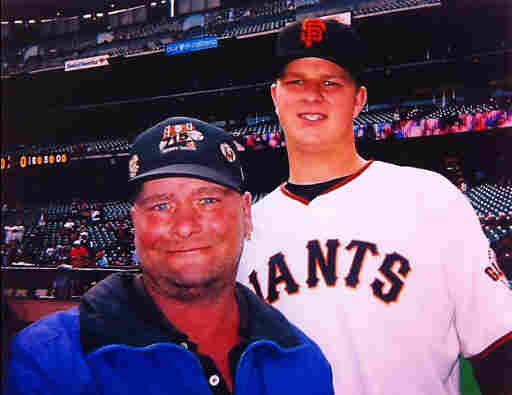 Billy was always outside the San Francisco Giant's ballpark. As the team's manager Bruce Bochy remembers it, on game days, Billy would be there before he arrived and would stay until he came out.

Sometimes that meant waiting until Bochy finished a meeting and emerged at one or two in the morning. Billy was always there — for years — so they became friends, Bochy told All Things Considered host Robert Siegel.

Not friends in the going out to dinner way, said Bochy. But Billy was a comfort. He was the fan who after a tough loss would offer encouragement say we'll get them next time, the fan who always believed the Giants would win the pennant.

But, now, the Giants are worried, because Billy hasn't been outside the clubhouse since July 31.

"It bothers us. We can't find him," said Bochy. "We're worried about him; we're hoping to get some good news. To be honest, I don't know where Billy grew up. I don't know if he went home or we have no idea.

"We are worried about him. It's not like Billy not to be there. I can see him missing a day, which I don't remember him ever missing, but to be gone this long — we're concerned."

The team has posted the only picture they had of Billy in important places around the ballpark. The picture shows Billy with pitcher Matt Cain. Billy looks happy, a cherubic man with blue eyes and a humble smile. The San Francisco Chronicle spoke to Orlando Green, a Giants' security guard who saw Billy living in the parking lot five years ago and for some reason offered him a place to live.

"You hate to see someone living on the street," Green told the Chronicle. "He could get mugged. He could get sick."

Green said he checked the jails, the hospitals and even the morgues, but came up empty.

Green gave the paper some of the only biographical details known about Billy. His last name is Chamberlain and he took medication and lived off disability checks from the government. Green thinks he has family members along the East Coast, but they did not keep in touch with him.

Bochy said the guys on the Giants would also chip in and help Billy get to games in Southern California. Others would leave tickets for him and Bochy remembers that he got him a Giants jacket. Through the seasons, through thick and thin, through the 5th place finish in 2007 and the World Series pennant in 2010, Billy was there.

"Billy became our go to guy when we wanted to feel better about ourselves," said Bochy.

And in a game of superstition, Billy has also become much more. Since Billy disappeared, the Giants went from dominating their division to falling to second place, six games behind the Diamondbacks.

Bochy said the team has talked about that. He said in baseball there are always fans who wait outside clubhouses, fans who grow attached to teams, but Billy was different.

"[Billy] was always by himself," said Bochy. "I didn't know any of his history, really didn't ask him. It was just Billy, our friend, and he was a guy we thought would be there everyday and now we look back and we took it for granted that he'd always be there."

More of Robert's interview with Bruce Bochy is on tonight's All Things Considered. Tune in to your local NPR member station to listen. We'll also post the as-aired interview, here, later today.