Accessibility links
Obama: 'Stop The Political Circus,' Pass Jobs Plan : The Two-Way The president says there is "nothing controversial" in his latest jobs program. It's time, he says, to "actually do something to help the economy." And he's laying out a plan he says has bipartisan appeal. 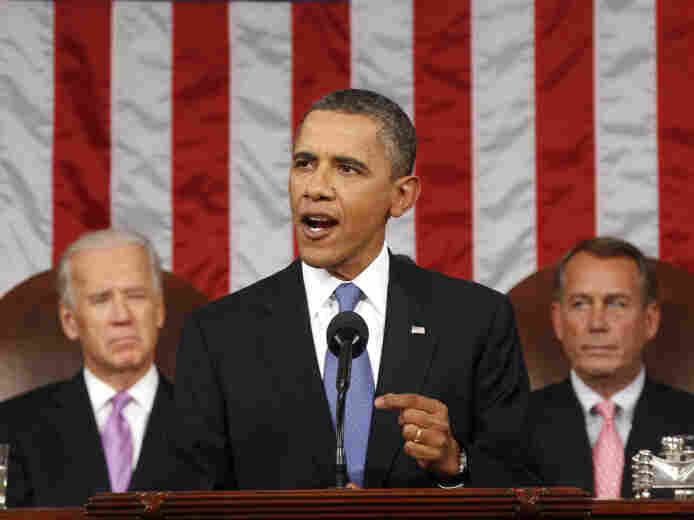 President Obama during his address this evening. Vice President Biden (on the left) and House Speaker John Boehner (R-OH) are behind him. Kevin Lamarque/Getty Images hide caption 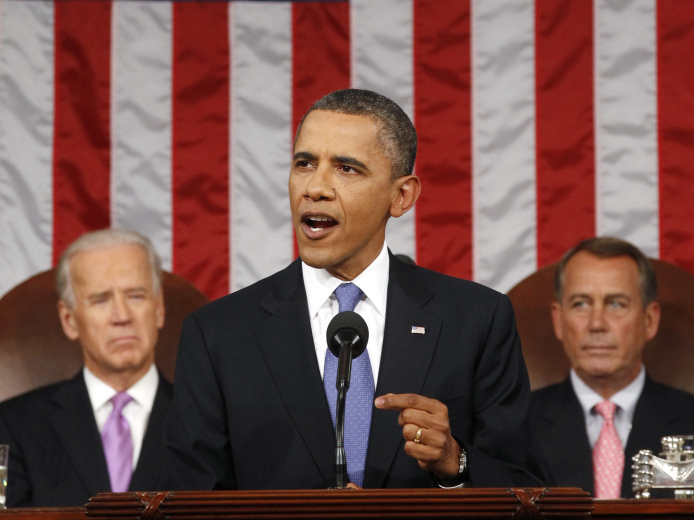 President Obama during his address this evening. Vice President Biden (on the left) and House Speaker John Boehner (R-OH) are behind him.

Saying that it is time to "stop the political circus and actually do something to help the economy," President Obama this evening made a pitch for a $447 billion package of tax cuts, spending on roads and other infrastructure, extended unemployment benefits and aid to states.

He challenged Congress, where Republicans control the House and Obama's fellow Democrats control the Senate, to pass what he said is a package of proposals that both parties have supported in the past.

And the president took his case to the public and said he will continue to do that in coming days and weeks.

"I intend to take that message to every corner of this country," said Obama, as he capped one of the feistier speeches of his presidency.

"I also ask," Obama said, "every American who agrees to lift your voice and tell the people who are gathered here tonight that you want action now. Tell Washington that doing nothing is not an option."

It's the president's latest bid to give the sluggish economy a boost and get jobs growing again. The nation's unemployment rate, now 9.1 percent, has been near or above 9 percent since mid-2009.

We live-blogged as the president addressed a joint session of Congress.

"I also ask every American who agrees to lift your voice and tell the people who are gathered here tonight that you want action now. Tell Washington that doing nothing is not an option. Remind us that if we act as one nation, and one people, we have it within our power to meet this challenge. Regardless of the arguments we've had in the past, regardless of the arguments we'll have
in the future, this plan is the right thing to do right now. You should pass it.

"And I intend to take that message to every corner of this country. I also ask every American who agrees to lift your voice and tell the people who are gathered here tonight that you want action now. Tell Washington that doing nothing is not an option. Remind us that if we act as one nation, and one people, we have it within our power to meet this challenge."

"Maybe some of you have decided that ... differences are so great that we can only resolve them at the ballot box," Obama says. "But know this: the next election is 14months away. And the people who sent us here – the people who hired us to work for them – they don't have the luxury of waiting 14
months. Some of them are living week to week; paycheck to paycheck; even day to day. They need help, and they need it now."

Some may believe, and he's referring to some Republicans, that the best thing to do is "dismantle government," Obama says. But, he continues:

"Ask yourselves – where would we be right now if the people who sat here before us decided not to build our highways and our bridges; our dams and our airports? What would this country be like if we had chosen not to spend money on public high schools, or research universities, or community colleges? Millions of returning heroes, including my grandfather, had the opportunity to go to school because of the GI Bill. Where would we be if they hadn't had that chance?"

"We should have no more regulation than the health, safety, and security of the American people require. Every rule should meet that common sense test,"

"What we can't do – what I won't do – is let this economic crisis be used as an excuse to wipe out the basic protections that Americans have counted on for decades."

"Now it's time to clear the way for a series of trade agreements that would make it easier for American companies to sell their products in Panama, Colombia, and South Korea – while also helping the workers whose jobs have been affected by global competition," Obama says. "If Americans can buy Kias and Hyundais, I want to see folks in South Korea driving Fords and Chevys and Chryslers. I want to see more products sold around the world stamped with three proud words: 'Made in America.' "

After laying out such choices as keeping "tax loopholes for oil companies" vs. giving "small business owners a tax credit when they hire new workers," the president says:

The president gets applause from Republicans as well as some of his fellow Democrats when he says "we have to reform Medicare to strengthen it.

Then he says: "I'm also well aware that there are many Republicans who don't believe we should raise taxes on those who are most fortunate and can best afford it. But here is what every American knows. While most people in this country struggle to make ends meet, a few of the most affluent citizens and corporations enjoy tax breaks and loopholes that nobody else gets."

His "American Jobs Act will not add to the deficit," Obama says. "It will be paid for. And here's how:

As he works through his points, the president uses the phrase "pass this jobs bill" to connect his points — as when he says:

"Pass this jobs bill, and companies will get a $4,000 tax credit if they hire anyone who has spent more than six months looking for a job."

"Pass this jobs bill, and the typical working family will get a $1,500 tax
cut next year."

"Pass this jobs bill" is likely to be heard a lot in coming days and weeks.

Obama says his plan would cut the red tape "that prevents some of
these [infrastructure] projects from getting started as quickly as possible. And we'll set up an independent fund to attract private dollars and issue loans based on two criteria: how badly a construction project is needed and how much good it would do for the economy.

"Pass this jobs bill, and we can put people to work rebuilding America," Obama says. "Everyone here knows that we have badly decaying roads and bridges all over this country. Our highways are clogged with traffic. Our skies are the most congested in the world."

Update at 7:16 p.m. ET. A Direct Appeal To Republicans On Tax Cuts:

"For everyone who speaks so passionately about making life easier for 'job creators,' this plan is for you," Obama says.

"Job creators" is a phrase often used by Republicans when they talk about how raising taxes would hurt businesses — the job creators.

"Pass this jobs bill, and starting tomorrow, small businesses will get a tax cut if they hire new workers or raise workers' wages," Obama says. "Pass this jobs bill, and all small business owners will also see their payroll taxes cut in half next year. If you have 50 employees making an average salary, that's an $80,000 tax cut. And all businesses will be able to continue writing off the investments they make in 2012."

The first words about what's in his program:

"The purpose of the American Jobs Act is simple: to put more people back to work and more money in the pockets of those who are working. It will create more jobs for construction workers, more jobs for teachers, more jobs for veterans, and more jobs for the long-term unemployed. It will provide a tax break for companies who hire new workers, and it will cut payroll taxes in half for every working American and every small business. It will provide a jolt to an economy that has stalled, and give companies confidence that if they invest and hire, there will be customers for their products and services. You should pass this jobs plan right away."

After Obama says that:

"The people of this country work hard to meet their responsibilities. The question tonight is whether we'll meet ours. The question is whether, in the face of an ongoing national crisis, we can stop the political circus and actually do something to help the economy."

He gets his first applause of the speech — not resounding, but applause nonetheless.

"The millions of Americans who are watching right now - they don't care about politics," the president says. "They have real life concerns. Many have spent months looking for work. Others are doing their best just to scrape by – giving up nights out with the family to save on gas or make the mortgage; postponing retirement to send a kid to college."

President Obama is now making his way down the aisle of the House chamber. As usual in these events, he's stopping to greet lawmakers and shake hands with lawmakers.

C-SPAN is following what "journalists who cover Congress" are tweeting. Click here.

Vice President Biden has arrived in the House chamber, as have other top members of the Obama administration.

Republican leaders have chosen not to give any sort of official response to the Democratic president's address this evening. There will be, for sure, many comments from GOP leaders after the president is finished.

Meanwhile, the president has just left the White House and is headed to the Capitol, CBS News' Mark Knoller reports.

Update at 6:30 p.m. ET. Leading GOP Candidates On Jobs And The Economy:

"House Republicans have already lined up their talking points ahead of President Obama's Thursday evening jobs speech," Politico reports, "and they seem to echo the new Republican theme of finding 'common ground' with the president on the economy."

President Obama plans to tell the nation tonight that there is "nothing controversial" in his latest jobs program and he's set to tell Congress that it should be passed "right away."

"The question is whether, in the face of an ongoing national crisis, we can stop the political circus and actually do something to help the economy; whether we can restore some of the fairness and security that has defined this nation since our beginning," Obama will also say, according to excerpts of his address that were just released by the White House.

Meanwhile, The Associated Press just reported that it's been told by officials familiar with the president's plan that the program of tax cuts and other initiatives will total about $450 billion. If that's correct, it's a sharp increase from the $300 billion package that sources were telling the AP and other news outlets about just yesterday.

Obama will say, according to the excerpts, that the plan "will provide a tax break for companies who hire new workers, and it will cut payroll taxes in half for every working American and every small business."

We'll be updating this post before, during and after the president's address to a joint session of Congress, so be sure to hit your "refresh" button. He's due to start at 7 p.m. ET. You can also listen on NPR.org and NPR member stations.