Accessibility links
Cats That Glow For AIDS Research Join List Of Animals That Shine : The Two-Way Dogs, pigs, monkeys, mice and fish are among animals who have glowed for research purposes. The Mayo Clinic is working to transfer an AIDS-fighting protein from Monkeys to cats. It has added a jellyfish gene (for the glow) to help track what happens. 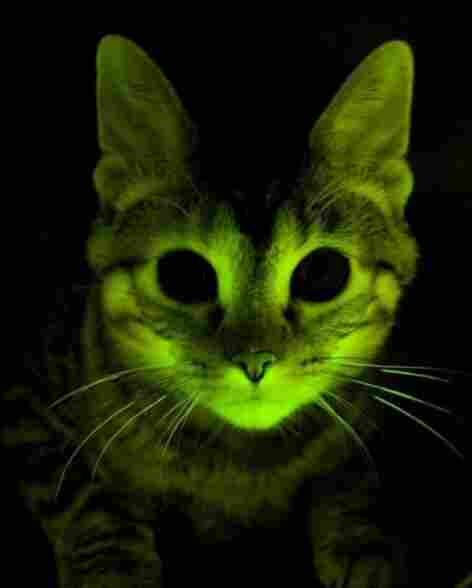 A story that's been getting some attention the past day or so — that AIDS researchers at the Mayo Clinic have inserted genes into cats that make the animals glow green in the dark — sounded familiar.

Haven't researchers been doing this sort of thing for years? We wondered.

"In 1961 researcher Osamu Shimomura of the Marine Biological Laboratory in Massachusetts noticed a molecule in this jellyfish that glowed bright green under ultraviolet light (as pictured). After extracting the molecule from 10,000 specimens, Shimomura found the protein that creates the glow.

"At some point, a light bulb went off. Some of Shimomura's colleagues realized that the protein could be attached to other proteins — enabling scientists to mark proteins of their choice with a green glow."

In 2008, a team of researchers won the Nobel Prize in Chemistry for their "discovery and development of the green fluorescent protein."

Not everyone is in favor of such research. As Sky News reports, "a veterinary advisor for the British Union for the Abolition of Vivisection (BUAV) said they had ethical concerns about the research. 'This type of research on cats serves only to continue our reliance on scientifically flawed animal-based research," he said. 'Science should instead be progressing in the area of modern, non-animal alternatives.' "

Mayo molecular biologist Eric Poeschla, though, says the clinic's current research could "help cats as much as people."

Basically, the Mayo researchers are injecting key AIDS infection-fighting proteins from monkeys into feline eggs along with a jellyfish gene (the glowing part of all this). That glow gene helps them track whether the transfer has occurred.

Mayo says that "this specific transgenesis (genome modification) approach will not be used directly for treating people with HIV or cats with FIV, but it will help medical and veterinary researchers understand how restriction factors can be used to advance gene therapy for AIDS caused by either virus."