Accessibility links
Miami Battling Invasion Of Giant African Snails : The Two-Way They are one of the most damaging land snails in the world, and could devastate agricultural areas. So far, about 1,000 have been found in just one square mile. It cost $1 million to remove a previous invasion. 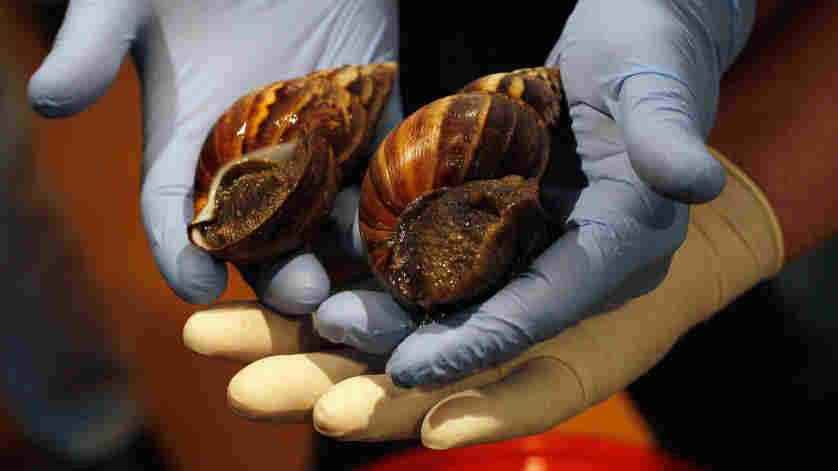 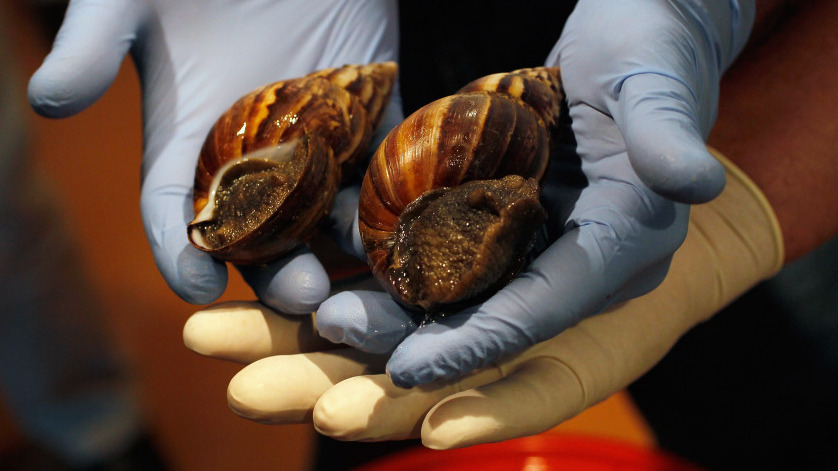 The invaders: Two Giant African Snails, in the hands of Florida Department of Agriculture and Consumer Services staffers on Thursday (Sept. 15, 2011).

Giant African Snails, "one of the most damaging land snails in the world," have invaded a southwest Miami subdivision and are now the focus of "a time-consuming expensive counter-attack" by authorities, the Miami Herald reports.

The creatures "can grow up to 10 inches long and four inches wide ... eat at least 500 different types of plants, lay about 1,200 eggs a year, and can carry a strain of non-fatal meningitis," the Herald writes. About 1,000 have been found in just the past week or so.

The first few may have been smuggled into the country by a man who "practiced the traditional African religion Ifa Orisha, and authorities said he persuaded his followers to drink the snails' juices as part of a healing ritual," says the newspaper. "Several practitioners became violently ill."

According to the Herald: "In 1966, a boy visiting Hawaii brought back three to Miami and his grandmother released them into her garden. Soon, there were at least 18,000 slithering about. It took authorities a decade and $1 million to remove those snails."

The Florida Department of Agriculture and Consumer Services advises that:

"Anyone who believes they may have seen a Giant African land snail or signs of its presence should call the Department of Agriculture and Consumer Services toll-free at 888-397-1517 to make arrangements to have the snail collected.

"To preserve the snail sample, Floridians should use gloves to put the snail in a zip lock bag, seal it and place it in a bucket or plastic container. They are advised not to release or give these samples away."