On 'Tell Me More': Discussing the 'Increase Diversity Bake Sale' 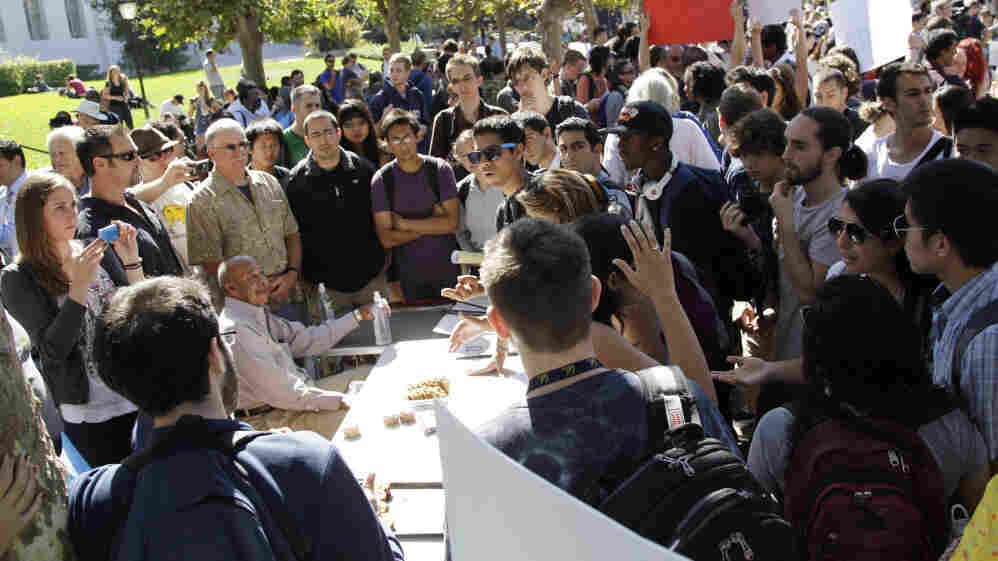 At the bake sale on Tuesday. Protesters to the right. Young Republicans and their supporters to the left. Ben Margot/AP hide caption 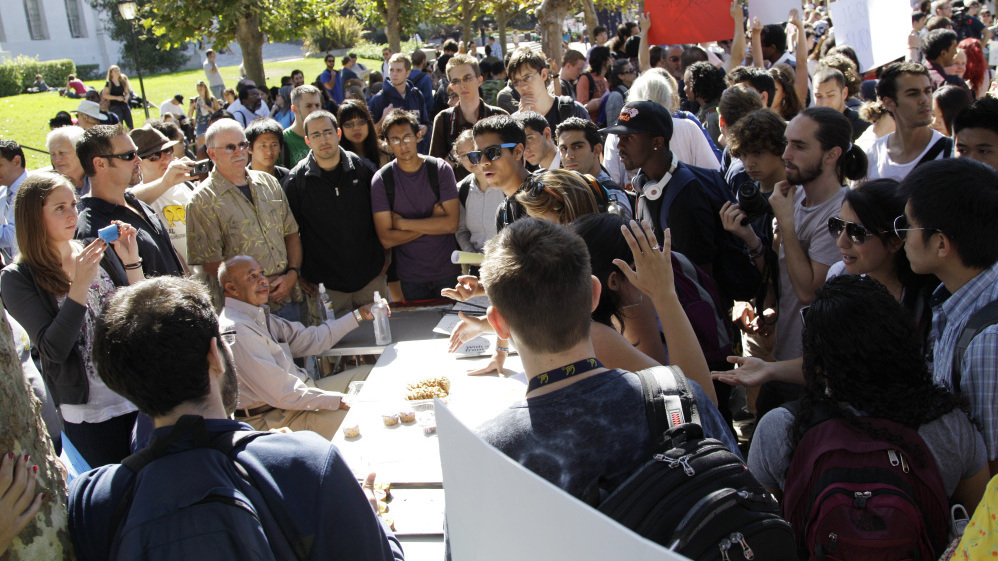 At the bake sale on Tuesday. Protesters to the right. Young Republicans and their supporters to the left.

The controversial "Increase Diversity Bake Sale" sponsored by young Republicans at the University of California, Berkeley, brought a large crowd of students and others to the school's Sproul Plaza on Tuesday, and the student-run Daily Californian says the climax was a counter-demonstration "that saw hundreds of protesters lie on their backs."

As we wrote Monday, the event's sponsors sparked much debate when they decided to protest affirmative action legislation that would allow California universities to consider race, gender, ethnicity and national origin during admissions by holding a bake sale and basing their prices on the race of their customers.

White students would be charged $2, Asians would pay $1.50, Latinos would pay $1, African-Americans would pay 75 cents, Native Americans would pay 25 cents and women would get 25-cent discounts. That plan was changed at the actual event — while the young Republicans continued to make their case against affirmative action, they decided to let customers set their own prices. They "sold out of cupcakes and cookies," the Daily Californian says.

The young Republicans were joined by Ward Connerly, the San Francisco Chronicle reports, "a multiracial Republican who wrote Proposition 209, the state's voter-approved ban on race preferences in government programs." Campus police tell the Daily Californian there were no incidents, just a lot of intense debate.

Later today on NPR's Tell Me More, guest host Jacki Lyden is due to talk with Shawn Lewis, president of the Berkeley College Republicans, and Vishalli Loomba, student body president at the university. Loomba has been on the record in opposition to what the young Republicans did. We'll update this post later with some of their conversation.

On 'Tell Me More': Discussing the 'Increase Diversity Bake Sale'

During the conversation with Jacki, Lewis of the young Republicans said that the message of the bake sale was that "treating people differently or discriminatorily based on race or color of their skin is inherently wrong. So we really wanted to create [an] emotional response and dialogue because of that pricing structure and I think we did accomplish that."

He also said the young Republicans raised about $800, which will go to charity.

Loomba said that the event, however, made many students "feel uncomfortable and unwanted."

"There are many more constructive methods" to raise issues related to race, she said, "that aren't so offensive and don't upset the campus environment and campus community."

Click here to find a station that broadcasts or streams Tell Me More.