Accessibility links
Mullen Reasserts Pakistan's Links To Extremists : The Two-Way The outgoing chairman of the Joint Chiefs of Staff said he was compelled to talk publicly about the link between Pakistan and the Haqqani Network because he's losing American soldiers as a result of it. "I think it's got to be addressed," he said. 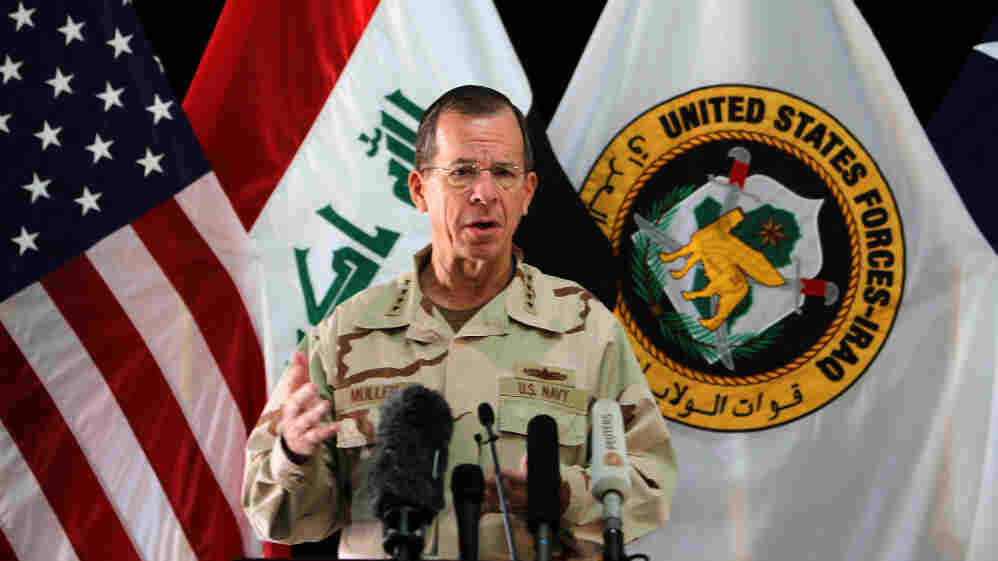 U.S. Chairman of Joint Chiefs of Staff Admiral Michael Mullen speaks during a press conference in Baghdad on Aug. 2, during a visit to press top Iraqi officials to make a decision on the future of the U.S. troop presence in Iraq. Ali Al-Saadi ALI /AFP/Getty Images hide caption

In an interview with Morning Edition's Steve Inskeep, the outgoing chairman of the Joint Chiefs of Staff said he would not change "a word" of the testimony he gave the Senate Armed Services Committee last week.

"I phrased it the way I wanted it to be phrased," Adm. Mike Mullen said.

Mullen unleashed a diplomatic firestorm between the United States and Pakistan when he said that an anti-American extremist organization in Afghanistan is a "veritable arm" of Pakistan's spy agency. As we reported today some U.S. officials pushed back, saying Mullen's assertion was "overstated."

But Mullen stood firmly by what he said, adding that he decided to talk about Pakistan's "linkage" with the Haqqani Network after the orgnazition was found to be responsible for the June 28 attack against the Inter-Continental Hotel in Kabul, the Sept. 10 truck bomb that killed five Afghans and the Sept. 13 attack against the U.S. Embassy in Kabul. That, he said, plus what he called a "strategic linkage" with the ISI and "general support" from the Pakistani government compelled him to talk about it publicly.

"It is that linkage that I felt for a long time has to be broken," he said. "I'm not asserting that the Pak mil or the ISI has complete control over the Haqqanis. But the Haqqanis run that safe haven. They're also a home to al-Qaida in that safe haven. And I am losing American soldiers. The Haqqanis are killing American soldiers. And from that perspective, I think it's got to be addressed, which is the reason I spoke to it."

The Pakistani government has vehemently denied those claims. In an interview with Steve on Tuesday, Pakistan's Foreign Minister Hina Rabbani Khar said having "links" to those networks doesn't mean Pakistan is involved in an attack.

"I can assure you that your intelligence agency would have links with the same people, maybe," she said.

"And you spoke earlier, Steve, about what Foreign Minister Khar said, which is, certainly contacts are understood," he told Steve. "But this is more than contacts."

"I've talked about them supporting it," he said. "When [Gen. Ashfaq Pervez Kayani, Pakistan's top military official] and I have talked about this in the past, he's not a big fan of the Haqqani Network. It's a very lethal, very virulent insurgent terrorist group that you just can't – you just can't walk up to and eliminate. So it isn't anything that could be done anywhere close to overnight. We talked about how to do it in the past, and that's really up – from my perspective, that's really up to the Pakistanis to figure out."

Mullen and Khar do agree on one thing: Though the relationship between Pakistan and United States is frayed, it must be maintained, they both said.

Mullen acknowledged that Pakistanis have a "huge trust deficit" with the United States and that it's a "difficult relationship," but, he said, the two countries have worked through tough times before.

"I'm just one that believes we need to continue to work on it and, if we don't, the longer-term dangers of not having a relationship and not trying to close this gap far outweigh what we're going through right now," he said.

Mullen's last day is Friday, so Steve also asked him about a few other topics. Among the highlights:

-- On the repeal of the don't ask don't tell policy:

"I felt it was an integrity issue. I felt it was an issue that was driven, you know, inside an organization that values integrity, which has been bedrock to me since I was a midshipman in the '60s, and I could never reconcile the fact that integrity is one of our values and yet I would ask thousands to show up to work every day and in some cases die for their country and then have to lie about who they were.

"So it wasn't – for me, it wasn't overly complex – a very difficult issue, I understand that, about an issue that, one, I think now is behind us and, two, is a very positive change in terms of – in terms of our people."

-- On the upcoming cuts to the budget, Mullen addressed what could happen to the military if the super committee does not come to an agreement and the government is forced to cut spending across the board:

ADM. MULLEN: The supercommitee – yeah, does not do what it's supposed to do and a sequester goes into effect, the way that gets executed, it affects almost every single account. So it — from my point of view — it has a very, very strong chance of breaking us. And in the world we're living in right now, I think that would really be dangerous.

MR. INSKEEP: Breaking you – what does that mean?

ADM. MULLEN: It means eroding training and readiness. It means not being able to modernize it, because of the way it hits every single account. So it will break programs and it has great potential to dramatically hollow out the force and do it very, very rapidly. So I'm arguing for – certainly we're tasked right now with finding over $450 billion in savings over the next 10 years. I think we can do that. There's risk associated with that. It's very hard but it's manageable. I think if we double that, we'd be in trouble.

Much more of Steve's interview with Adm. Mullen will air on Morning Edition Thursday and Friday. Tune into to your local member station to listen. We'll post audio of the as-aired interview on this page on Thursday. We've also posted a full transcript of the interview.