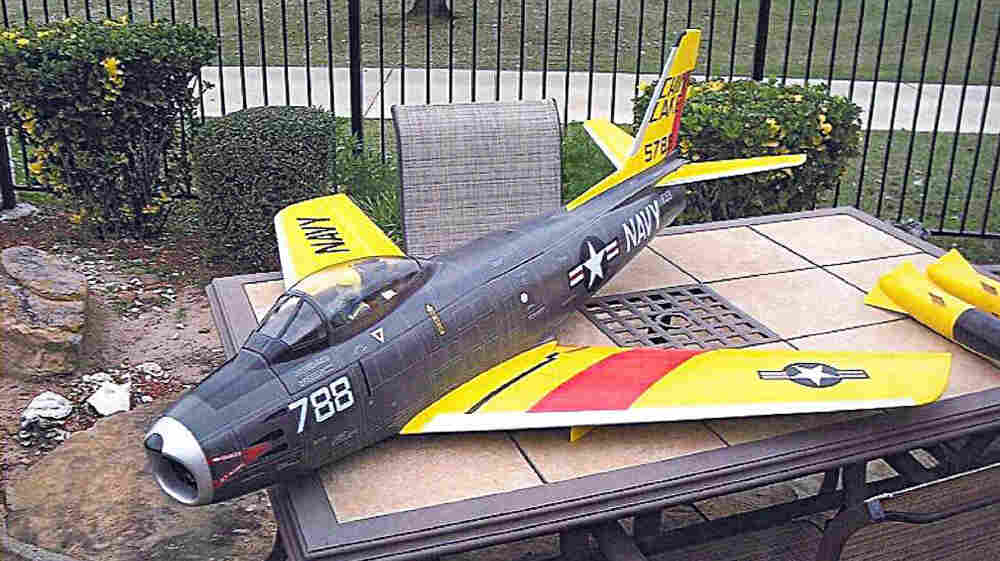 According to the United States Attorney's Office, District of Massachusetts, this is the remote controlled model of a US Navy's 1950s Sabre jet fighter that allegedly belonged to Rezwan Ferdaus. AFP/Getty Images hide caption 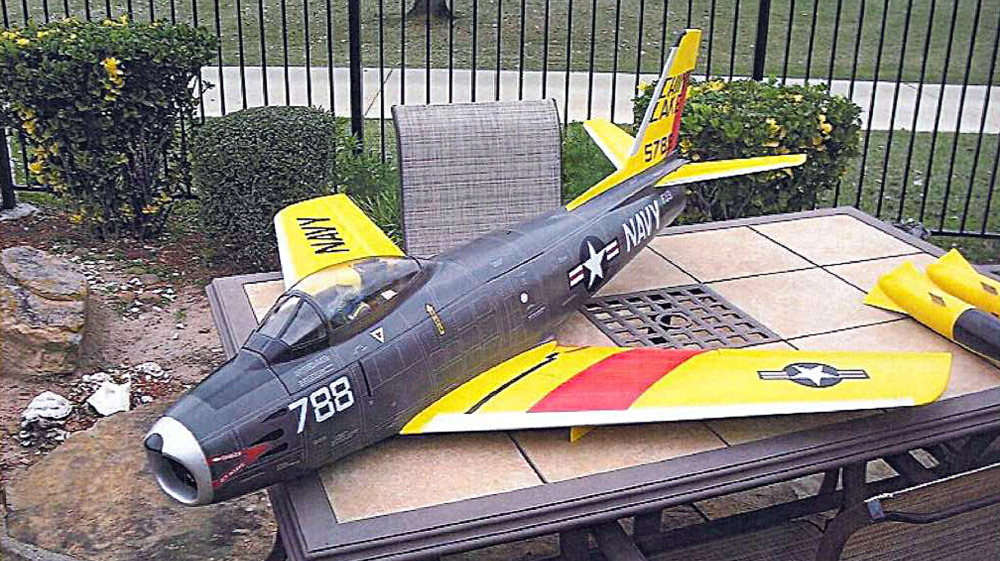 According to the United States Attorney's Office, District of Massachusetts, this is the remote controlled model of a US Navy's 1950s Sabre jet fighter that allegedly belonged to Rezwan Ferdaus.

More details are emerging about the alleged plot and the alleged would-be terrorist who the FBI says planned to attack the Pentagon and Capitol Building with explosives-laden small aircraft and thought he had given devices to al-Qaida operatives that could be used to kill U.S. soldiers stationed overseas.

Those details include the weapons and other materials that the FBI says 26-year-old Rezwan Ferdaus of Ashland, Mass., acquired (with undercover operatives' assistance).

From the affidavit filed by the FBI Wednesday:

-- Ferdaus told undercover FBI investigators he wanted to "decapitate" the nation's "military center" and "severely disrupt ... the head and heart of the snake."

-- He said "he realized more than a year ago from viewing jihadi websites and videos 'how evil' America is and that jihad is the solution."

-- "Ferdaus has designed, built, and supplied more than 7 mobile phones, each of which Ferdaus had modified to act as an electrical switch for an improvised explosive device, to FBI undercover employees, who Ferdaus believed were members of, and recruiters for, al Qaeda, to purportedly be used to kill American soldiers stationed overseas."

According to the FBI, because Ferdaus was unknowingly dealing with undercover FBI personnel, "the public was never in danger from the explosive devices. ... The defendant was closely monitored as his alleged plot developed and the [undercover operatives] were in frequent contact with him."

A physics graduate of Northeastern University, Ferdaus is a U.S. citizen who was living in the basement of the home his family had moved into about 14 years ago, according to CBS Boston. There's no word yet on where his family had lived before that.

He has been charged with plotting to "damage or destroy the Pentagon and U.S. Capitol" and with "attempting to provide material support and resources to a foreign terrorist organization, specifically to al Qaeda, in order to carry out attacks on U.S. soldiers stationed overseas," the FBI says.

As for whether the small aircraft Ferdaus allegedly acquired is capable of delivering a lethal payload, CNN reports that:

"The threat from remote-controlled aircraft needs to be put in some perspective. Even 20 pounds of high explosive might not inflict devastating structural damage on a building — especially if it were reinforced like the Pentagon. By comparison, the devastating 1995 Oklahoma City bomb involved 2.5 tons of explosive packed into the back of a truck — although much of that was a more basic form of ammonium nitrate and fuel oil.

"Even so, the force of a few pounds of C4 in a confined and crowded space such as a sports stadium or outdoor concert venue could produce mass casualties."

The FBI affidavit says that using a public library's computers, "Ferdaus located a number of websites that sold remote controlledplanes and learned that such planes could carry approximately 38 to 42 pounds." It adds that he allegedly planned to get three small planes and put 5 pounds of explosive on each. Ferdaus wanted to put 9 pounds of explosives on "bridges surrounding the Pentagon," the affidavit alleges.

Note: NPR follows Associated Press style on the spelling of al-Qaida. Other organizations do not.