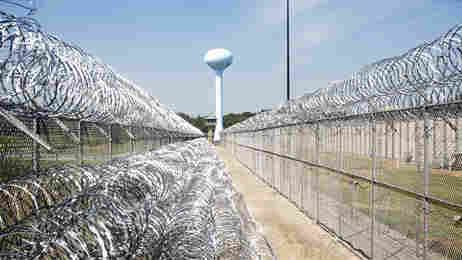 Marion Prison in Illinois, where one of the CMUs is located. Steve Jahnke/The Southern/AP hide caption

Five men convicted in a recent wave of high-profile domestic terrorism cases are now in special communications management units (CMUs) in the American Midwest, where their conversations are monitored 24 hours a day by counterterrorism analysts at the U.S Bureau of Prisons in West Virginia.

-- Zachary Adam Chesser, who pleaded guilty to charges including making threats to the creators of the popular animated series South Park.

-- Michael Finton, who was radicalized in prison and went on to try to bomb a courthouse in Springfield, Ill.

-- Hosam Maher Smadi, who attempted to use weapons of mass destruction against a Dallas skyscraper in 2009.

-- Farooque Ahmed, who pleaded guilty last year to charges that he was helping in a plot to bomb subway stations in Virginia

Another recent arrival at the CMUs, which are the focus of ongoing civil liberties lawsuits in Washington D.C. and Indiana, is Harold Charles "Hal" Turner, an Internet shock jock convicted of threatening federal judges. Turner recently defended himself on related charges and won an acquittal from a Connecticut jury.

NPR closely examined the prison units, referred to by some as "Guantanamo North" for the high percentage of inmates convicted of terrorism-related charges, in a two-part series last March, for the first time interviewing former prisoners in depth and cataloging 96 of the men who have lived there.

Several other news organizations have followed up with coverage over the prison controversy, including The Nation, New York Magazine and the BBC .

The units, which can hold a total of 100 inmates, intermingle such prisoners as Mohammed Rashed, convicted in the Pan Am flight 830 bombing, with Bernie Lazar Hoffman, a former Christian evangelist found guilty of child sexual exploitation. One of the most famous inmates is John Walker Lindh, accused of joining forces with the Taliban and captured in Afghanistan in 2001. Lindh is one of several prisoners suing to try to win the right to communal prayer in the CMUs, which now ban group prayer for Muslim inmates.

Prison officials say the communications management units are designed for people who require less security than the most dangerous inmates, typically housed in so-called Supermax facilities. And lawyers for inmates report that at least five prisoners who spent time at the Supermax in Florence, Colo., are now in CMUs as part of a program to dial back security for prisoners serving decades-long sentences.