Accessibility links
Ron Paul Condemns Al-Awlaki's Killing : The Two-Way The Republican presidential candidate said the action amounted to the assassination of an American citizen "without charges." "We should think very seriously about this," he said. 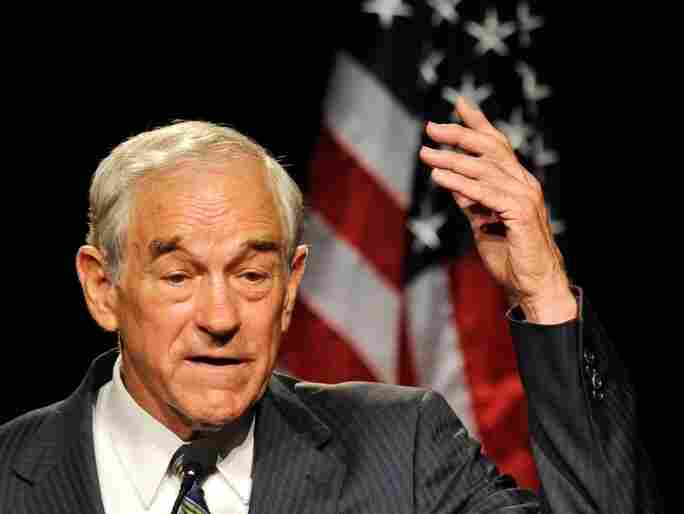 GOP presidential candidate Ron Paul had some tough words for President Obama over what he said was the assassination of Anwar al-Awlaki.

"I don't think that's a good way to deal with our problems," Paul told reporters. "Al-Awlaki was born here; he is an American citizen. He was never tried or charged for any crimes. No one knows if he killed anybody. We know he might have been associated with the underwear bomber. But if the American people accept this blindly and casually that we now have an accepted practice of the president assassinating people who he thinks are bad guys, I think it's sad.

"I think what would people have said about Timothy McVeigh? We didn't assassinate him, who we were pretty certain that he had done it. Went and put through the courts then executed him. To start assassinating American citizens without charges, we should think very seriously about this."

Paul, a Republican from Texas who is considered a libertarian, has also leveled criticism over the raid that killed Osama bin Laden in Pakistan. Paul, however, said the president could order the assassination of bin Laden, because Congress passed a resolution authorizing the president to go after individuals involved with the Sept. 11 attacks.

No one has ever claimed al-Awlaki was associated with Sept. 11, he said adding that the government has never been clear what his crimes were.

This question has been batting around since the United States approved his killing, last year. As The New York Times reported at the time, the killing of an American citizen is "extremely rare, if not unprecedented."

The Times also explained the administration's rationale as far as the legality of the killing:

As a general principle, international law permits the use of lethal force against individuals and groups that pose an imminent threat to a country, and officials said that was the standard used in adding names to the list of targets. In addition, Congress approved the use of military force against Al Qaeda after the Sept. 11, 2001, terrorist attacks. People on the target list are considered to be military enemies of the United States and therefore not subject to the ban on political assassination first approved by President Gerald R. Ford.

Both the C.I.A. and the military maintain lists of terrorists linked to Al Qaeda and its affiliates who are approved for capture or killing, former officials said. But because Mr. Awlaki is an American, his inclusion on those lists had to be approved by the National Security Council, the officials said.

Back in August of 2010, Al-Awlaki's father, Nasser, along with the American Civil Liberties Union filed a suit against the Obama administration that challenged Al-Awlaki's placement on the U.S. terrorist hitlist.

This ABC News story from the time explains one complication in the case was that after al-Awlaki was placed on the Treasury Department's Office of Foreign Asset Control's terrorist list it becomes illegal for anyone to represent them legally.

The government also asked a federal judge to dismiss the lawsuit because the "case would reveal state secrets," as The Washington Post reported at the time.

In December the case was dismissed. U.S. District Judge John Bates decided there were issues with whether Awlaki's father could bring the suit before the court. The Christian Science Monitor reported Bates ruled mostly on something called the "political question doctrine, which requires judges to step aside in issues that are best resolved by the elected, political branches of government."

Here's a bit from the judge's decision:

"The court recognizes the somewhat unsettling nature of its conclusion – that there are circumstances in which the Executive's unilateral decision to kill a US citizen overseas is constitutionally committed to the political branches and judicially unreviewable," Bates wrote in his 83-page decision. "But this case squarely presents such a circumstance."

He added that the political question doctrine "does not contain any 'carve-out' cases involving the constitutional rights of US citizens."