Accessibility links
Amanda Knox Wins Appeal; Murder Conviction Overturned : The Two-Way An Italian panel has granted Amanda Knox's appeal of her murder conviction, for which the American had been serving a 26-year prison sentence. Knox, who came to Perugia, Italy, as an exchange student, had been found guilty in the November 2007 murder of British student Meredith Kercher. 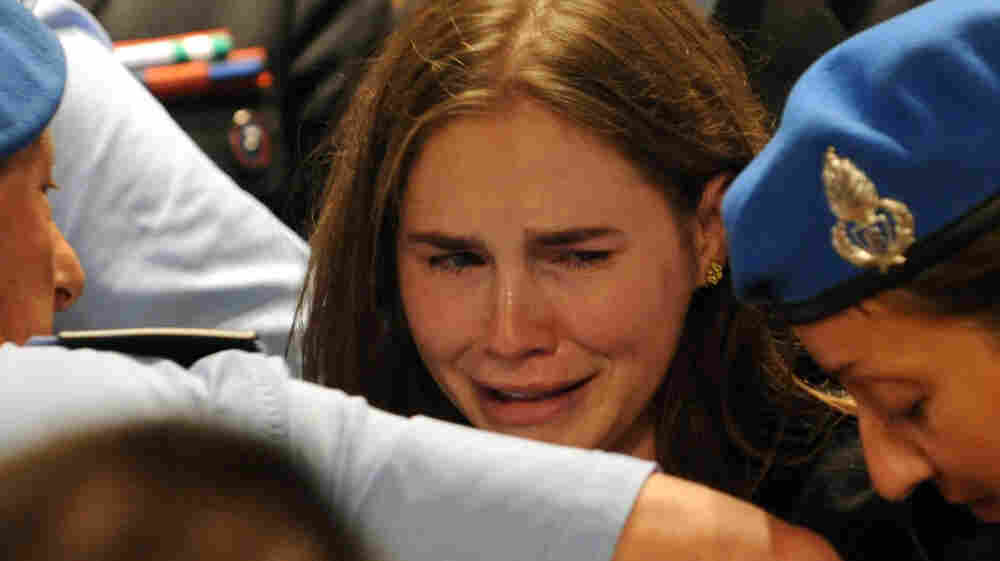 Amanda Knox weeps in an Italian appeals court as her murder verdict is overturned. In 2009, Knox was found guilty of charges stemming from the stabbing death of fellow student Meredith Kercher in Perugia, Italy. 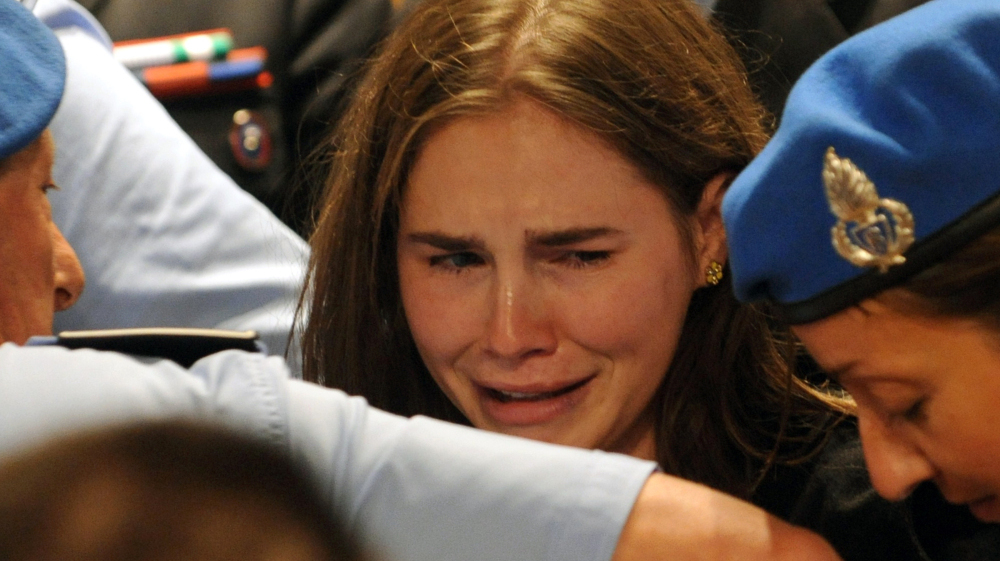 Amanda Knox weeps in an Italian appeals court as her murder verdict is overturned. In 2009, Knox was found guilty of charges stemming from the stabbing death of fellow student Meredith Kercher in Perugia, Italy.

Amanda Knox has won her freedom after appealing her murder conviction, for which the American had been serving a 26-year prison sentence. In 2009, Knox, who came to Perugia, Italy, as an exchange student, was found guilty in the November 2007 murder of British student Meredith Kercher.

But the appeals court cleared Knox of the murder Monday evening, reportedly deciding that she was guilty only of "defamation" in the case. That charge was the first result the judge read aloud in court, drawing a stunned look from Knox, according to Bill Neely of ITV. The judge then continued to announce the findings on charges of murder and related crimes, of which Knox has now been found innocent, along with her co-defendant, Italian Raphaele Sollecito, her former boyfriend.

Tweeting from the courtroom, CNN's Geoff Hill wrote, "Amanda #Knox is free - some of the crowd outside court are cheering."

Earlier, Hill tweeted that Knox could be seen "fighting back tears" as she sat in court waiting for the judges and jury to return and deliver their verdict.

Update at 6:18 p.m. ET: Knox has left prison and will reportedly leave Italy Tuesday. The family of Meredith Kercher has scheduled a news conference for the same day.

Update at 5:15 p.m. ET: Details about the defamation verdict have emerged. Knox has been ordered to pay bartender Diya "Patrick" Lumumba 22,000 euros ($29,218) for accusing him of the murder.

Knox must reportedly renew her passport before she can return to her family's home in Seattle, Wash.

Italian prosecutors have not yet said if they plan to appeal the ruling that freed Knox and Sollecito. If they move forward, that case would go to Italy's highest court.

Update at 4:15 p.m. ET: Crowds outside the Perugia courtroom greeted the overturned verdict by chanting "Vergogna, vergogna!" — or "shame, shame!" according to Italian newspaper Corriere della Sera. And according to CNN's Hill, they also chased Sollecito's lawyer. ITV's Neely says that Knox will now return to prison to collect her personal effects before being released. Our original post continues:

Knox addressed the court in Italian earlier Monday, making an emotional speech in which she said simply, "I did not kill. I did not rape. I did not steal. I wasn't there." Those are the crimes prosecutors say Knox committed nearly four years ago, aided by Sollecito.

The pair were arrested days after Kercher's murder; nearly two years later, they were found guilty and sentenced to prison.

"I just want to go home, go back to my life," Knox, 24, told two judges and a six-member jury in the appeals court Monday. At times during her speech, she broke down into tears as she insisted on her innocence, described her friendship with Kercher, and said that she had been betrayed by the police.

"Meredith was killed, and I have always wanted justice for her," Knox told the court. "I'm not fleeing from truth, and I have never fleed from it. I want the truth."

Knox's case became a sensation in Italy and Britain, as prosecutors painted a picture of a sex game gone violently wrong. Kercher was stabbed to death in her bedroom, in the apartment she shared with Knox. Knox has maintained that she spent the night elsewhere, with Sollecito.

But another suspect in the case, Ivorian man Rudy Hermann Guede, testified that he heard Knox and Kercher arguing that night. And in late 2009, Knox and Sollecito were convicted of murder. Guede was also convicted in the case.

Sollecito spoke to the court earlier Monday, insisting that he and Knox are both innocent.

Meredith Kercher's sister, brother and mother also spoke in Perugia Monday. They told reporters that they had faith in the court process, and that it was important for all the facts to come out. And mostly, they said, they were there to represent Meredith. Here's some of what Stephanie Kercher said:

I think that everyone needs to remember... the brutality of what actually happened that night and everything Meredith must have felt, everything she went through. The fear, the terror and not knowing why. And she didn't deserve it that. Nobody deserved that.