Accessibility links
Relief Pitcher Admits Living A Lie : The Two-Way A week before baseball's regular season ended, Florida Marlins pitcher Leo Nunez made a stunning admission: For the past 10 years, he lied about both his age and his name. Details about why he assumed someone else's identity are only now coming out. 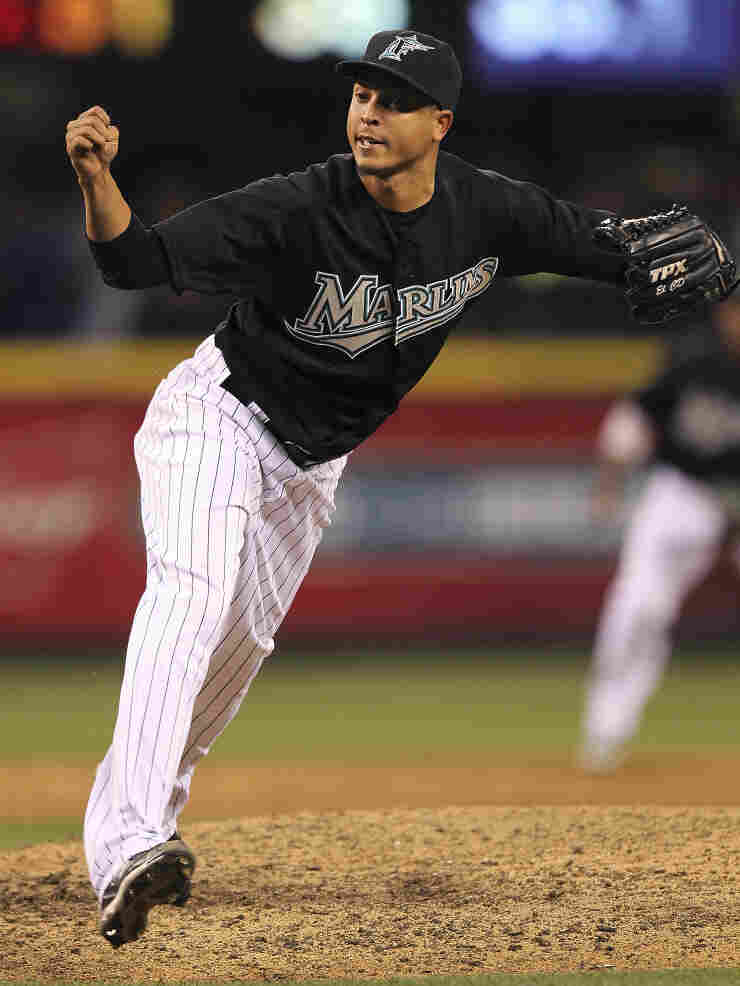 Juan Carlos Oviedo, seen here closing a game for the Marlins under the name Leo Nunez, remains in the Dominican Republic after admitting falsifying documents. 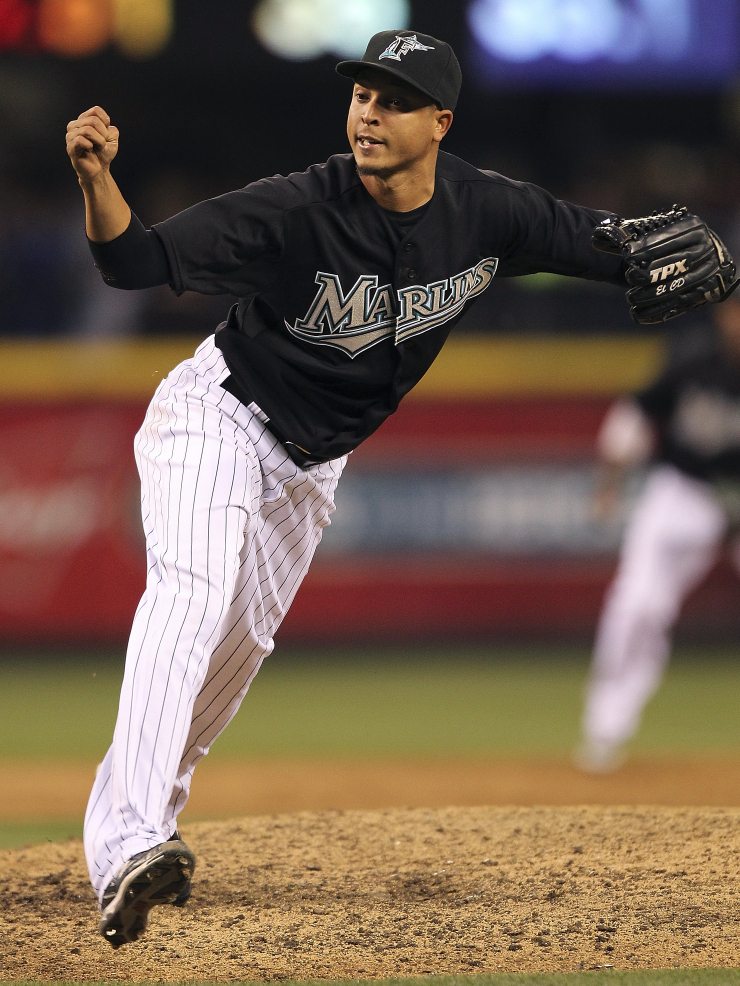 Juan Carlos Oviedo, seen here closing a game for the Marlins under the name Leo Nunez, remains in the Dominican Republic after admitting falsifying documents.

One week before pro baseball's regular season ended, Florida Marlins pitcher Leo Nunez made a stunning admission: For the past 10 years, he lied about both his age and his name. As the subterfuge finally came apart, Nunez left for his native Dominican Republic. Details about why he assumed someone else's identity are only now coming out.

"His real name is Juan Carlos Oviedo," Miami Herald reporter Frances Robles tells NPR's Lynn Neary. "And when he was 17, he assumed a friend's identity, who was 16 — because the teams pay so much more money for 16-year-olds."

Robles visited Oviedo's Dominican hometown of Bonao, where she talked to a coach who runs a "baseball school" that nurtures young players, many of them both talented and desperate to help their families. There, Oviedo was reportedly known almost exclusively by his nickname, "C.D."

That nickname seems to have made it particularly easy for Oviedo to take the name of a younger friend named Leo Nunez. In 2000, he signed a contract with the Pittsburgh Pirates, who believed he was 16.

As for the real Leo Nunez, Robles reports that he still lives in Bonao, where he works in a duty-free zone. But he would not speak with Robles for her article.

Instead, he spoke with local journalist Fabian. Robles writes:

"That business that's going around that the real Leo got money isn't true," Fabián said. "He never got any money, nothing, never. In this country, people would just do that for a friend."

In a country where most people are poor and baseball is among the few paths to riches, he said, everyone wanted Oviedo to succeed.

Robles says that Oviedo himself brought down the ruse, by contacting the Dominican consulate in Florida and telling them his real name, saying that he wanted to "straighten out my paperwork." He then signed a statement acknowledging that he had falsified his identity.

As for why Oviedo decided to come clean, Robles says there are two competing stories out there. One version supposes that he's trying to fulfill a final request from his father, who died last spring. In a similar scenario, this one popular in his hometown, he revealed his real identity so that he could become a naturalized U.S. citizen and bring his family to America.

For now, Oviedo remains in the Dominican Republic; the Marlins have placed him on the "restricted list," used to denote players who are obligated to a team but unavailable to play. That status means that he cannot play for any team but the Marlins — and it can be revised if he resolves his legal issues, allowing him to return to active duty with the team.

Robles says Oviedo would likely have to serve at least a one-year suspension, and forfeit the $6 million salary that would come with it, under his current contract.

In reporting her story for the Herald, Robles was unable to speak with Oviedo. But she spoke with his mother-in-law, Miguelina, who told her, "He'll play baseball again: it's not like he killed anybody... He seems very calm to me. He does not seem worried at all."

As Robles tells Lynn on Morning Edition, the problem of assumed identities doesn't end with Oviedo, noting that 319 players from the Dominican Republic signed new contracts in 2011 — for a combined total of $42 million in signing bonuses.

"As long as there's that many players with that much money, this fraud is going to continue," she says.

And even now, she says, Major League Baseball has found that "a full third of the prospects who are coming in are found to be with fraudulent documents."