Accessibility links
Chemistry Nobel Goes To Scientist Who Discovered Quasicrystals : The Two-Way Israeli scientist Daniel Shechtman's work "forced scientists to reconsider their conception of the very nature of matter," the Royal Swedish Academy of Sciences says. His discovery was a rare "eureka moment."

Israeli scientist Daniel Shechtman has been awarded the 2011 Nobel Prize in chemistry for his 1982 discovery of quasicrystals, the Royal Swedish Academy of Sciences announced this morning. 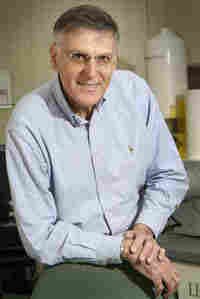 Quasicrystals — atoms "packed in a pattern that could not be repeated" — were thought to be impossible, the academy says. And Shechtman "had to fight a fierce battle against established science" to get his discovery taken seriously. He was even asked to leave his research group at one point.

But, says the academy, "his battle eventually forced scientists to reconsider their conception of the very nature of matter."

On Morning Edition, NPR's Joe Palca said Shechtman's discovery was a rare "eureka moment" when something totally unexpected was discovered. And quasicrystals have proved to have practical uses, Joe said. Because they're very hard, they've been used in surgical instruments and other sharp blades. And because they're poor conductors of heat, they've been used in insulators.

Since Shechtman's discovery, "quasicrystals have been synthesized in laboratories around the world," NPR.org adds.

Shechtman, 70, is a professor of materials science at the Technion - Israel Institute of Technology in Haifa. He will receive $1.5 million with his honor.

Update at noon ET. The prizes still to be awarded: