Accessibility links
Tributes Pour Forth For Apple Co-Founder Steve Jobs : The Two-Way Tributes are pouring forth in honor of Apple co-founder Steve Jobs, who died Wednesday at age 56. He is being remembered as a visionary who co-founded Apple, left the company, and then returned to build it into a global powerhouse.

Tributes Pour Forth For Steve Jobs; Apple Co-Founder Was 56

Tributes Pour Forth For Steve Jobs; Apple Co-Founder Was 56 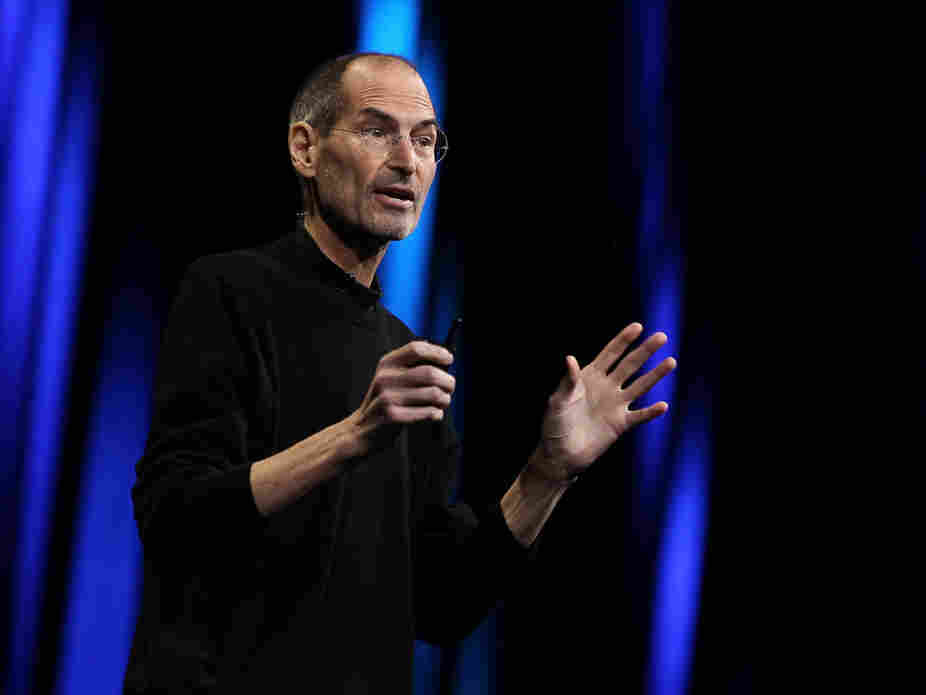 Former Apple CEO Steve Jobs has died at age 56. Here, he delivers the keynote address at the 2011 Apple developers conference. For the event, Jobs returned from sick leave to introduce a new iCloud storage system and the next versions of Apple's iOS and Mac OSX. 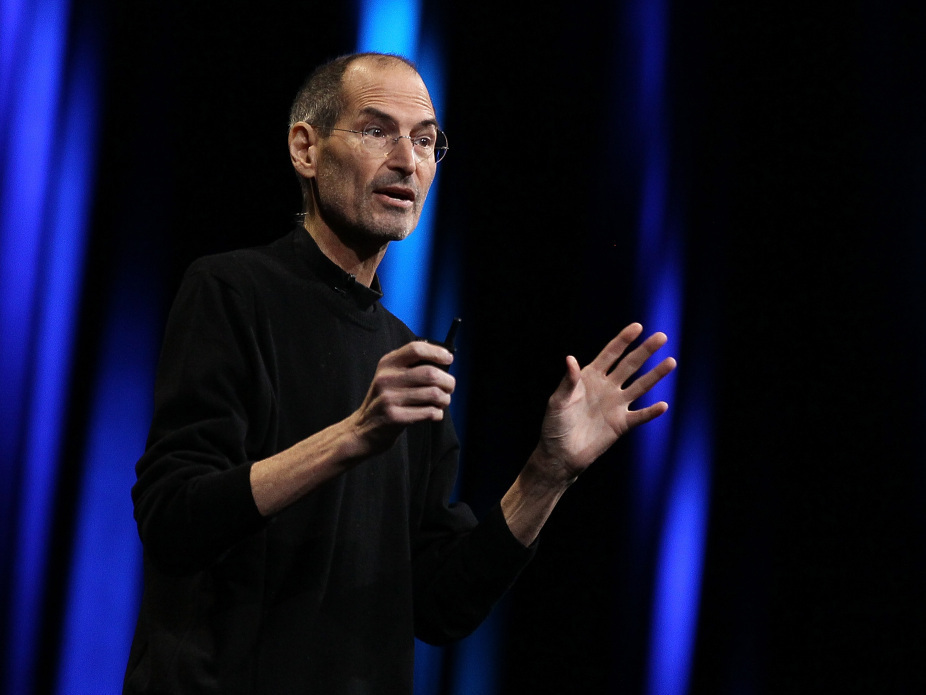 Former Apple CEO Steve Jobs has died at age 56. Here, he delivers the keynote address at the 2011 Apple developers conference. For the event, Jobs returned from sick leave to introduce a new iCloud storage system and the next versions of Apple's iOS and Mac OSX.

Tributes are pouring forth in honor of Apple co-founder Steve Jobs, who died Wednesday at age 56. He is being remembered as a visionary who co-founded Apple, left the company, and then returned to build it into a global powerhouse.

Jobs had been fighting a rare form of pancreatic cancer for several years — a battle that forced him to take several extended breaks from his duties as Apple's CEO. He resigned from that post on Aug. 24, 2011.

Update at 9:40 p.m. ET: The Two Way's coverage will pick back up in the morning, with more stories and reactions to the death of Steve Jobs.

Update at 9:30 p.m. ET: Only days after talking about how "cool" it was to get an iPad 2 early — and directly from Jobs himself — President Obama has released a statement about Jobs' death:

Michelle and I are saddened to learn of the passing of Steve Jobs. Steve was among the greatest of American innovators - brave enough to think differently, bold enough to believe he could change the world, and talented enough to do it.

By building one of the planet's most successful companies from his garage, he exemplified the spirit of American ingenuity. By making computers personal and putting the internet in our pockets, he made the information revolution not only accessible, but intuitive and fun. And by turning his talents to storytelling, he has brought joy to millions of children and grownups alike. Steve was fond of saying that he lived every day like it was his last. Because he did, he transformed our lives, redefined entire industries, and achieved one of the rarest feats in human history: he changed the way each of us sees the world.

The world has lost a visionary. And there may be no greater tribute to Steve's success than the fact that much of the world learned of his passing on a device he invented. Michelle and I send our thoughts and prayers to Steve's wife Laurene, his family, and all those who loved him.

Update at 9:20 p.m. ET: By the time of Jobs' death, Apple had become a cultural force. Here's a sampling of opinion from NPR commenters:

John Goodman (goochisan) wrote: "Thank you, Steve Jobs — you crazy, prescient, egomaniacal genius, you. I wouldn't have a career without you — and the world will be a little less cool and exciting without you in it. Rest in peace."

Philip Ryan (Ruskinrules) wrote: "People either loved him or hated him - but you cannot dispute his brilliance and the vision. And whether as a result of jealousy, competition, or just for the fun of it—you'll continue to hear from the haters. Personally, I greatly admired the man."

And on Twitter, Saoire O'Brien shared a favorite quote: "Be a yardstick of quality. Some people aren't used to an environment where excellence is expected." — Steve Jobs

Update at 9:15 p.m. ET: Members of the younger generation of tech innovators are weighing in on Jobs' passing. Google's Sergey Brin wrote on Google Plus:

"From the earliest days of Google, whenever Larry and I sought inspiration for vision and leadership, we needed to look no farther than Cupertino. Steve, your passion for excellence is felt by anyone who has ever touched an Apple product (including the macbook I am writing this on right now). And I have witnessed it in person the few times we have met.

"On behalf of all of us at Google and more broadly in technology, you will be missed very much. My condolences to family, friends, and colleagues at Apple."

And on Facebook, company founder Mark Zuckerberg wrote, "Steve, thank you for being a mentor and a friend. Thanks for showing that what you build can change the world. I will miss you."

Update at 8:50 p.m. ET: Statements and images honoring Jobs are emerging all over the Internet. One of the most striking is at Boing Boing, which has remade its site to evoke the monochromatic Mac Classic operating environment. And a portrait of Jobs composed of various Apple products has resurfaced, as well (it was a hit in January). 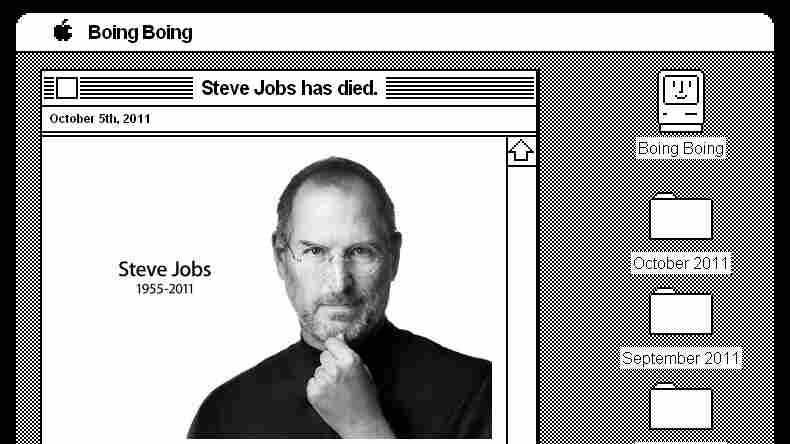 A screengrab shows the Boing Boing website, restyled to resemble one of an early Mac operating system in honor of late Apple co-founder Steve Jobs. 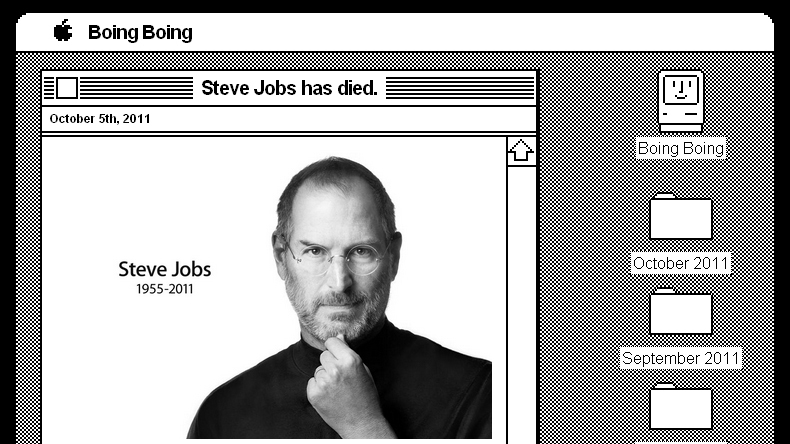 A screengrab shows the Boing Boing website, restyled to resemble one of an early Mac operating system in honor of late Apple co-founder Steve Jobs.

Update at 8:40 p.m. ET: Microsoft co-founder Bill Gates says that Jobs had a "profound impact" that will last for years. Here's his statement:

"I'm truly saddened to learn of Steve Jobs' death. Melinda and I extend our sincere condolences to his family and friends, and to everyone Steve has touched through his work.

Steve and I first met nearly 30 years ago, and have been colleagues, competitors and friends over the course of more than half our lives.

The world rarely sees someone who has had the profound impact Steve has had, the effects of which will be felt for many generations to come.

For those of us lucky enough to get to work with him, it's been an insanely great honor. I will miss Steve immensely."

For years, Gates and Jobs were fierce competitors. But they shared a stage in 2007, when they were interviewed for The Wall Street Journal's All Things Digital conference. You can watch that video here:

The video is also archived at the All Things Digital site. If you poke around there, you might find Jobs telling this joke about his leadership skills:

"Apple is like a ship, with a hole in the bottom. Leaking water. And my job is to get the ship pointed in the right direction."

Update at 8:25 p.m. ET: After founding Apple with Steve Wozniak in 1976, Jobs went through ups and downs in his career — and reshaped the computer, music, and cellphone industries. NPR has a timeline of his career.

Update at 8:15 p.m. ET: The family of Steve Jobs has released a statement:

In his public life, Steve was known as a visionary; in his private life, he cherished his family. We are thankful to the many people who have shared their wishes and prayers during the last year of Steve's illness; a website will be provided for those who wish to offer tributes and memories.

We are grateful for the support and kindness of those who share our feelings for Steve. We know many of you will mourn with us, and we ask that you respect our privacy during our time of grief.

In recent months, NPR's Laura Sydell spoke with several people who knew the tech innovator, including Susan Rockrise, a creative director who worked with Jobs.

"Simplifying complexity is not simple," Rockrise tells Laura. "It is the greatest, greatest gift to have someone who has Steve's capabilities as an editor and a product designer edit the crap away so that you can focus on what you want to do."

In a statement on its website, the technology firm said:

Apple has lost a visionary and creative genius, and the world has lost an amazing human being. Those of us who have been fortunate enough to know and work with Steve have lost a dear friend and inspiring mentor. Steve leaves the company that only he could have built, and his spirit will forever be the foundation of Apple.

On the same page, the company also published an email address that it invited fans of Apple to use to send memories or condolences.

Stories seem to abound about Steve Jobs — like the one Eyder Peralta relayed in this space in August, concerning his attention to detail, and how the Google logo appeared on the iPhone. Jobs simply was not content with the shade of yellow the developers had used, and he took pains to ensure they got it right.