Accessibility links
Seemingly Bogus Website Uses 'Occupy Party' Name... To Sell Ads : The Two-Way As the Occupy Wall Street movement inspires protests in more U.S. cities, a website has popped up that seems to be trading on the group's lack of formal organization. And the only obvious goal of the site? To rake in profits on advertising. 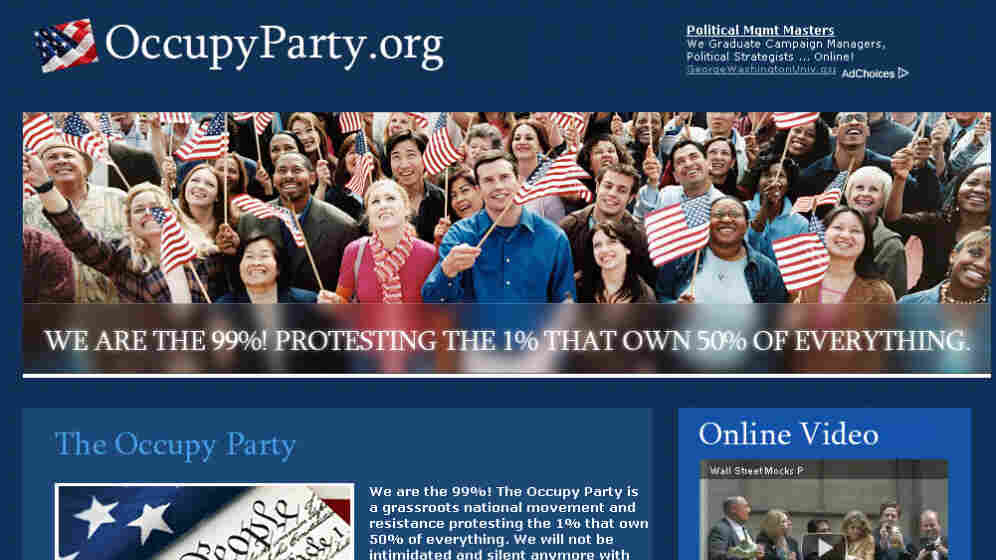 A new website purports to be the work of "Occupy Party" — but the Occupy Wall Street movement hasn't heard of it. And it mainly features Google Ads, not grass-roots information. 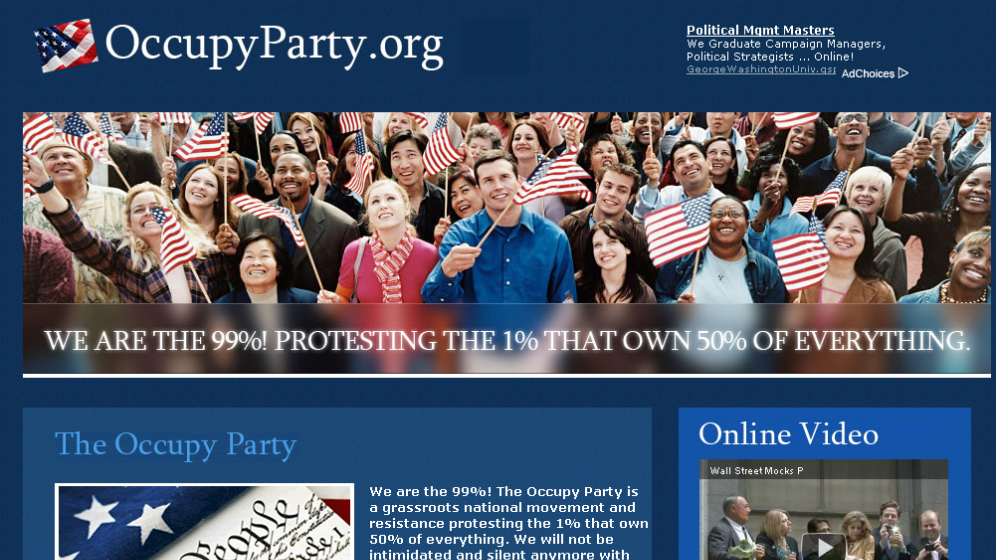 A new website purports to be the work of "Occupy Party" — but the Occupy Wall Street movement hasn't heard of it. And it mainly features Google Ads, not grass-roots information.

As the Occupy Wall Street movement inspires protests in more U.S. cities, a website has popped up that seems to be trading on the group's somewhat nebulous status and lack of formal organization.

The site, called OccupyParty.org, has been disavowed on the actual Occupy Wall Street site, where the author also noted, "We are not a political institution."

OccupyParty has a landing page that features what you might expect from a young political movement: images of a diverse crowd of smiling people, waving flags; an image of the U.S. Constitution; and a video purporting to show dastardly Wall Street bankers.

The only snag: other than an embedded YouTube video (from another group), the page is devoid of any working links to information about Occupy Wall Street — or even more about "The Occupy Party."

A look at the page's source code finds that even the link under "Latest Events" is a mere hashtag placeholder — which returns anyone who clicks on it to the top of the page they're already on.

Other than the video, there are only three working outbound links. And they're all Google Ad slots — a circumstance that would be highly unusual for a grass-roots group seeking to round up more support.

In that light, the page's welcome message from "The Occupy Party" comes off a bit like a sarcastic joke:

We are the 99%! The Occupy Party is a grassroots national movement and resistance protesting the 1% that own 50% of everything. We will not be intimidated and silent anymore with our civil resistance and street protests. We will no longer tolerate the greed and corruption of the 1%.

Of course, it's possible that something other than greed inspired this site's creation. But whatever that something may be, it's not immediately evident.

A bit of research turns up more information about the site. It was registered on Oct. 2, 2011, using a post office box in Australia — the Fortitude Valley section of Brisbane, to be exact.

If the site is in fact a jaded attempt to cash in on burgeoning interest in the Occupy Wall Street movement, its administrators are being sneaky in another way, as well. Because as we know here at NPR.org, using the ".org" suffix traditionally means that you're a non-commercial enterprise.

Update at 2 p.m. ET: An email sent to the registrar's account listed online, sent before this post was published, has not yet been answered.