Accessibility links
A Nobel Peace Prize For The Arab Spring? Who Would That Go To? : The Two-Way The world will soon learn who won this year's Nobel Peace Prize. Not surprisingly, there's been much speculation that the prize committee might honor the participants of the Arab Spring. But who, exactly, would get the award?

A Nobel Peace Prize For The Arab Spring? Who Would That Go To?

A Nobel Peace Prize For The Arab Spring? Who Would That Go To? 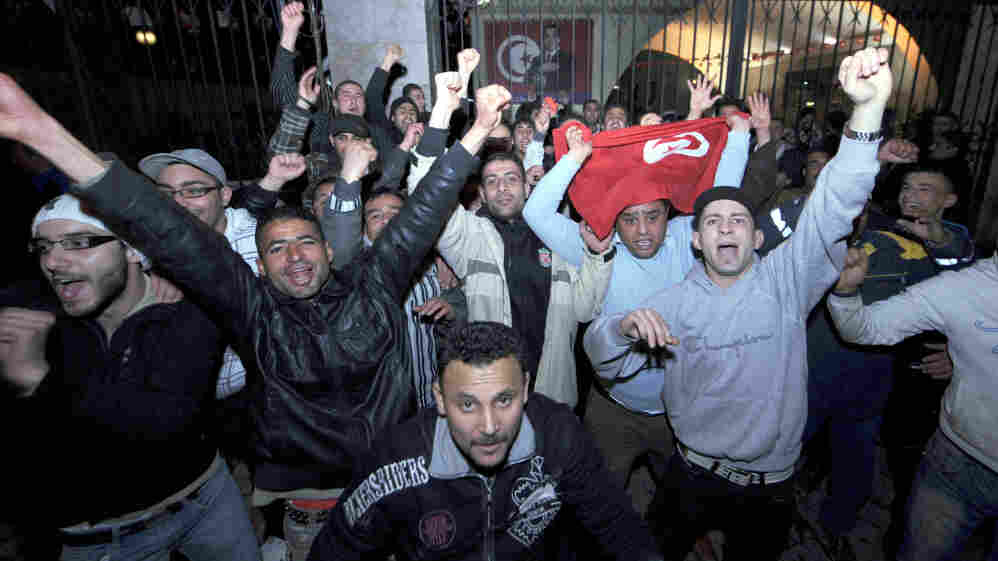 If the Nobel Peace Prize is to go to someone involved with the Arab Spring, it may be difficult to choose who gets the award. Here, men celebrate in Tunis after President Zine El Abidine Ben Ali said he would not seek another term.

On Friday, the eyes of the world will turn toward the general direction of Scandinavia, to learn who won this year's Nobel Peace Prize. Not surprisingly, there's been a lot of speculation that the prize committee might honor the participants of the Arab Spring. After all, people from Tunisia to Egypt and across the Mideast have risen up against their governments, demanding basic human rights, democracy, greater opportunity and a life of dignity.

The Arab Spring would be an obvious choice for the prize — except for the fact that the Arab Spring isn't an organized entity. It's a diverse, loosely associated community of millions of people across the Arab world, with no central organizer. And the Nobel committee doesn't award peace prizes to the populations of entire countries. (Think of all the speeches we'd have to hear, not to mention the endless stream of medals they'd have to produce and mail out to everyone.)

Does that mean the Nobel committee won't give the award in honor of the Arab Spring? Not at all. In fact, there are a number of people and organizations who could be chosen to represent the greater community of activists across the Arab world.

First, let's discuss the people who might make brilliant choices, but will very likely not qualify because they have died. Nobel committee rules generally don't allow posthumous awards — this week's Nobel Prize for Medicine notwithstanding.

This technicality will probably disappoint many people hoping for an Arab Spring-related peace prize, because there are at least two very convincing — yet deceased — candidates who come to mind.

Mohamed Bouazizi. Bouazizi was the young vendor in Sidi Bou Zid, Tunisia, who set himself on fire last December to protest against corrupt authorities who humiliated him by taking away his only source of income — his vegetable cart. As word of Bouazizi's self-immolation spread across Tunisia, it catalyzed solidarity protests all over the country. Four weeks after he set himself on fire, the president of Tunisia fled the country, becoming the first domino to fall in what became known as the Arab Spring.

Bouazizi, alas, succumbed to his injuries in early January, never knowing the extraordinary geopolitical change he helped start across the region. For many people, Bouazizi would probably be the ideal choice for the prize — if the committee only allowed it.

Khaled Said. In June 2010, a young Egyptian computer programmer named Khaled Said was beaten to death for no apparent reason by police in Alexandria. Witnesses later said he did nothing to provoke the attack, while police claimed he died from "suffocating on a packet of hashish."

Photos of his severely beaten body proved otherwise, and they circulated across the Internet, leading to the creation of a Facebook page called We Are All Khaled Said. Hundreds of thousands of Egyptians joined the page, serving as an important step toward mobilization for Egypt's eventual revolution.

Bouazizi and Said aren't the only people who might make powerful posthumous choices for a Nobel Prize, if they only were able to qualify. Libya's Mohamed Nabbous, the first independent journalist to stand up against the Gadhafi regime, comes to mind; he was killed by a sniper while documenting Gadhafi's forces violating a cease-fire agreement, just hours before NATO bombs began to fall on the country.

And in Syria, there's Hamza al-Khatib, the 13-year-old boy who was inexplicably tortured, castrated and murdered by government security forces, prompting thousands of previously neutral Syrians to march alongside the protesters.

But the fact that Nabbous and al-Khatib died well after the Arab Spring had already begun makes their chances even less likely.

A Google Executive, And Activists

Among living participants in the Arab Spring, the most talked-about candidate is Wael Ghonim, the Google executive who created the We Are All Khaled Said Facebook page and became one of the most prominent faces of the Egyptian revolution. Time magazine named Ghonim in the No. 1 spot of its annual Time 100 list of the world's most influential people. Ghonim is certainly the best-known leader across the Arab Spring, so don't be surprised if he is selected. It's widely believed he has been nominated.

But that doesn't mean Ghonim is the only choice.

Lina Ben Mhenni. Ben Mhenni blogs under the name A Tunisian Girl and is one of the most influential bloggers in North Africa. She was one of the very first people to openly challenge the Tunisian government and document attacks against protesters. It's been reported that she is also among the nominees for the prize.

Israa Abdel Fattah. This Egyptian blogger was one of the founders of the April 6th Movement, which came together in 2008 to support a workers' strike in the town of Mahalla. Through her efforts, the movement crystallized via Facebook and other social media tools, attracting tens of thousands to its ranks and making it one of the best-organized groups at the start of the Egyptian revolution.

It's also possible that the movement itself might be considered for the prize, along with the group's co-founders, Ahmed Maher, Asmaa Mafouz and Waleed Rashed.

Sami Ben Gharbia. Gharbia is a Tunisian activist who spent more than a decade living in exile in Europe. He serves as the advocacy director of Global Voices Online, a nonprofit organization that curates world news from bloggers in countries that generally don't get covered by Western media.

Gharbia was one of the first people to use online maps in support of human rights, creating a Tunisian prison map that documented the location of political prisoners around the country.

He was also one of the founders of Nawaat.org, a group blog launched in 2004 to fight for the rights of Tunisians. Because the blog operated outside Tunisia, it was able to collect and archive literally hundreds of photos and videos from the earliest days of the Tunisian uprising, helping to spread the story of what was going on to average Tunisians. Nawaat.org itself, or its co-founder, Riadh Guerfali, might also be up for consideration.

Tawwakol Karman. Karman is the leader of Women Journalists Without Chains, a Yemeni human-rights organization that has long fought for freedom of the press. She rose to prominence as one of the leading voices of the uprising in Yemen, which continues to attract hundreds of thousands of protesters to the streets of Sanaa and Taiz almost every week.

There's also a recently formed coalition of opposition forces known as the National Council for the Forces of the Peaceful Revolution, but given that it's such a new group, it's hard to say whether it could have been nominated.

One of many political prisoners in Bahrain. Bahrain has fallen off the radar for most people, but there is still a group of activists fighting for major reforms in the country. Some of them, such as Abdulhadi Alkhawaja, were recently sentenced to life in prison for their involvement in the protests. Others, such as a group of doctors tried in military court for treating protesters, could also make an intriguing choice.

Global Voices Online. I would be truly (and pleasantly) surprised if it were up for consideration, but Global Voices would make a very interesting choice. Launched at Harvard's Berkman Center in 2005, it has served as a nexus of bloggers and activists from around the world. (Full disclosure — I was an early contributing blogger for Global Voices prior to coming to NPR.)

As I mentioned, Sami Ben Gharbia of Tunisia works for Global Voices, and it has been a strong supporter of bloggers across the Arab world for many years. But being a U.S.-based organization probably lessens its chances of receiving a prize, especially if it's tied to the Arab Spring.

And speaking of lessening their chances ...

Having said that, the Arab Spring hasn't been a series of social media revolutions, per se. While the protests have certainly utilized social media, it was the protesters themselves who marched in the streets and died for their cause — and ultimately, those acts made the decisive difference.

Picking any person or company affiliated with a social media platform may seem like an easy choice, but it's also probably a cop-out — not to mention a perceived insult to all the people in the Arab world who participated directly in their countries' protests.

So there's a quick list of some of the people and groups affiliated with the Arab Spring that come to mind. It's by no means exhaustive, but I wouldn't be completely shocked if I woke up tomorrow and heard one or more of their names being mentioned in an NPR newscast.

Do you think it'll go to someone affiliated with the Arab Spring? Did I miss anyone? I'd love to hear your thoughts. Either way, I guess we'll know soon enough.

Andy Carvin is senior strategist at NPR. Since the days of the Tunisian revolution, he has coordinated NPR's social media coverage of the Arab Spring, primarily through his Twitter account, @acarvin, and his many community members who help him keep up with every country affiliated with the Arab Spring.