Accessibility links
Egyptian Blogger To Face Retrial; His Hunger Strike Approaches 50 Days : The Two-Way Maikel Nabil Sanad was not imprisoned, beaten or tortured until he criticized the post-Mubarak military leaders, his father says.

An Egyptian military appeals court ruled today that blogger Maikel Nabil Sanad, who was sentenced to prison this spring for insulting government authorities, would receive a new military trial. The decision is regarded as a setback by his supporters, who were hoping for a reduced sentence or a retrial in a civilian court. 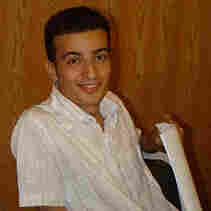 During the Egyptian uprising, Sanad was arrested, beaten and tortured for carrying a sign that read "We want it civil, not religious or military." He was released after two days. In late March, after the fall of Egyptian President Hosni Mubarak, Sanad filed a complaint with Egypt's prosecutor general, asking for an investigation into his imprisonment and treatment. Instead, authorities started investigating Sanad, including reading his Facebook and blog posts.

Among his writings, they found a March 7 blog post entitled "The Army And The People Were Never One Hand," in which he referenced investigations by human rights and news organizations into army abuses against protesters. He was re-arrested by Egyptian military authorities on March 28. Barely two weeks later, an Egyptian military court sentenced him to three years in prison, including hard labor.

"I was always concerned whenever Maikel criticized the former corrupt ruling regime and the power wielded by state security men," Sanad's father told NPR via email. "I tried more than once to advise him in vain. The strange thing is that Maikel has been blogging for about five years, criticizing the former ruling regime, but he was not imprisoned, beaten or tortured as he was for writing his first blog post where he criticized the military after the revolution."

Since his arrest and sentencing, it's been very difficult for Sanad's family to communicate with him on a regular basis. "I used to see him when he attended the trial hearings," his father wrote. "After he was sentenced, we were prohibited from visiting for a month, and then we were permitted to visit once every 15 days. The prison does not permit mobile phones, so we get all his news during those visits."

In late August, Sanad decided to go on a hunger strike. Wednesday is the 50th day of that strike, and his family is concerned that it might kill him. According to them, his weight is down to about 97 lbs.

"When I visited him in September, I tried to convince him to reconsider going on strike," his father added. "But he refused to, because he was severely depressed, having seen people accused of the same charges for which he had been imprisoned being released by the military prosecutor and their charges dropped. The same did not happen to them."

"I am in principle against the hunger strike, because hunger striking here, under these circumstances, I know beyond a doubt will produce no result because those responsible do not care whether he lives or dies. No responsible officials have come to try and solve his problems or to negotiate with him to end the strike."

"Now it is time to end the strike, as quickly as possible," he wrote. "Time is not on his side and his life is in grave danger."

Sanad, however, has been insistent that he continue his hunger strike. In a letter from him posted on MideastYouth.com, he made his case for the strike. "If death is going to come whether we like it or not, why not die with our dignity instead of death coming to us to find us alive in humiliation?" he wrote. "So, let's stop fearing death; our courage in challenging death would lead to our victory, exactly as our courage challenging death in Tahrir square at the beginning of our revolution was the reason for our victory over Mubarak."

Unlike some other protesters tried in military court, Sanad's case has not received the same intensity of support from activists. Sanad, a Coptic Christian, has made statements supporting better relations between Egypt and Israel, which has ruffled the feathers of some activists who see Israel as an enemy.

"Some people's criticisms of Maikel's opinion on Israel occur because they do not know the full extent of everything he wrote about Israel," his father said. "During the revolution he contacted an Israeli activist and called on the Israeli and American people to support the Egyptian revolution, and he did so out of love for his country. However, some ignorant people chose to misinterpret these opinions and began spreading rumors and lies."

The latest word from Egypt is that it is unlikely Sanad will be released while he awaits the new trial — something supporters had hoped for. In the meantime, his hunger strike continues.