Accessibility links
For Those Who Aren't Fans Of The '99 Percent,' There's The '53 Percent' : The Two-Way The Occupy Wall Street movement has latched on to the idea that its supporters are the "99 percent" of Americans who aren't superrich. The "53 percent" say they're the Americans who pay most of the taxes.

The Occupy Wall Street movement, as we noted last week, has latched on to the idea that its supporters are the "99 percent" of Americans who aren't superrich and have been falling behind in recent years.

Conservative blogger and CNN contributor Erick Erickson is now getting some attention for the "We are the 53%" campaign he started at his RedState website and has taken to Tumblr and Twitter (#iamthe53, vs. the 99 percenters' #1amthe99 hashtag). 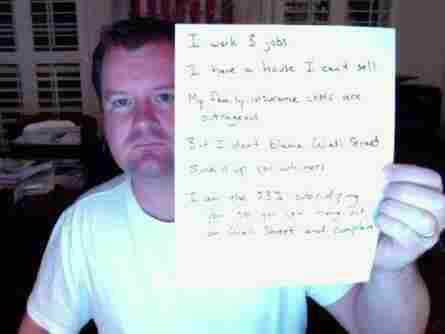 Erick Erickson with his photo that started the "53 percent" countermeme.

The gist of Erickson's argument is that he and many others are among the half or so of Americans who pay income taxes, and therefore are "the 53% of Americans subsidizing these people so they can go hang out on Wall Street to complain." He calls the occupy protesters "whiners."

On the 53 percent meme, The Tax Policy Center at the Urban Institute and Brookings Institution points out that "about half of people who don't owe income tax are off the rolls not because they take advantage of tax breaks but rather because they have low incomes." Most of the rest "pay no income tax because of provisions that benefit senior citizens and low-income working families with children."

And, "many of those who don't pay income tax do pay other taxes—federal payroll and excise taxes as well as state and local income, sales, and property taxes."