Accessibility links
Holder: Factions Of Iran Government Behind Terror Plot : The Two-Way The plan was to assassinate the Saudi ambassador to the U.S. and possibly attack the Saudi and Israeli embassies in Washington, D.C. Holder also said the plot involved an attempt to hire killers from a Mexican drug cartel, and that Iran would be held to account. 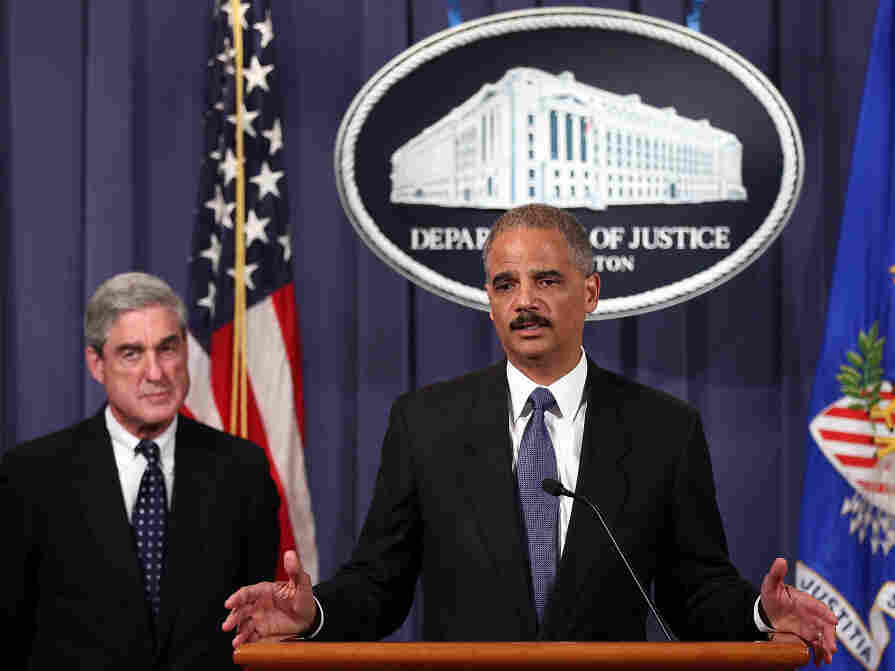 U.S. Attorney General Eric Holder (right) and FBI Director Robert Mueller announce a plot had been foiled involving men allegedly linked to the Iranian government to kill the Saudi ambassador to the U.S. and bomb the embassies of Saudi Arabia and Israel in Washington at a news conference October 11, 2011 in Washington, DC. 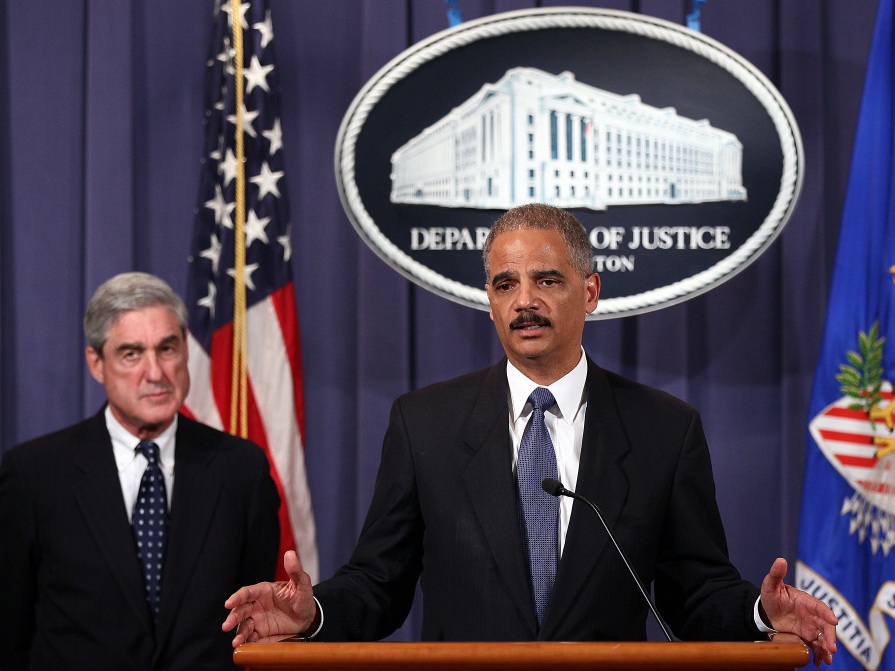 U.S. Attorney General Eric Holder (right) and FBI Director Robert Mueller announce a plot had been foiled involving men allegedly linked to the Iranian government to kill the Saudi ambassador to the U.S. and bomb the embassies of Saudi Arabia and Israel in Washington at a news conference October 11, 2011 in Washington, DC.

An Iranian-directed plan to assassinate the Saudi ambassador to the U.S. and possibly attack the Saudi and Israeli embassies in Washington has been disrupted, Justice Department officials announced this afternoon.

Saying that the alleged "deadly plot ... [was] directed by factions of the Iranian government" and involved an attempt to hire killers from a Mexican drug cartel, Attorney General Eric Holder also said Iran will be held to account. 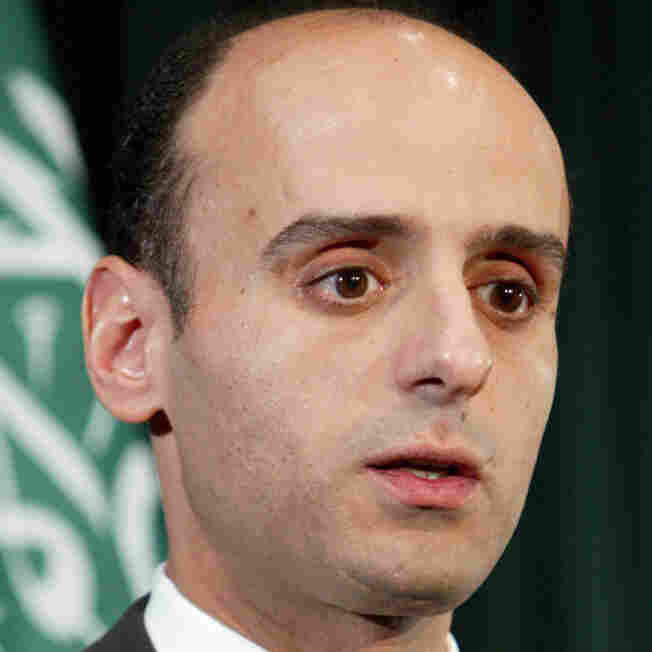 The criminal complaint "filed today in the Southern District of New York," Justice says, "charges Manssor Arbabsiar, a 56-year-old naturalized U.S. citizen holding both Iranian and U.S. passports, and Gholam Shakuri, an Iran-based member of Iran's Qods Force," in the scheme. Among the charges against them:

"Conspiracy to engage in foreign travel and use of interstate and foreign commerce facilities in the commission of murder-for-hire; conspiracy to use a weapon of mass destruction (explosives); and conspiracy to commit an act of international terrorism transcending national boundaries."

We are shutting down the live blog now, but NPR.org's main story will be updated through the night. Also NPR's Alan Greenblatt reports on how these allegations put the United States in the middle of a long-running feud between Saudi Arabia and Iran.

CNN has a bit more from Ali Akbar Javanfekr, a spokesman for Iranian President Mahmoud Ahmadinejad.

"I think the U.S. government is busy fabricating a new scenario and history has shown both the U.S. government and the CIA have a lot of experience in fabricating these scenarios and this is just the latest one," he said. "I think their goal is to reach the American public. They want to take the public's mind off the serious domestic problems they're facing these days and scare them with fabricated problems outside the country."

The embassy of Saudi Arabia has released a statement about the plot:

The Royal Embassy of Saudi Arabia would like to express its appreciation to the responsible agencies of the United States government for preventing a criminal act from taking place. The attempted plot is a despicable violation of international norms, standards and conventions and is not in accord with the principles of humanity.

In an interview with the AP Secretary of State Hilary Clinton said the alleged Iranian plot "crosses a line."

"This really, in the minds of many diplomats and government officials, crosses a line that Iran needs to be held to account for," Clinton said.

Clinton acknowledged audaciousness of the plot.

"The idea that they would attempt to go to a Mexican drug cartel to solicit murder-for-hire to kill the Saudi ambassador, nobody could make that up, right?" she said.

She also said that the complaints against Iran are "well-founded."

The New York Times has more on how Saudi Arabia is reacting the news:

Abdullah Alshamri, a Saudi official in Riyadh, predicted the disclosure would send Iranian-Saudi relations to "their lowest point yet." Though no government steps had been taken, he suggested that a diplomatic row was inevitable.

"We're expecting from our government a serious and tough reaction to give a message to the Iranians that enough is enough," he said by telephone. "If we keep our diplomatic ties with the Iranians, they will think we are weak and they will keep trying to attack us."

If the allegations are true and Iran's "top special forces" were involved in directing the plan, then the scheme could go all the way to Iran's Supreme Leader, says Richard Clarke, a top White House counterterrrorism adviser in the Clinton and Bush administrations. And, he adds, "ultimately [Iran] had to believe we would find out they were behind it ... and would attack them militarily." That, he tells NPR's Guy Raz, "suggests, if true, that they're looking for a fight."

Clarke suggests that if the allegations are correct, "there may be elements inside Iran that think it would be good for them in terms of domestic politics for there to be a fight with the United States." A U.S. strike on Iran might, he says, might boost support for Iran's leaders as people there "rally around the flag."

Clarke adds, though, that this is "a really strange plot." Iranian secret services, "are very professional," he says. "To hire some Mexican drug gang so indirectly" strikes him as highly unusual.

Much more from Clarke's conversation with Guy will be on today's All Things Considered. Click here to find an NPR station that broadcasts or streams the show.

According to The Associated Press, "Secretary of State Hillary Rodham Clinton says the U.S. is preparing new penalties against Iranians following the disruption of an alleged plot to assassinate a Saudi diplomat in the U.S. In an interview with The Associated Press, Clinton said the Treasury Department soon would put more people under sanctions. She also predicted the plot would further isolate Iran."

At The Atlantic, Steve Clemons writes that:

"Ambassador Adel al-Jubeir is not a member of the Saudi royal family, but he is widely considered to be the closest national security adviser and confidante to King Abdullah. ...

"Secondly, one of the key themes that has frequently emerged here at the Abu Dhabi meetings of the World Economic Forum this week is that a more intense proxy struggle is taking place between Saudi Arabia and Iran throughout the Middle East as the perception of American strategic contraction grows.

"This alleged assassination plot simultaneously may indicate both the intensity of anti-Saudi passion among Iran's senior leaders and a greater aggressiveness by Iran against the US."

CNN reports being told by a spokesman for Iranian President Mahmoud Ahmadinejad that these are "false allegations" and a "child's story" meant to distract Americans from domestic problems.

Justice says in its statement that:

It was Arbabsiar who allegedly tried to hire a member of a Mexican drug cartel to carry out the killing — not realizing that the person he was dealing with was a Drug Enforcement Agency confidential source. Then:

"On Sept. 29, 2011, Arbabsiar was arrested by federal agents during a flight layover at JFK International Airport in New York. Several hours after his arrest, Arbabsiar was advised of his Miranda rights and he agreed to waive those rights and speak with law enforcement agents. During a series of Mirandized interviews, Arbabsiar allegedly confessed to his participation in the murder plot.

"According to the complaint, Arbabsiar also admitted to agents that, in connection with this plot, he was recruited, funded and directed by men he understood to be senior officials in Iran's Qods Force. He allegedly said these Iranian officials were aware of and approved of the use of [the confidential source] in connection with the plot; as well as payments to [the confidential source]; the means by which the Ambassador would be killed in the United States and the casualties that would likely result."

According to the Justice Department's statement, Arbabsiar "met on a number of occasions in Mexico with a DEA confidential source (CS-1) who has posed as an associate of a violent international drug trafficking cartel. ... According to the complaint, Arbabsiar arranged to hire CS-1 and CS-1's purported accomplices to murder the Ambassador, and Shakuri and other Iran-based co-conspirators were aware of and approved the plan. ...

"The President was first briefed on this issue in June and directed his Administration to provide all necessary support to this investigation. The disruption of this plot is a significant achievement by our intelligence and law enforcement agencies, and the President is enormously grateful for their exceptional work in this instance and countless others." — Tommy Vietor, National Security Council spokesman, in a statement just emailed to reporters.

Click on the title "Alleged Plot" in the box below to pop up a copy of the Justice Department's statement about the allegations.

The Justice Department has posted a statement about the case here. It says, in part:

"A criminal complaint filed today in the Southern District of New York charges Manssor Arbabsiar, a 56-year-old naturalized U.S. citizen holding both Iranian and U.S. passports, and Gholam Shakuri, an Iran-based member of Iran's Qods Force, which is a special operations unit of the Iranian Islamic Revolutionary Guard Corps (IRGC) that is said to sponsor and promote terrorist activities abroad. ...

"The criminal complaint alleges that, from the spring of 2011 to October 2011, Arbabsiar and his Iran-based co-conspirators, including Shakuri of the Qods Force, have been plotting the murder of the Saudi Ambassador to the United States. In furtherance of this conspiracy, Arbabsiar allegedly met on a number of occasions in Mexico with a DEA confidential source (CS-1) who has posed as an associate of a violent international drug trafficking cartel. According to the complaint, Arbabsiar arranged to hire CS-1 and CS-1's purported accomplices to murder the Ambassador, and Shakuri and other Iran-based co-conspirators were aware of and approved the plan. With Shakuri's approval, Arbabsiar has allegedly caused approximately $100,000 to be wired into a bank account in the United States as a down payment to CS-1 for the anticipated killing of the Ambassador, which was to take place in the United States."

Update at 2:15 p.m. ET. "Directed By Factions Of The Iranian Government," Holder Says:

The attorney general just announced that the court complaint alleges this was a "deadly plot ... directed by factions of the Iranian government."

Authorities say the Iranian Revolutionary Guard is behind the plot, Holder said, and that the scheme was "conceived, sponsored and directed from Iran." The plan was to have members of the Mexican drug cartel carry out the attacks, authorities say.

Arbabsiar, he added, has been in custody since Sept. 29 and has been providing information about the plot. Shakuri is "at large," Holder said.

The network adds that:

"The officials said the plot included the assassination of the Saudi Arabian ambassador to the United States, Adel Al-Jubeir, with a bomb and subsequent bomb attacks on the Saudi and Israeli embassies in Washington, D.C."

"U.S. authorities broke up an alleged plot to bomb the Israeli and Saudi Arabian embassies in Washington and assassinate the Saudi ambassador to the United States, court documents and a U.S. official said on Tuesday. The criminal complaint, unsealed in federal court in New York City, identified the two alleged plotters as Manssor Arbabsiar and Gholam Shakuri. Both were originally from Iran and Arbabsiar is a naturalized U.S. citizen, it said."

CNN is reporting the story as well.

Attorney General Eric Holder and other officials are due to brief reporters in the next few minutes. We'll be updating this post with more information.