Accessibility links
WikiLeaks: Japan Rebuffed Idea Of U.S. Apology For Hiroshima : The Two-Way In a leaked diplomatic cable, a Japanese government official said a visit by President Obama to Hiroshima was "premature" and an apology for using atomic bombs was a "non-starter." 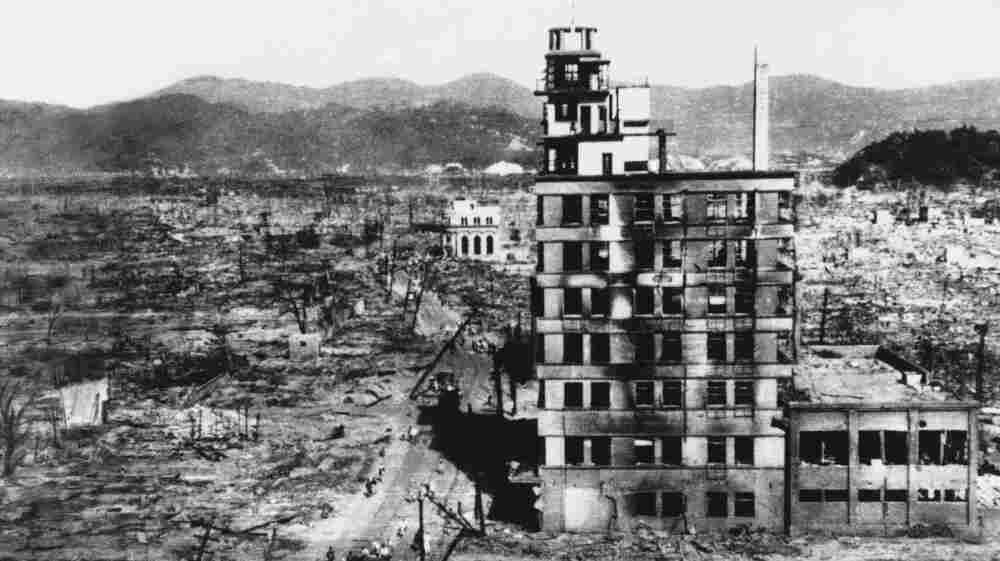 Survivors walk past one of the few building still standing in 1945, two days after an atomic bomb was dropped on Hiroshima, Japan on August 6, 1945. 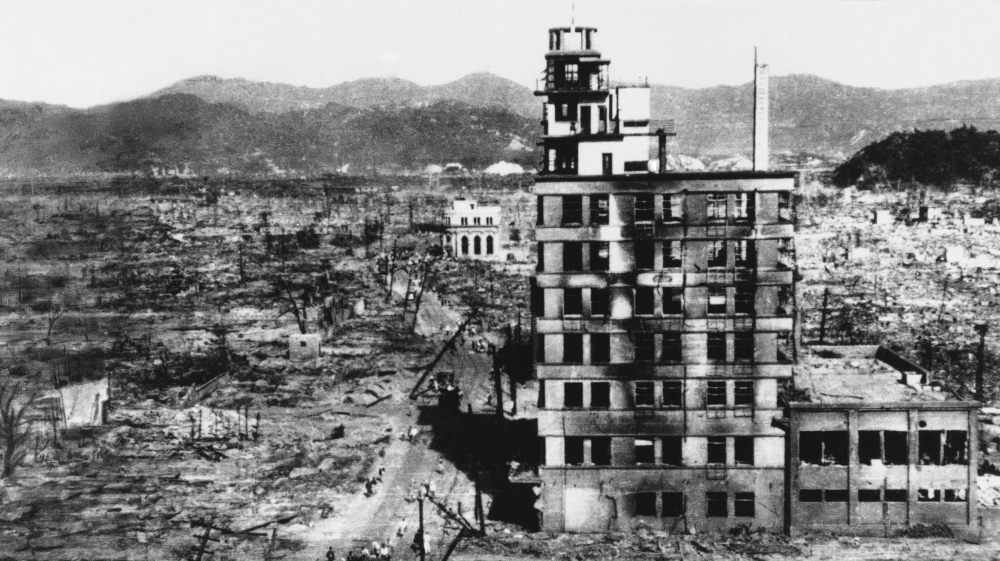 Survivors walk past one of the few building still standing in 1945, two days after an atomic bomb was dropped on Hiroshima, Japan on August 6, 1945.

A tiny portion of a secret cable released last month by WikiLeaks is just now making its way to the United States. In the Sept. 2009 cable, U.S. Ambassador to Japan John Roos tells the Obama administration that Japan doesn't think it's a good idea for President Obama to visit Hiroshima or to apologize for using an atomic bomb on two Japanese cities during World War II.

The contents of the cable were reported back in September by The Japan Times and ABC News picked it up, today.

The cable was sent to Secretary of State Hillary Clinton in advance of President Obama's visit to the country. Here's the important part, where Roos refers to a conversation with the then Vice Foreign Minister Mitoji Yabunaka:

VFM Yabunaka pointed out that the Japanese public will have high expectations toward President Obama's visit to Japan in November, as the President enjoys an historic level of popularity among the Japanese people. Anti-nuclear groups, in particular, will speculate whether the President would visit Hiroshima in light of his April 5 Prague speech on non-proliferation. He underscored, however, that both governments must temper the public's expectations on such issues, as the idea of President Obama visiting Hiroshima to apologize for the atomic bombing during World War II is a "non-starter." While a simple visit to Hiroshima without fanfare is sufficiently symbolic to convey the right message, it is premature to include such program in the November visit.

As you might expect, the cable didn't go over too well with atomic bomb survivors and proponents of non-proliferation. The English-version of The Mainichi Daily News ran a story about the reaction:

Haruko Moritaki, 72, a joint representative of the Hiroshima Alliance for Nuclear Weapons Abolition, commented, "It was probably a political decision stemming from concerns that relations between Japan and the United States could become strained." However, she added, "Coming to Hiroshima is a symbol of determination to eliminate nuclear weapons, and the Japanese government should normally be requesting such a visit. Its efforts are all a sham."

The mayor of Hiroshima Kazumi Matsui would not comment on the leaked cable, but he told the paper that he would continue to seek a presidential visit.

"It's important for the U.S. president, who has a great say in abolishing nuclear weapons from the world, to visit Hiroshima," Matsui told the paper. "What is important now is not exposed facts about the past but how to promote our present [non-proliferation] efforts," the mayor added.

The cable leaves a lot of questions open, including whether the U.S. was offering an apology and what sort of domestic and international rifts an apology could unveil. The United States has made it policy not to comment on leaked cables.

White House spokesman Tommy Vietor says that while the administration does not comment on leaked cables, "there was never any plan for the president to apologize. The President's visit speaks for itself."

In that November 2009 trip Obama delivered a speech in Tokyo in which he touched on the subject of nuclear arms saying:

Let me be clear: so long as these weapons exist, the United States will maintain a strong and effective nuclear deterrent that guarantees the defense of our allies – including South Korea and Japan.

But we must recognize that an escalating nuclear arms race in this region would undermine decades of growing security and prosperity. So we are called upon to uphold the basic bargain of the Nuclear Non-Proliferation Treaty – that all nations have a right to peaceful nuclear energy; that nations with nuclear weapons have a responsibility to move toward nuclear disarmament; and those without them have the responsibility to forsake them.

Indeed, Japan serves as an example to the world that true peace and power can be achieved by taking this path. For decades, Japan has enjoyed the benefits of peaceful nuclear energy, while rejecting nuclear arms development – and by any measure, this has increased Japan's security, and enhanced its position.