Accessibility links
Man Celebrates 26-Year Reunion — With An Old Bike : The Two-Way Michael Gill is the proud owner of a bicycle. It's not new, it's not cutting-edge — in fact, it's just a frame. But it's tied to Gill's past, when he rode the Peugeot for thousands of miles in the 1980s. That's when he had to part with the elite machine — until last month, when he found it again. 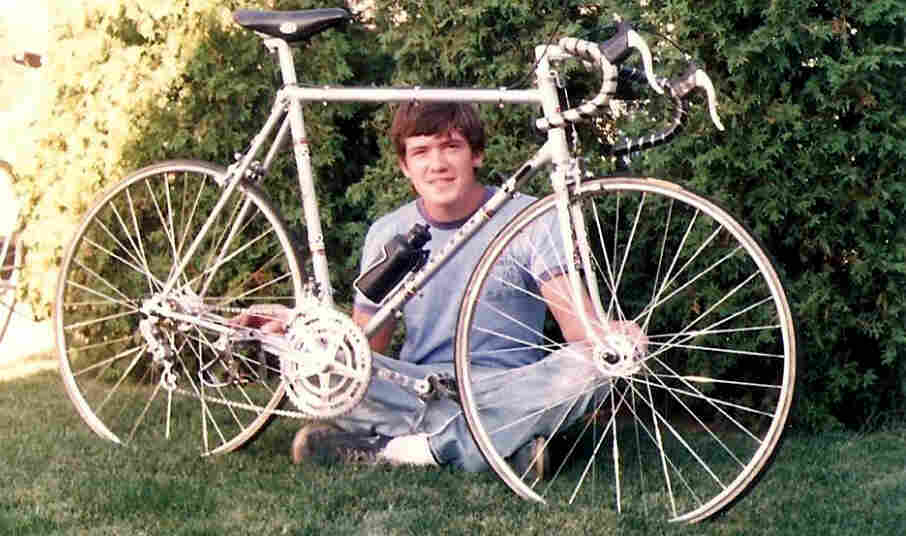 Michael Gill was 21 when he sold his Peugeot racing bike in 1985. 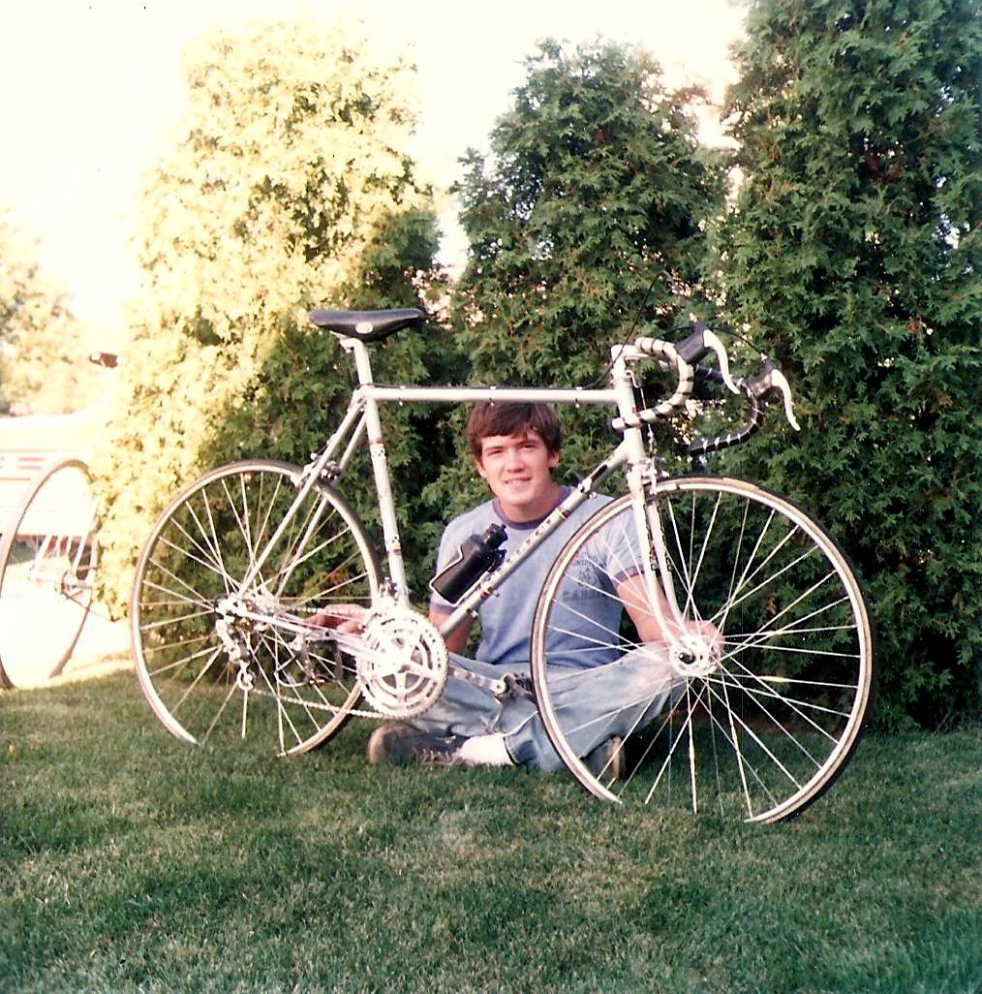 Michael Gill was 21 when he sold his Peugeot racing bike in 1985.

Michael Gill is the proud owner of a bicycle. It's not new, and it's not flashy — in fact, right now, it's just a frame. But it's tied to Gill's past, when he rode the Peugeot bike for thousands of miles in the 1980s. That's when he had to part with the elite machine — until last month, when he found it again.

Writing on his blog, Gyroscope That Takes You Places, Gill says, "My training logs show I rode that bike more than 30,000 miles."

Gill's Peugeot was a close relative of the bikes ridden into history by cycling legends like France's Bernard Thevenet and Belgium's Eddy Merckx. And like those champions, he used "sew-up" tires — where the tread is basically sewn around an inner tube, and then the whole thing is glued directly onto the rim.

"I joined a racing team, the Cleveland Wheelmen," he writes. The team traveled to cities from Detroit, Mich., to Buffalo, N.Y., to compete. "One year I got some black alphabet decals," he says, "and put CLEVELAND on the front of each of my fork blades."

Gill still lives in Cleveland. And for most of the past decade, he's ridden bikes almost exclusively for commuting. But, he says, "a few years ago I took up the habit of prowling Craigslist to find old bikes that awaken the joy that old Peugeot and a few other bikes had kindled in me."

Many of the bikes from that era have been resurfacing in the re-sale market, as people look for cheap and dependable bikes that will let them join in cycling's renewed popularity. Two conditions of the '70s helped create that phenomenon. First, the oil crisis prompted a boom in cycling. And because most bicycles were made of durable steel back then, many of them can be made road-ready today, with just a little work.

For Gill, a listing for two "high-end" Peugeot frames from the 1970s piqued his interest. That led him to visit Cleveland's Blazing Saddles Cyclery, a shop housed in a converted laundry building, in September.

When he looked at the two frames on the shop's counter, Gill says, he knew one of them was simply the wrong size. But the other frame was exactly his size — and it was the same color and model as his old racing bike. Looking at the bike's fork, leading down to its front axle, he could make out decals — letters, to be exact:

Those flaking decals on the front of each fork blade were the remains of of what I had put there almost 30 years earlier: black helvetica letters spelling out CLEVELAND.

This was my bicycle. Not just the same make, model, year, size, and color but the very same bike I had pedaled all those miles. Those Cleveland decals were proof as good as a notary stamp. 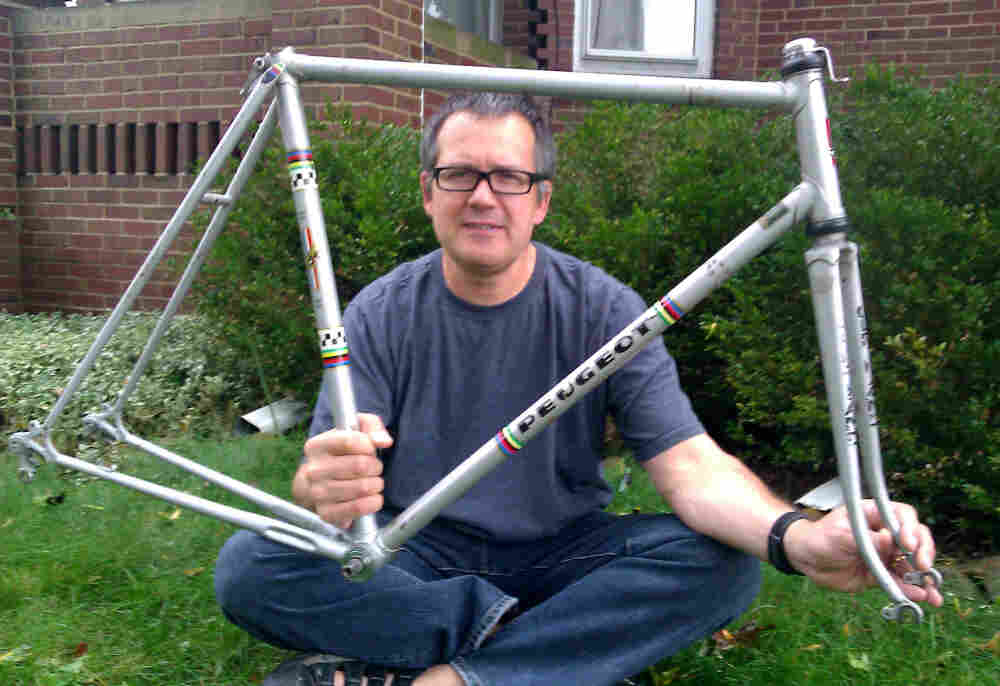 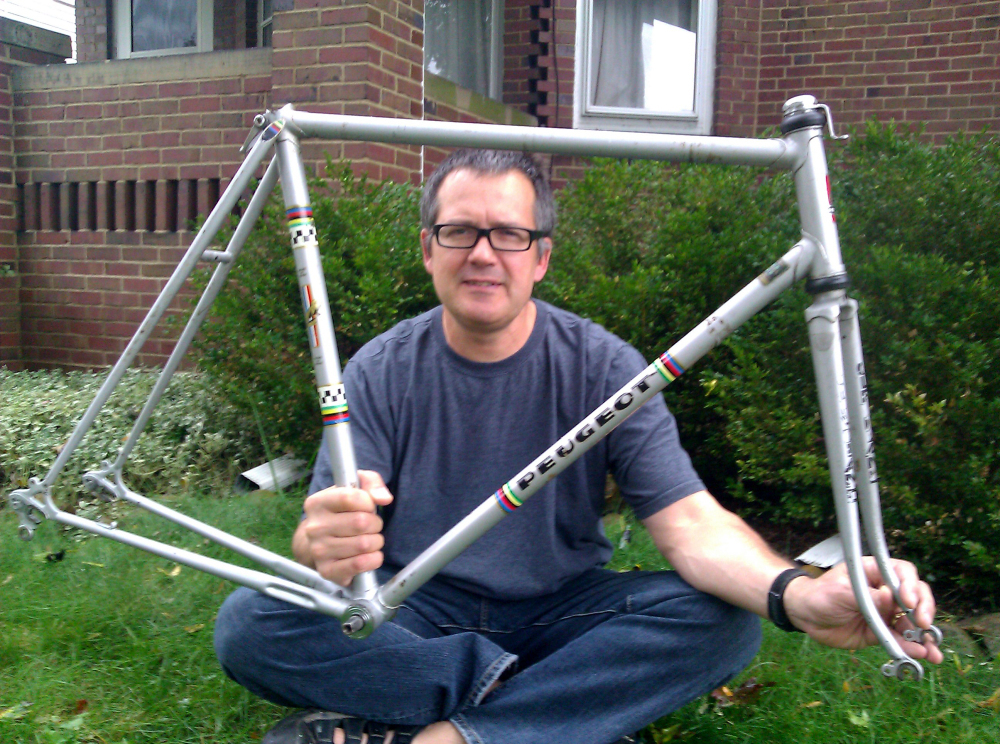 Explaining why he sold it in the first place, Gill said in an email, "I had bought a new fine racing bike — a Colnago Super, made in Italy. I was in college. Headed to graduate school. Needed the money. I think I sold it for $100."

Describing his find on his blog, Gill titled the post "My mid-life crisis rides an old French bike." And he says that when he finally found the bike, buying he Peugeot (again) was nearly automatic:

Since I sold this bike, Ronald Reagan completed his presidency. So did George H.W. Bush, Bill Clinton, and George W. Bush. Now Barack Obama is in the White House, and nearly 30 years after the last time I saw my bike — I had the chance to buy it back. I paid the asking price, without even an attempt to bargain down.

For people who have aged into their 30s and beyond, it's not unusual to look back at one's early 20s with tinges of regret — either for things we've lost, or perhaps just a yearning for creak-free joints and bottomless energy.

But it wasn't simply nostalgia that made Gill go looking for his old bike. Instead, it was the news that the bike he'd gotten after the Peugeot, the Colnago, had been utterly destroyed.

After riding it for years, Gill had given it away. And a few years later, he says, "the guy I gave it to left it locked on the street, where it got completely wrecked — violently bent around the pole it was locked to. I think the tragedy of that damage to a fine, handmade thing is what rekindled my interest in riding fast, and in those classic old racing bikes."

Describing his feelings for those bikes on his blog, Gill writes, "It's one thing simply to own a beautiful, hand crafted object, but it's quite another to ride it, feeling the way it transmits the road to your muscles, the way it responds when you jump."

I asked Gill if he's thinking about maybe restoring the Peugeot, and entering it in a masters race.

"I haven't raced in decades, but I did recently start pushing myself to ride faster, cycling exclusively for the joy of it," he says. "I don't expect to race again, but I do plan to take my Peugeot out on some long fast rides. Fast from the perspective of a middle aged guy who spends a lot of time at a desk."

For now, he's looking around for parts and components that would let him restore the bike. His list includes Maillard high-flange hubs, Mafac Competition brake levers, and Stronglight cranks. The Peugeot frame hangs in his basement.

"I'm working with a catalog I found online to identify specific makes and models for every little thing," he says. "If money were no object, I could do it faster. But I don't mind taking my time."

On Gill's blog, his readers are debating what he should do with the bike — many want him to keep the frame in its current condition, wearing its patina and chipped paint like a badge of honor. But he's leaning toward a new coat of paint — along with new decals.

Some of them will replicate the original Peugeot styling. Others will be more basic — thick, black letters that spell "CLEVELAND."

"I want it to look nice so that eventually my wife will let me hang it in the living room when I'm not riding it," he says.

And in terms of long-range plans, Gill says, "I have a plan to ride all the way around Lake Erie someday. Maybe I'll do that on the Peugeot."