Accessibility links
Strip-Search That Man, 'Scrabble' Player Demands : The Two-Way There were some heated moments at the World Scrabble Championships when a "G" went missing. Officials decided not to ask one competitor to denudate.

Tipping the board over and telling mom that "he's cheating!" wasn't an option, so:

Chollapat Itthi-Aree of Thailand demanded that officials at this past weekend's World Scrabble Championships in Warsaw strip and search his opponent, Ed Martin of England. Itthi-Aree thought Martin had hidden a letter "G" somewhere. 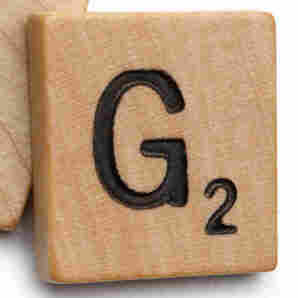 The Scrabble tile of the letter "G."

The Scrabble authorities, though, "decided against the strip search, saying there wasn't enough evidence of cheating," CBS News reports.

Martin went on to win their match by one point.

The eventual champion was New Zealand's Nigel Richards, the tournament's first two-time winner (his previous victory was in 2007). First prize was $20,000. Richards scored big — 96 points — with the word "omnified."

Though we were surprised to hear how serious Scrabble tournaments can be, we probably should not have been. As Sports Illustrated wrote back in 1995:

"Scrabble is actually a CUTTHROAT world where GUTS, GUiLe and GAMES MANSHIP are PUSHED TO THE LiMiT."

And there have been charges and countercharges over missing tiles before, as SI reported:

"Last June [1995], [Louis] Schecter, 43, the 37th-ranked player in the country, was in a match against Charlie Southwell in a tournament in Stamford, Conn. Suddenly, Southwell pointed out, a tile was missing. He called over the tournament director, who demanded that both players empty their pockets. 'I didn't like that,' says Schecter, a bookkeeper from Brooklyn. He refused. He was disqualified, and word spread like a line out of Damon Runyon: Did you hear? Louie palmed an E. ..."

We didn't realize how zealously some play the game.