Accessibility links
Posse Kills, Captures Escaped Animals; Monkey Still Loose : The Two-Way Around 50 or so lions, tigers, bears, wolves and other potentially dangerous animals that escaped from a Zanesville, Ohio, preserve have been killed. 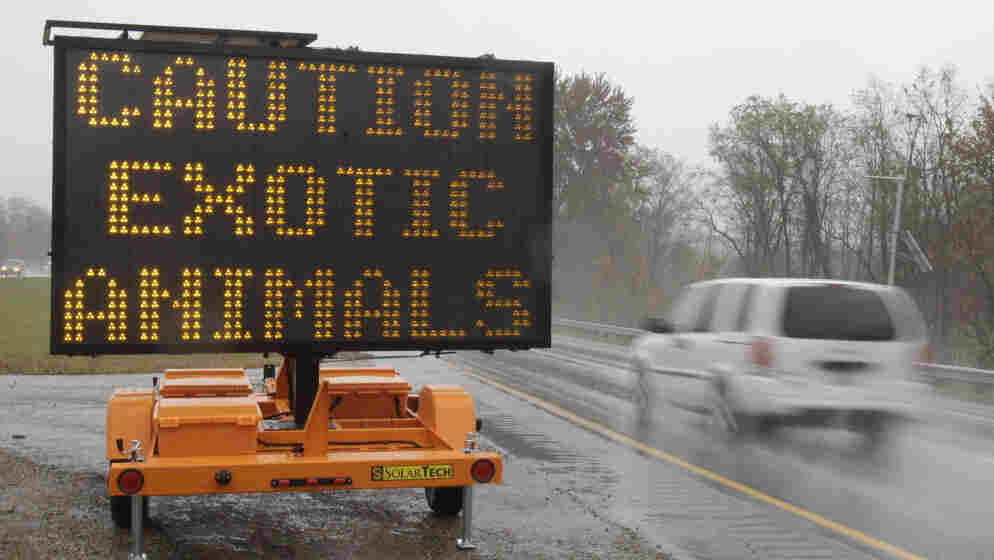 A sign warning motorists that exotic animals are on the loose rests on I-70 Wednesday, Oct. 19. 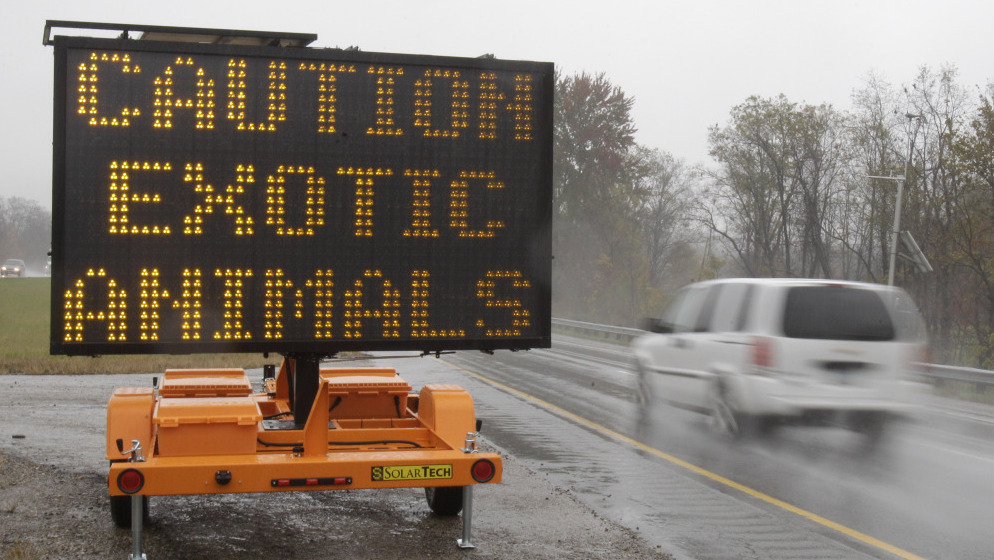 A sign warning motorists that exotic animals are on the loose rests on I-70 Wednesday, Oct. 19.

Armed deputies have found and killed nearly all the animals — including lions, tigers and bears — that escaped from a Zanesville, Ohio, private preserve on Tuesday, the local sheriff told reporters early this afternoon.

Investigators believe the preserve's owner, Terry Thompson, freed the 50-or-so animals and then killed himself. He was found dead at the scene.

Throughout the day, police hunted the animals because they said they posed a threat to public safety. At a press conference, Muskingum County Sheriff Matt Lutz said he felt there was no alternative — deputies do not carry tranquilizers, aren't trained to subdue animals with them and were faced with the prospect of dozens of dangerous animals getting into areas where people live.

As night fell, all but one of the 56 escaped animals had been captured or killed. A monkey was still at large and police managed to capture a grizzly bear, three leopards and two monkeys alive. They were taken to the Columbus Zoo and Aquarium.

Bishop tweeted the "worst part of the story" were those 18 Bengal tigers. "Jack Hanna of Columbus Zoo said there are only 1,400 in the world," he wrote.

We live-blogged the story throughout the day. Read below to see how it unfolded.

NBC4i.com and The Columbus Dispatch are reporting that the wolf has been killed. That means only the monkey remains at large.

The Columbus Dispatch reports Sheriff Matt Lutz said 56 exotic animals escaped. Of those 49 were killed. Authorities managed to capture six of them alive. A grizzly bear, three leopards and two monkeys were then taken to the Columbus Zoo and Aquarium.

As we reported earlier, Muskingum County Sheriff Matt Lutz says the only two animals on the loose are a monkey and a wolf. He just said at a news conference that animal control experts have advised his department not to try to capture the monkey, but to kill it as well. It is "highly likely that this animal is carrying Herpes B," the sheriff said. According to the Centers for Disease Control and Prevention, "infection with B virus is extremely rare in humans; however, when it does occur, the infection can result in severe neurologic impairment or fatal encephalomyelitis if the patient was not treated soon after exposure."

Update at 2:05 p.m. ET. Thompson Believed To Have Shot Himself:

Lutz also said that his deputies had been to the preserve more than 30 times in recent years in response to complaints from neighbors. And "every time we were out" there he worried about the animals getting loose. Thompson bought and kept the animals for himself, not for showing, Lutz said. As for the decision to kill the animals, Lutz repeated (as he's said at news conferences) that he felt there was no alternative — deputies do not carry tranquilizers, aren't trained to subdue animals with them and were faced with the prospect of dozens of dangerous animals getting into areas where people live.

More from Melissa's conversation with the sheriff is due on today's All Things Considered. Click here to find an NPR station that broadcasts or streams the show.

"I have the animals because I love them and am willing to do whatever I have to take care of them. I have seven veterinarians on call at any time ... I don't use animals for commerce, so I'm under no regulations like a zoo.

"But I make sure my animals aren't a threat to the community, either."

The Recorder has audio of two 911 calls to police posted here.

Muskingum County Sheriff Matt Lutz just told reporters that a bear and a mountain lion who had been missing have been killed. Only a monkey and a wolf are still thought to be alive and loose, he said, as NBC4i.com reports.

Authorities say "a mountain lion, grizzly bear and monkey [are] the only animals still running loose," The Associated Press says.

Update at 11 a.m. ET. More From The News Conference:

Columbus' NBC4i.com live-blogged the 10 a.m. ET news conference held by Sheriff Lutz. Among the things he reported is that though authorities believe Thompson killed himself, they have not found a suicide note.

According to NBC4i, Jack Hanna, director emeritus of the Columbus Zoo and Aquarium, said during the news conference that the biggest concern at this point is a mountain lion that has not been accounted for.

The Columbus Dispatch writes that:

"Thompson, 62, was released from federal prison just three weeks ago, after serving a one-year term. The Bureau of Alcohol, Tobacco, Firearms and Explosives had raided Thompson's Kopchak Road property in June 2008, seizing more than 100 guns. In April 2010, Thompson pleaded guilty in U.S. District Court in Columbus to two federal charges: possession of a machine gun and possession of short firearms without serial numbers.

"Under terms of his release, Thompson was confined to his home for a year.

"Thompson also was convicted in Muskingum County Municipal Court in 2005 of cruelty to animals, having an animal at large and two counts of rendering animal waste without a license. The charges stemmed from allegations that three cows and a bison had died on another property he owned, on Boggs Road in Perry Township, east of Zanesville."

Update at 10:40 a.m. ET: A short time ago, Sheriff Lutz said authorities believe they've killed about 43 animals, but that there may have been as many as 51 on the site, The Columbus Dispatch reports.

During a news conference broadcast on the cable news networks, he also confirmed that authorities do suspect that Thompson freed the 50 or so animals on his preserve and then killed himself.

Today, he said, a veterinarian working with authorities was able to get close enough to a 300-pound tiger to fire a tranquilizer dart at the animal. But the tiger "went crazy," Lutz said, and "our officers put it down."

The sheriff also said that the preserve had been the subject of "numerous complaints" from neighbors in recent years and that deputies had visited it many times. It had been "a huge problem for us for a lot of years," Lutz said.

According to the Dispatch, "Jack Hanna, director emeritus of the Columbus Zoo and Aquarium, defended the deputies who shot the animals, saying they did the right thing." Hanna was with Lutz at the news conference.

Update at 7:45 a.m. ET: Local Sheriff Matt Lutz just said on ABC's Good Morning America that about 35 of the exotic animals that escaped Tuesday from an Ohio preserve have been killed.

At least 25 of the estimated 48 lions, tigers, bears, wolves and other potentially dangerous animals that escaped from a Zanesville, Ohio, preserve on Tuesday had been killed by early this morning, The Columbus Dispatch reports.

The Dispatch adds that Muskingum County Sheriff's deputies were being assisted by a posse that includes troopers from the State Highway Patrol, "authorities from the Columbus Zoo and Aquarium and the Wilds, the state Division of Wildlife, the county Emergency Management Agency and township fire departments" as they hunt the animals.

It still isn't clear what happened at the preserve. As The Associated Press reports, Sheriff Matt Lutz said "his office started getting phone calls at about 5:30 p.m. Tuesday that wild animals were loose just west of Zanesville on a road that runs under Interstate 70. He said four deputies with assault rifles in a pickup truck went to the animal farm, where they found the owner, Terry Thompson, dead and all the animal cage doors open. He wouldn't say how Thompson died but said several aggressive animals were near his body when deputies arrived and had to be shot."

Today, according to the Dispatch, "Zanesville, West Muskingum and Maysville school districts, as well as Muskingum County Starlight School, all canceled classes ... to keep children inside. Lutz also recommends that residents remain inside today and call 911 if any wild animal is seen."

"This is a bad situation," the sheriff said.

WBNS-TV of Columbus has a video report. "Stay inside; protect your family," it begins.