Accessibility links
Out Of Wall Street Protest, An Unlikely Celebrity: 'Hipster Cop' : The Two-Way The community affairs detective has become an Internet sensation for his sharp choice in fashion. But some protesters are torn: Should they trust a man with their aesthetic sensibilities, but associated with a police department they've clashed with?

Out Of Wall Street Protest, An Unlikely Celebrity: 'Hipster Cop'

Out Of Wall Street Protest, An Unlikely Celebrity: 'Hipster Cop' 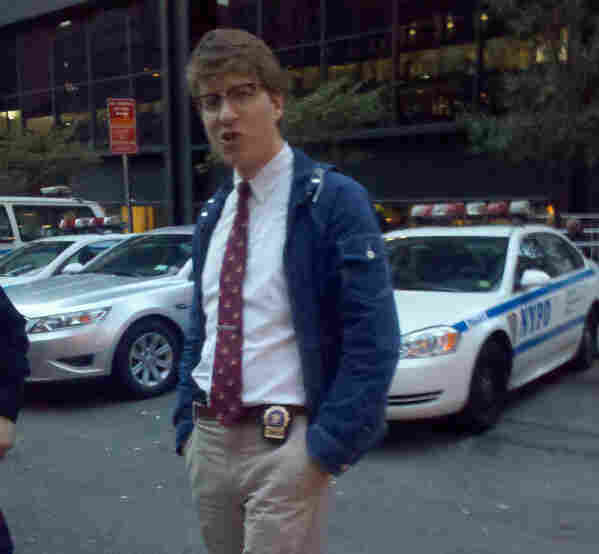 What is likely the first photographic evidence of "Hipster Cop." 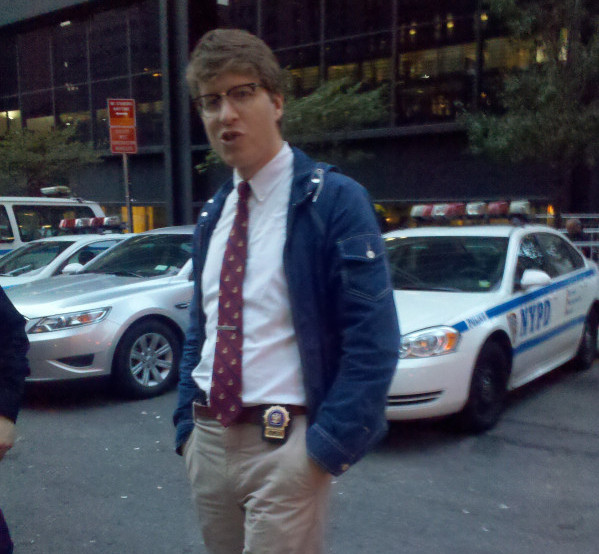 What is likely the first photographic evidence of "Hipster Cop."

We've covered the serious news out of the Occupy Wall Street movement today. But The Gray Lady has a story we just couldn't stay away from.

The New York Times has put an end to the mystery of Hipster Cop. If you're not a hipster, then you probably haven't heard about him, but he's become a fixture at the Occupy Wall Street protest in Zuccotti Park.

Hipster Cop is not an ordinary police officer: He stands out from the uniformed crowd because he wears skinny ties and skinny trousers and he hangs with Tom Morello and wears ironically retro grandpa sweaters.

It seems the first picture of Hipster Cop was tweeted on Oct. 10. And since then, the curiosity mounted. Like any credible Internet sensation, he got a lolcats-style picture proclaiming that he was "into pepper spray, before it was cool." And an Oct. 13 piece Gawker staff writer Adrian Chen posted to his Tumblr blog cemented his mystery:

When I met him, Hipster Cop was wearing a bright red Mister Rogers cardigan and a white button down with a clipped tie, grey wool slacks and spotless oxfords, a smirk on his face. He was the most sharply-dressed guy I had seen pretty much all week, and I work in Soho. Hipster Cop almost looked too well-dressed to be a Radiohead fan; like, maybe he only listened to LPs of obscure Japanese bands from the 80s. But I asked if he was bummed about Radiohead's no-show: "They're finished," he joked. "Nobody's going to listen to their music anymore."

Today, the mystery has unraveled. Hipster Cop is indeed a community affairs detective in the First Precinct named Rick Lee, a fact that had been established in the blogosphere when they matched him to a picture on the NYPD's website.

The Times has more from their exclusive interview with Hipster Cop:

-- Yes, he lives in Staten Island.

-- He listens to Radiohead and the Killers.

-- His suits are "hand-tailored by a friend who works for Ralph Lauren."

-- He's 45 and has worked for NYPD close to 20 years. His dad is a retired New York City firefighter.

-- When he was younger he had long hair.

Hipster Cop has also aroused suspicion among the protesters. Sure, he's in line with many of their aesthetic sensibilities and as he told the Times, he pays 39 percent in taxes so he has "a lot in common" with Occupy Wall Street. But some protesters asked, should he be trusted? The movement has, after all, had its clashes with NYPD.

The Sparrow Project reminded protesters in a blog post, "it is important to remember Hipster Cop is part of the process of intimidation, ridicule, and violence being levied against us."

They even put together a video of pictures so protesters could identify him and it ends with this warning: "Don't let appearances deceive you."

One more thing: Gothamist put together a small gallery of Hipster Cop's fashion.