Accessibility links
Gadhafi Is Dead, Tripoli Rejoices : The Two-Way The killing of the ousted Libyan leader is the climax of a months-long struggle to topple the dictator's regime. Photos and videos supposedly showing his body are beginning to surface.

The end has come for Col. Moammar Gadhafi, who ruled Libya for more than 40 years and over the decades became one of the world's most notorious dictators and sponsors of terrorism.

Earlier today, Libyan fighters took over Sirte, the hometown of the ousted leader.

And then there were unconfirmed reports that he had been captured. Just after 7 a.m. ET, Reuters reported that Gadhafi:

"Has been captured and wounded in both legs, National Transitional Council official Abdel Majid said on Thursday."

As the story developed, there were claims that Gadhafi had been killed. Al-Jazeera later reported that "Abdul Hakim Belhaj, a NTC military chief, has confirmed that Muammar Gaddafi has died of his wounds after being captured near Sirte."

And reporter Marine Olivesi (as we posted at 1:50 p.m. ET) says she has been to the home where Gadhafi's body is now lying. The former leader had been shot several times in the chest, she tells NPR.

Even if Gadhafi hadn't been captured, the fall of Sirte marks a key moment in the months-long war in Libya. Though the Gadhafi regime was effectively toppled over the summer, the former dictator and his supporters had reportedly been making a last stand in Sirte.

Earlier we passed along reports that said Saif al-Islam Gadhafi, Gadhafi's heir apparent, had been killed or was wounded and captured. It seems now that the British-educated son is not in custody.

That's what Libya's Interim Prime Minister Mahmoud Jibril told the Washington Post in an interview. The news was also confirmed by Mohammed Sayeh, a senior member of the National Transitional Council.

Sayeh told the BBC's Newsnight that Saif would "be captured very soon." "You can run but you can't hide," he said.

Multiple news outlets are reporting that a U.S. drone and a NATO warplane shot at Gadhafi's convoy as he was fleeing. NBC News reports that a Predator drone fired a Hellfire missile at the 15-car convoy:

According to the officials, who spoke on condition of anonymity, both the Predator and a NATO warplane launched missiles, striking several vehicles while the rest scattered. Gadhafi was in or near the motorcade, but apparently managed to make his way to a nearby drainage pipe, where he was captured by forces from Libya's National Transition Council from Misrata.

NBC bases its report on U.S. officials. Reuters spoke to NATO officials who said their planes hit two military vehicles but they could "not confirm that Gadhafi was a passenger."

Officials said they did not know if Gadhafi was wounded in the attacks.

In statement, NATO's Secretary General Anders Fogh Rasmussen hinted that NATO involvement in Libya was closer to its end. He said:

NATO and our partners have successfully implemented the historic mandate of the United Nations to protect the people of Libya. We will terminate our mission in coordination with the United Nations and the National Transitional Council. With the reported fall of Bani Walid and Sirte, that moment has now moved much closer.

The Guardian has been talking to Libyans across Tripoli about the death of Gadhafi. Here's a bit of what Mohamed Shawsh, a 26-year-old accountant had to say:

Today is the end of the years of the regime. It's a new phase when you start living in freedom. I feel this freedom since the 20th of August, when Tripoli was liberated from Gaddafi's regime. But today I'm still in shock. I still can't believe that he's really gone.

I do feel free. We have never had this feeling before. That's freedom. You don't feel the freedom until the day you can say what you thing and not be afraid of the consequences.

We're also monitoring social media sites and collecting reaction from the across the region.

"Nobody can tell if the [fatal] shot was from the rebel fighters or from his own security guard," Interim Prime Minister Mahmoud Jibril just told All Things Considered host Robert Siegel. He says there was crossfire as "freedom fighters" tried to take Gadhafi into custody. Some of what he told Robert doesn't line up with the reporting we passed along earlier from freelance journalist Marine Olivesi, who has seen Gadhafi's body. She said the former Libyan leader had been shot several times in the chest. Jibril said the fatal shot was to the head and that Gadhafi had also been hit in the arm.

Libya's 'Dark Shadow Of Tyranny Has Been Lifted'

Update at 1:50 p.m. ET. Eyewitness Who Has Seen Gadhafi's Body Says It Appears He Was Shot Several Times In The Chest:

Freelance journalist Marine Olivesi just told NPR's Melissa Block that she has been to the home in Misrata, Libya, where Gadhafi's body was taken and has seen the former leader's remains. "His body is laying on a mattress. ... He was injured in the chest" and it appears he had "several gun shots" in the chest, she said. Much more from their conversation is due to be on today's broadcast of All Things Considered.

As Reuters says, Gadhafi "called the rebels who rose up against his 42-years of one-man rule 'rats.' "

But the evidence as of this hour indicates that "in the end it was [Gadhafi] who was captured cowering in a drainage pipe full of rubbish and filth," the wire service says. Interviews in Sirte, according to Reuters, indicate that Gadhafi and his guards ran to some drainage pipes after their convoy was fired upon by NATO aircraft. And that it was in those pipes where the former Libyan leader was captured.

The news channel says it has confirmed the death of Saif al-Islam Gadhafi, one of the former leader's sons and once presumed to be the heir apparent in the regime. The news has not been confirmed by other news outlets. The Associated Press just reported that Saif is "wounded, in hospital."

Update at 12:47 p.m. ET. Video Showing Gadhafi Before His Death?

Al-Jazeera and al-Arabiya are pointing to short videos posted on YouTube that the networks say show the wounded Libyan leader, before he died, being manhandled by a group of men. It's not clear that the person in the clips is Gadhafi, however. The clearer version of the two clips is here. Fair warning: The content may be disturbing to some.

The White House says President Obama will be making a statement at 2 p.m. ET, from the Rose Garden of the White House.

CBS News had its cameras running for an interview with Secretary of State Hillary Rodham Clinton when she first got word that Gadhafi had been (it was thought at that moment) captured.

"Wow," said Clinton, who quickly noted that the report was "unconfirmed."

The news network's English channel has posted this video look at Gadhafi's life. 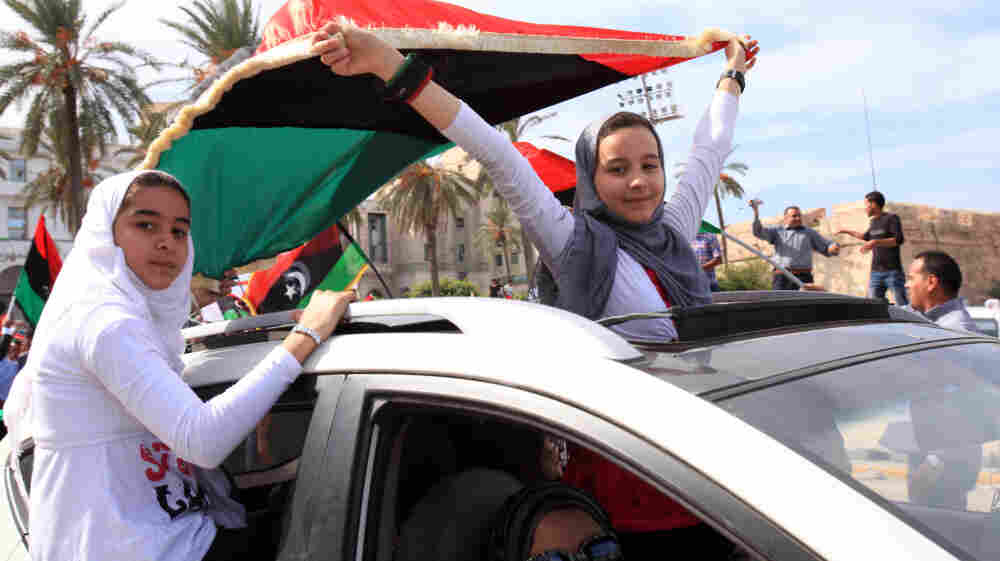 Libyan girls wave flags of the Transitional National Council as they ride through the streets of Tripoli following word of Moammar Gadhafi's death. 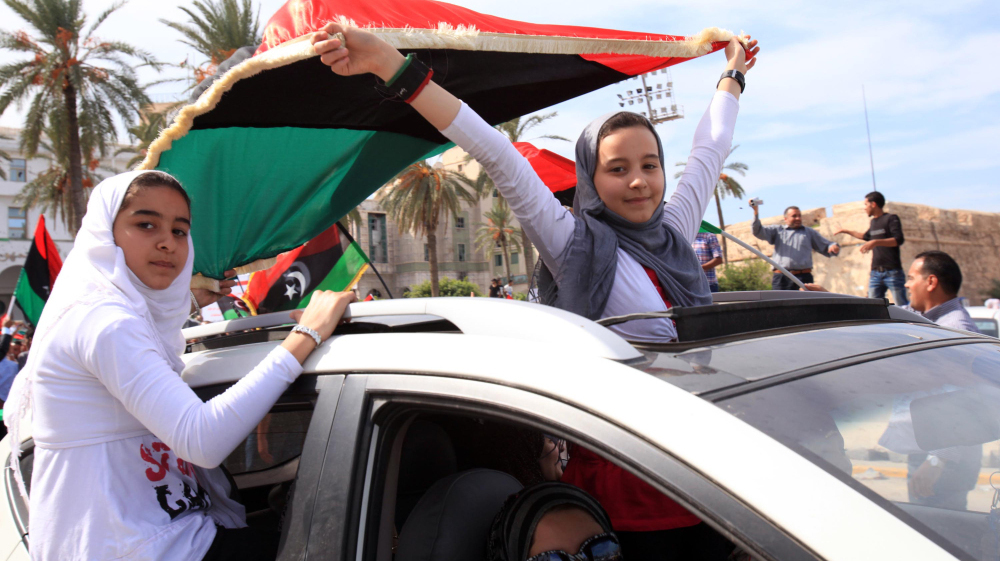 Libyan girls wave flags of the Transitional National Council as they ride through the streets of Tripoli following word of Moammar Gadhafi's death.

Al-Jazjeera and other networks are showing scenes of jubilation in the streets of Tripoli as Libyans celebrate the news of Gadhafi's death. NPR producer Grant Clark, who is in Tripoli, tells the Newscast desk that there are "wild celebrations across Tripoli. ... Wherever I've gone [there are] people dancing and flashing 'V' signs."

The BBC has a useful Gadhafi "family tree" posted here. Reuters reports that one of the former leaders sons, Mutassim, was also killed today. The whereabouts of Saif al-Islam, the son thought to be Gadhafi's heir apparent, are unknown. Several of Gadhafi's family members have fled to Algeria in recent months. Libya's new leaders have asked that they be expelled and sent back to face justice.

"Gadhafi ruled Libya with an iron fist for more than four decades," our colleague Jackie Northam reports in this look back at the dictator's life. "He was an unpredictable, often brutal leader with a grand vision of himself. In the end, he squandered his country's wealth and lost the support of his people."

The New York Times writes that Gadhafi, 69, "was an erratic, provocative dictator with the wardrobe and looks befitting an aging rock star. To thwart potential rivals at home, he sanctioned spasms of grisly violence and frequent bedlam, while on the world stage he sought to leverage his nation's immense oil wealth into an outsized personal role.

The Associated Press just moved this "alert": "US official: Libyan leaders have informed US that Gadhafi is dead." 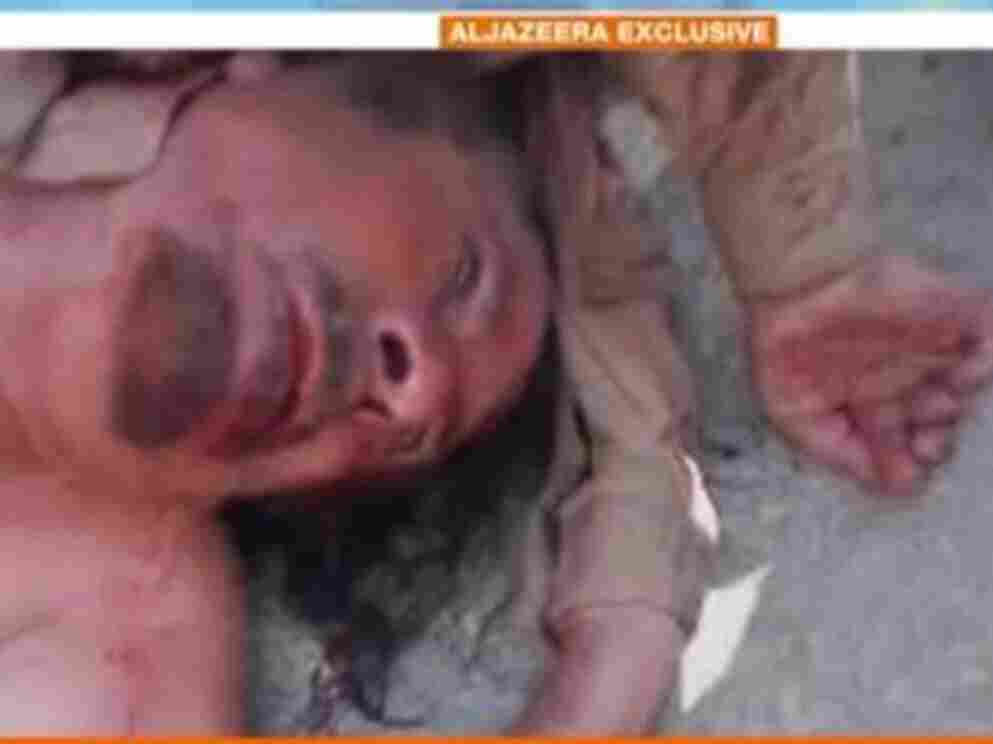 Al-Jazeera English says this image, from a video clip, is of the body of ousted Libyan leader Moammar Gadhafi. 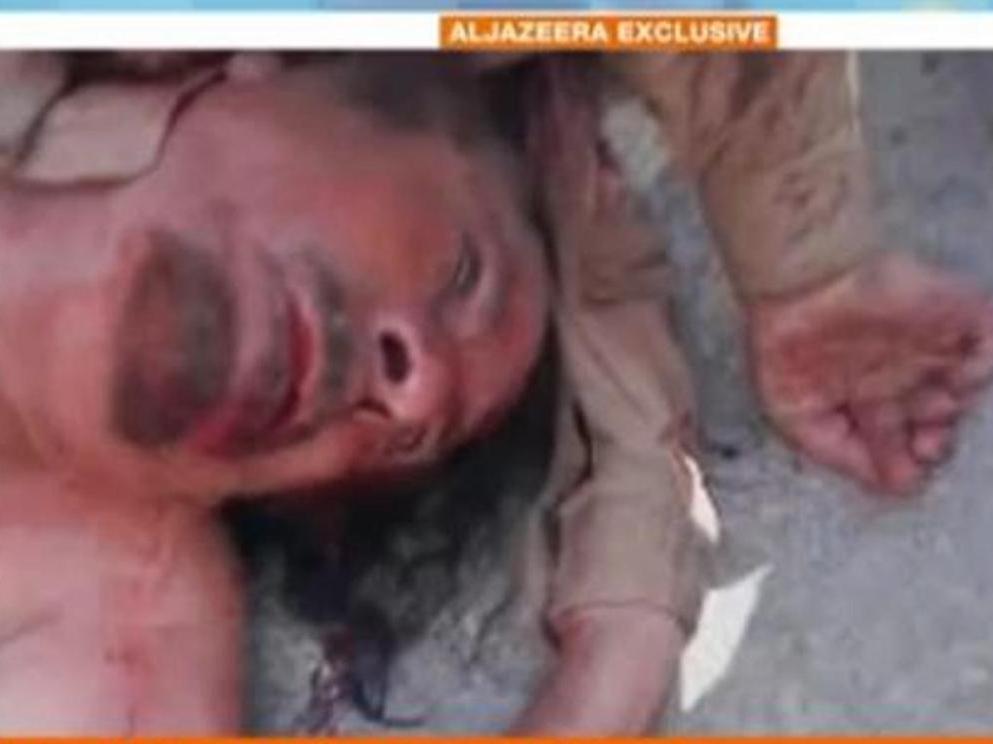 Al-Jazeera English says this image, from a video clip, is of the body of ousted Libyan leader Moammar Gadhafi.

Al-Jazeera English, which is streaming its coverage here, just broadcast a video clip that it says shows the ousted Libyan leader's body lying in a street and being kicked and rolled by other men. There hasn't yet been independent confirmation of the video's authenticity.

AFP/Getty Images has released a photo that it reports is of the scene where NTC fighters say Gadhafi was discovered. It appears to be a set of drainage pipes under a road. 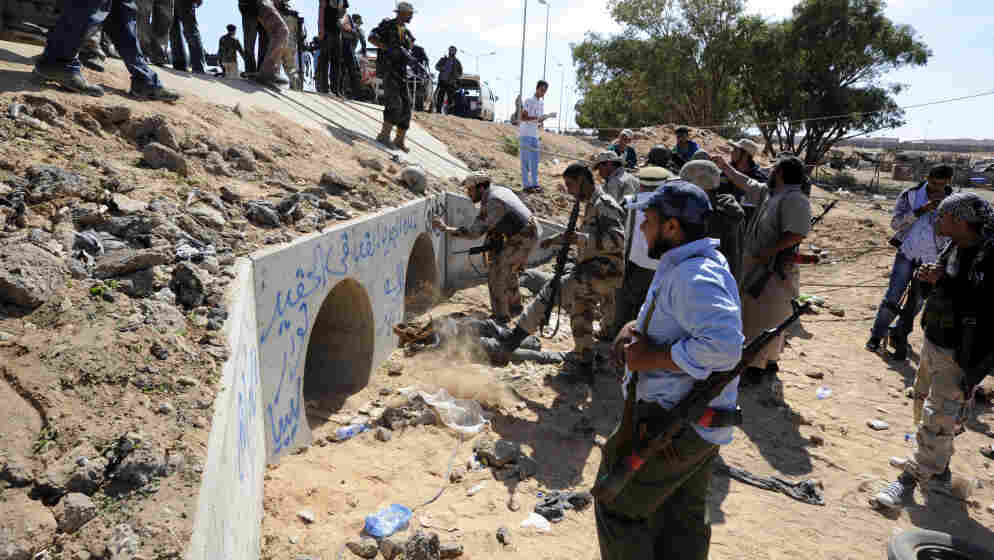 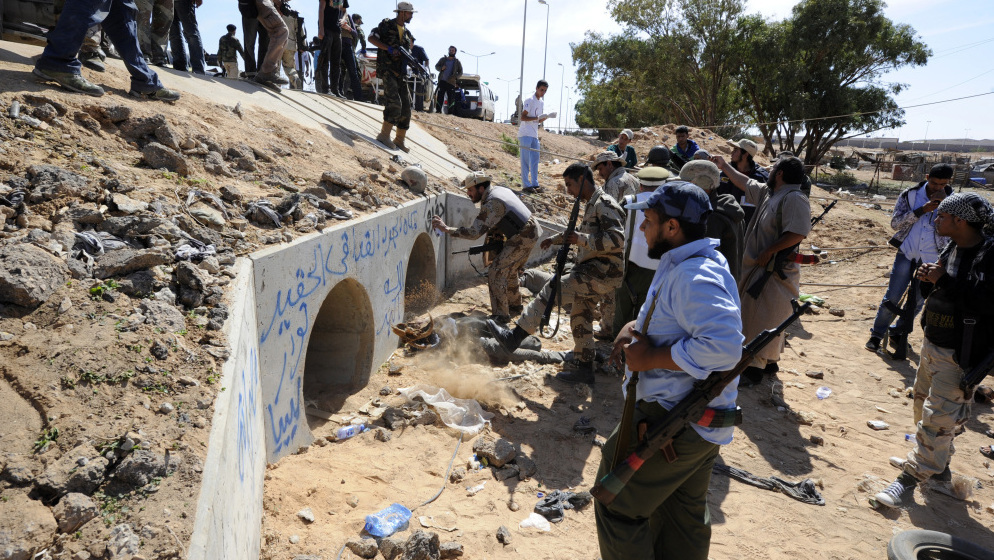 The al-Arabiya news network says it has "been granted permission to photograph Muammar Gaddafi's body." Note: There are still conflicting reports about Gadhafi's fate. Obviously, photos taken by journalists would help end any uncertainty.

Sky News has posted audio of NTC spokesman Abdullah Berrassali saying he has been assured by people at the scene in Sirte that Gadhafi is dead.

As The New York Times writes, "if confirmed, the capture or killing of Colonel Qaddafi — along with the fall of Surt — would allow [the country's new leaders] to declare the country liberated and in control of its borders, and to start a process that would lead to a general election for a national council within eight months."

The Guardian is among several news outlets that have posted a photo that purports to show a bloodied Gadhafi after his supposed capture. Note: There's no confirmation that the person in the image is actually the former Libyan leader.

The Times of London, meanwhile, says that "a pro-Gaddafi TV station/website is denying the reports of his capture or death."

Reuters is now saying that Gadhafi "died of wounds suffered in his capture near his hometown of Sirte on Thursday, a senior NTC military official said. National Transitional Council [also known as the Transitional National Council] official Abdel Majid Mlegta told Reuters earlier that Gaddafi was captured and wounded in both legs at dawn on Thursday as he tried to flee in a convoy which NATO warplanes attacked. 'He was also hit in his head,' the official said. 'There was a lot of firing against his group and he died.' "

Meanwhile: "AFP news agency quoted another NTC official, Mohamed Leith, as saying that Col Gaddafi had been captured in Sirte and was 'seriously wounded' but still breathing," the BBC reports. "A soldier who says he captured Muammar Gaddafi told the BBC the colonel had shouted: 'Don't shoot!' "

(Note: NPR follows Associated Press style on the spelling of Gadhafi's name and of the city of Sirte. Other news outlets use different spellings.)