Accessibility links
Chinese Toddler Dies, Days After Being Hit By Vans : The Two-Way In China, an "outpouring of grief" meets news that a toddler has died after being struck by two vans in the city of Foshan. The story became a sensation after a security camera's video revealed that more than a dozen passers-by had ignored the injured Wang Yue, 2, as she lay in the street.

Chinese Toddler Dies, Days After Being Hit By Vans And Ignored By Witnesses

Chinese Toddler Dies, Days After Being Hit By Vans And Ignored By Witnesses 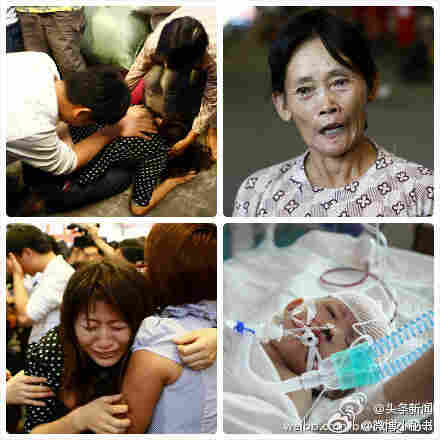 In China, an "outpouring of grief" is meeting the sad news that a toddler has died after being struck by two vans on a crowded street in the city of Foshan, according to state-run media.

The story became a national — and then international — sensation after a security camera's video revealed that more than a dozen passers-by had ignored the injured Wang Yue, 2, as she lay in the street, crying.

Only Chen Xianmei, 57, who was in the area collecting garbage, pulled the girl to safety and called for help. Police reportedly have the drivers of both vans in custody.

The girl was critically injured by the hit-and-run drivers in the southern Chinese city on Oct. 13. In the days that followed, she was declared brain-dead by physicians. She died of brain failure at the Guangzhou military hospital Friday.

Intensive care unit director Su Lei told reporters, "Her injuries were too severe and the treatment had no effect," the AP says.

Video of the incident was posted online — and viewers were shocked by both the graphical depiction of a horrible accident and witnesses' refusal to help the severely injured child. The Huffington Post has put the video online — but please be warned that it's disturbing.

According to the official Xinhua news agency:

The video shows 18 pedestrians and cyclists walking by the bleeding toddler without stopping to help. The 19th pedestrian, a migrant woman collecting trash, pulled her to the side of the street and alerted the girl's mother.

Internet users responded to the video in great number, criticizing the drivers and passersby, passing along messages calling for more "good Samaritans" and vowing to give a helping hand to anyone in need.

Many even donated money for Wang's medical treatment. Local media reported that her father received 270,100 yuan ($42,468 U.S.) as of Thursday. Some were offered by kindergarten students, while other donations were sent by Chinese people living in Australia and Thailand.

The episode sparked outrage in China, where many proclaimed a national crisis of character. And as CNN reports, many people sought to encourage and reward the woman who helped the toddler.

Hours after Wang Yue's death was announced Friday, more than 1.9 million posts were made on China's most popular social media site, Sina Weibo, about the incident. The BBC quotes several posters on the site; in one example, a user called Sima the Photographer, calls the toddler's death "a shame for all fellow countrymen that can never be washed away."

And China Daily has posted a running debate among its readers — some of whom ask what the girl's parents were doing when she wandered into danger (her mother was reportedly hanging laundry at the time). But others echo this sentiment: "We should try our best to help others who are in need. Moral is not law."