Accessibility links
Napoli, Holland Are Names To Remember As Rangers Even Series At 2-2 : The Two-Way Pitcher Derek Holland gave up just two hits over 8 1/3 innings and catcher Mike Napoli hit a three-run home run as the Texas Rangers beat the St. Louis Cardinals 4-0. Game five of the World Series is tonight.

Napoli, Holland Are Names To Remember As Rangers Even Series At 2-2

Napoli, Holland Are Names To Remember As Rangers Even Series At 2-2 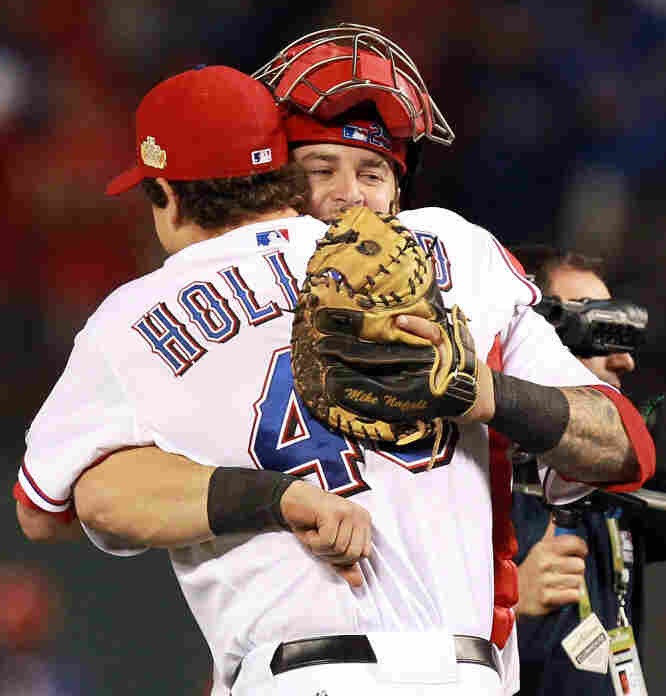 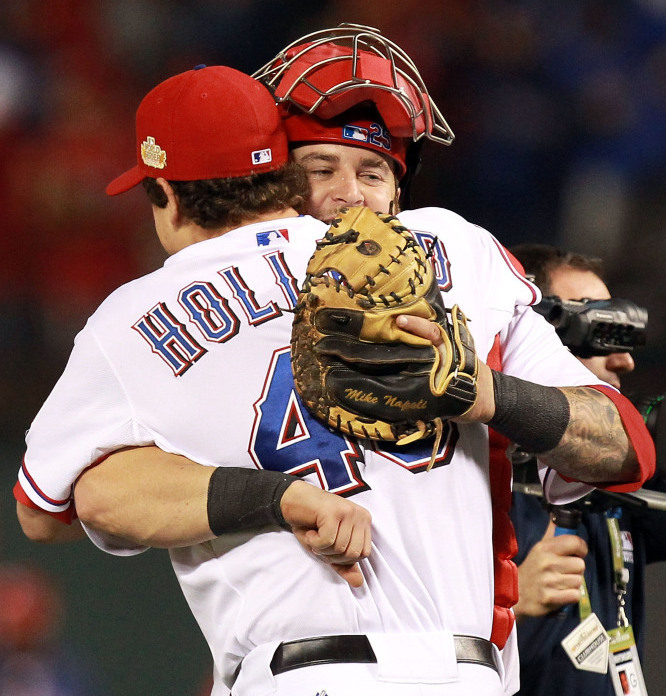 And the other name to remember from the game is Napoli — as in Rangers catcher Mike Napoli. His three-run homer in the sixth inning gave Texas a comfortable lead that Holland and relief pitcher Neftali Feliz were able to hold on to for the win.

As NPR's Mike Pesca reported on Morning Edition, "Rangers fans were screaming" Napoli's name as the slugging catcher came to bat — and went wild after he hit the first pitch into the stands for his home run.

Saturday night's star — the Cardinals' Albert Pujols — came to the plate with one out and two men on base in the top of the 9th. But he flied out to center field. Feliz then struck out the Cardinals' Matt Holliday to end the game. The Cardinals ended up with just those two hits. The Rangers had six. (Box score and inning-by-inning play-by-play is here.)

Some other notes from the game:

-- As the Dallas Morning News says, Holland's terrific pitching performance pretty much erases the memory of his "13-pitch washout in last year's World Series," when the San Francisco Giants beat the Rangers 9-0 in Game 2 of their matchup.

-- Holland, "clearly wanted to pitch a complete game," the News adds, "which would have made him the first American Leaguer to do so in a World Series since Minnesota's Jack Morris in 1991. But after Holland walked Rafael Furcal with one out in the ninth, manager Ron Washington called for Neftali Feliz to close the game.

"He was begging,' Washington said after the game. "I just told him, 'If you want to stay out here, get on your knees.' He walked off the field."

-- The Cardinals' dramatic change in fortune from Saturday, when the team scored 16 runs, "matched a World Series record" for largest drop in run production from one game to the next, according to MLB.com:

"The 16-run falloff matched the 1938 Yankees, who won Game 2 of that World Series, 18-4, at the Polo Grounds against the New York Giants, and Game 3, 2-1, across the river in the Bronx at the original Yankee Stadium."

Game five is tonight, again in Arlington, Texas. Fox is the TV broadcaster and it starts at 8 p.m. ET.