Accessibility links
Comeback Cardinals Win World Series : The Two-Way The team that in late summer didn't look like it would even make the playoffs came from behind again to defeat the Texas Rangers 6-2 in Game 7. For the Cardinals, it's the team's 11th World Series title. Texas is still looking for its first. 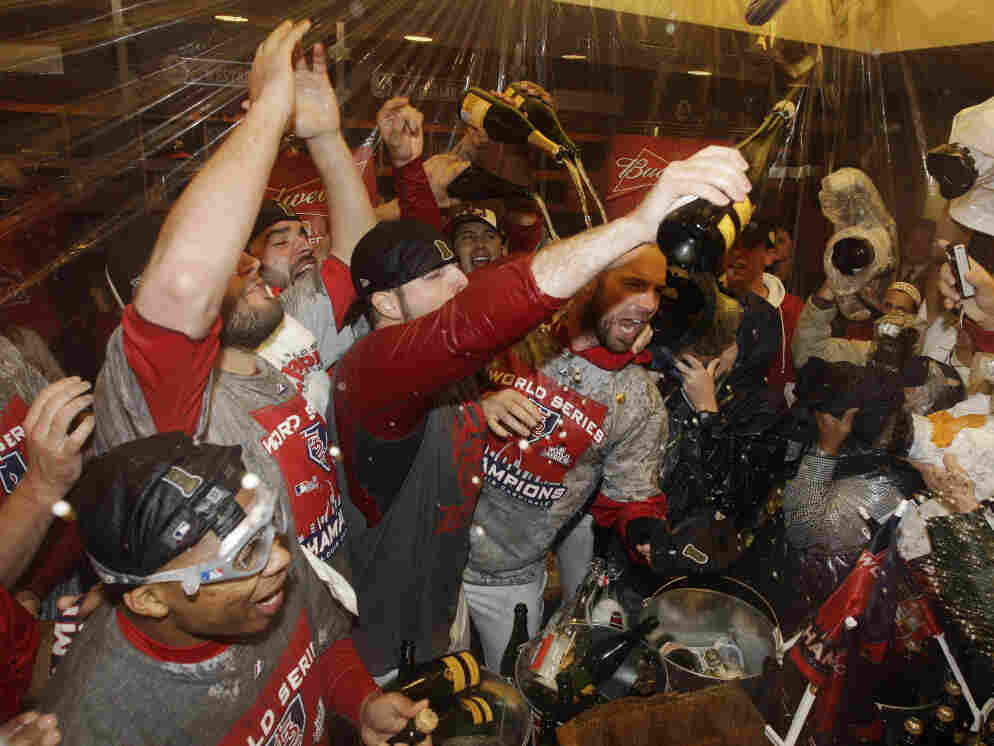 Celebration: The St. Louis Cardinals spray Champagne after Game 7 of baseball's World Series against the Texas Rangers in St. Louis. 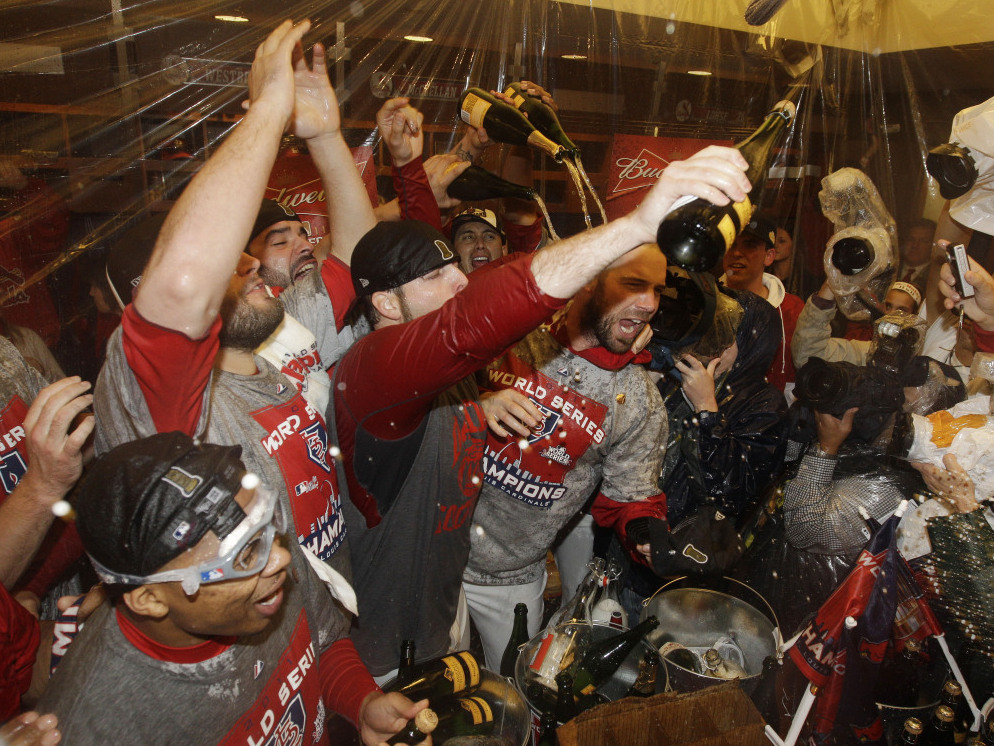 Celebration: The St. Louis Cardinals spray Champagne after Game 7 of baseball's World Series against the Texas Rangers in St. Louis.

A World Series that saw plenty of drama, some history and a bit of the bizarre ended Friday night with the St. Louis Cardinals defeating the Texas Rangers by a score of 6-2 in the deciding Game 7.

For the National League champion Cardinals, it's the team's 11th World Series title. They got No. 11 in a year when for much of the season it looked like they wouldn't even be in the playoffs — the team was 10 1/2 games behind in the race for the National League's wildcard slot as recently as August.

Texas, which was also in last year's Series, has yet to win one.

The Cards were led again by third baseman David Freese. His two-run double in the bottom of the first inning erased a 2-0 lead the Rangers had jumped out to in the top of the inning.

Freese was named Series MVP, but not just for his play on Friday. He had already cemented his place in St. Louis and World Series sports lore with his performance in Game 6 on Thursday. He sent that game into extra innings with a triple in the 9th inning that scored two runs — at a moment when Texas had been one strike away from its first championship. Then in the 11th, Freese hit the game-winning home run.

As for Friday's game, here are a few other keys to the Cardinals' win:

-- The Cardinals' Chris Carpenter, pitching on three days' rest instead of his usual four, shut down the Rangers after the first inning. He pitched into the 7th and gave up only six hits and no more runs.

-- After Carpenter left the game, the Cardinals' four relievers gave up no hits.

-- In the third inning, Cardinals left fielder Allen Craig hit his third home run of the Series to put St. Louis ahead.

Now that it's over, here's a quick recap of the highlights of what's already being called one of the best Fall Classics ever:

-- Game 1, First Inning; The Dive: Carpenter ran to cover the bag at first base, and had to dive to the ground to get the ball that had been tossed his way by first baseman Albert Pujols. "As his long frame hit the ground he tagged the base with his glove hand, at the same time pulling his pitching hand away to protect it from the batter's oncoming cleats," NPR's Tom Goldman said afterward. "How cool to see a pitcher getting dirty."

The play, Tom added, "served notice that the game, perhaps the Series, is going to be a diving for every out, clawing for every run affair."

-- Game 3, The "Greatest Night Ever": Cardinals first baseman Albert Pujols bashed three home runs. That tied the record for a single World Series game. And he got five hits total and batted in six runs. His team's manager, Tony LaRussa, called it "the greatest night in World Series history." Interestingly, Pujols would get just one other hit the entire Series, in Game 6.

-- Game 4; "NAPOLI! NAPOLI! NAPOLI!": If the Rangers had ended up winning the Series, the MVP might have been Texas catcher Mike Napoli. His three-run homer in the game put the team on its way to a 4-0 victory and had fans in Texas chanting his name.

-- Game 5; The Bizarre: The other thing that would have happened if Texas had won Game 7 is more talk about something that has been discussed, and discussed and discussed some more — the Cardinals' huge screwup in Game 5.

As we wrote the next day:

In the 8th inning when the score was tied at 2, Napoli came to bat. Three of his teammates were on base.

Napoli is a right-handed batter. The Cardinals pitcher at the moment was Marc Rzepczynski, a lefty who has a pretty bad record against right-handed batters. So the logical thing for LaRussa to do, as everyone watching knew, was to bring in Cardinals closer Jason Motte to pitch. He's a righty who specializes in getting guys like Napoli out.

But Motte didn't leave the bullpen for the mound.

It turns out that LaRussa had called the bullpen — twice — to say he wanted Motte to be ready to go in. But bullpen coach Derek Lilliquist misheard. So Motte never got ready. And Napoli slapped a double. Two runs scored. The Rangers won.

-- The Delay: Game 6 was supposed to be played on Wednesday, but got rained out and bumped to Thursday. That meant a Game 7, if necessary, would be played Friday — allowing Carpenter, the Cardinals' best pitcher, to take the mound. But would he be effective on just three days' rest? Turns out he was. So Mother Nature, some will say, played a part in the Cardinals' victory.

-- Game 6; Freese's Magic Night: As we said, not only did Freese put the game into extra innings when all Texas needed was one more strike to be World Champions, he then came back to win the game for St. Louis.

And wouldn't you know it? He grew up in a St. Louis suburb. Sounds like something from the movies.

That wraps up this year's Series. One for the ages? Feel free to debate in the comments thread.