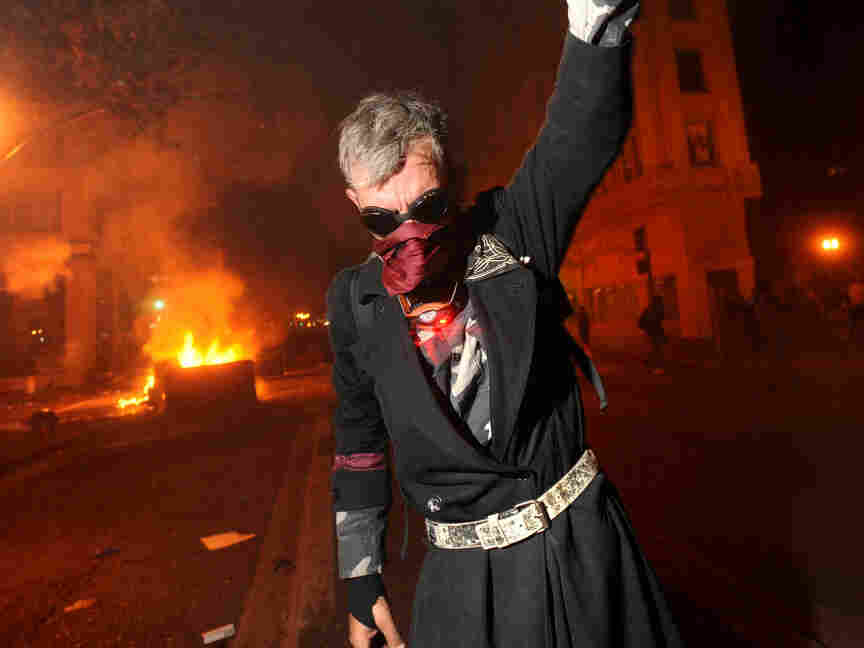 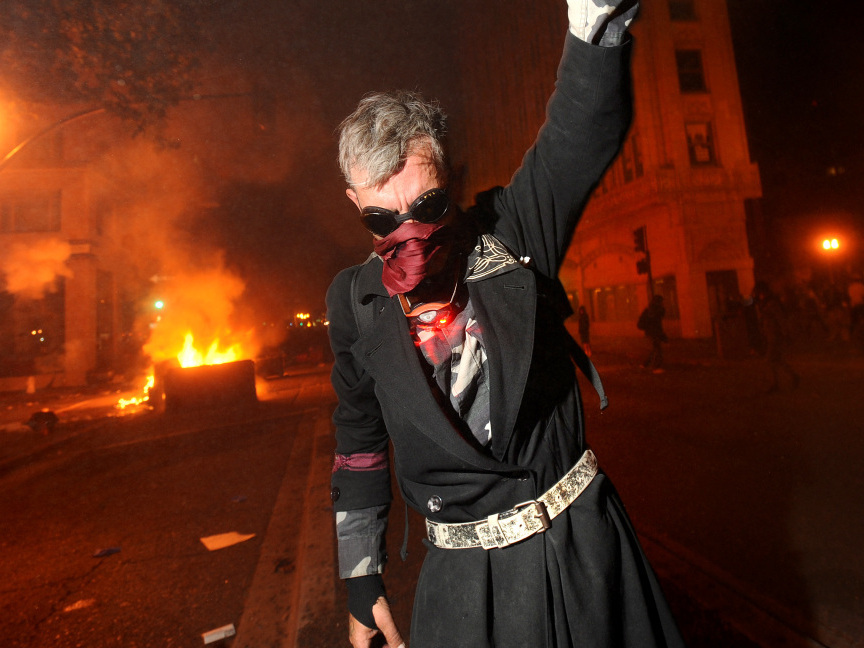 There's quiet now in the streets of Oakland, the local Tribune reports.

But what began as a "mostly peaceful" general strike that "drew thousands Wednesday for rallies and marches ... turned chaotic early Thursday after protesters took over a vacant building and police moved in, firing tear gas and flashbang grenades."

The newspaper, which was live-blogging as things happened, reports that as of 2 a.m. local time, "interim police chief Howard Jordan [said] between 30 and 40 people [had] been arrested in downtown Oakland, although he could not provide an exact number."

There were some injuries, the Tribune reports, including a man who protesters said had been "shot in the knee with a rubber bullet and gassed."

It wasn't until around 2:35 a.m. local time that the "crowd's energy [appeared to be] waning." Around 2:50 a.m., as riot police were beginning to disperse, instead of confrontations there was a demonstrator playing "Blitzkrieg Bop on a mandolin."

Protesters managed to force Oakland's busy port to shut down its operations.

The Associated Press says that Oakland protesters inspired by the Occupy Wall Street movement "declared victory after thousands of demonstrators shut down one of the nation's busiest shipping ports late Wednesday, escalating a movement whose tactics had largely been limited to marches, rallies and tent encampments since it began in September. ... The nearly five-hour protest at the Port of Oakland, the nation's fifth-busiest shipping port, was intended to highlight a daylong 'general strike' in the city, which prompted solidarity rallies in New York, Los Angeles and other cities across the nation."

According to The San Francisco Chronicle, "as many as 7,000 people, by police estimates, clogged the main port entrance on Middle Harbor Road and seven other gates as the sun went down, chanting slogans and halting all truck traffic going in or out. 'Whose port? Our port!' many yelled, while dozens climbed on top of the idled trucks and waved signs."

Our colleagues at KQED add that "hundreds of teachers, nurses and city workers took the day off to join in the day of protests. And a diverse array of others including school children took part in a series of demonstrations that began this morning, focused on a host of issues ranging from income inequality to police brutality."

The Tribune reports that "Occupy protesters [are] back at the Port of Oakland this morning, attempting to block trucks from entering." And it writes that:

"The scene was tense earlier at the port entrance at Adeline and 3rd streets, where truckers have faced off with about a dozen protesters who erected a chain-link fence across four lanes of traffic and reinforced it with Dumpsters to keep truckers and port employees out.

"One driver ran through the blockade and said he would run down the protesters. In response, a female protester yelled 'You are trying to hurt us over your job? For money? Really?' "

The Associated Press says protesters have focused on the port because they want to stop the "flow of capital."