Accessibility links
Daughter Beaten By Dad Who's A Texas Judge: It Happened Regularly : The Two-Way Hillary Adams' video of the beating has gone viral on the Web. Judge William Adams says he doesn't think he did anything wrong. She says he needs help and rehabilitation.

Daughter Beaten By Dad Who's A Texas Judge: It Happened Regularly

Daughter Beaten By Dad Who's A Texas Judge: It Happened Regularly 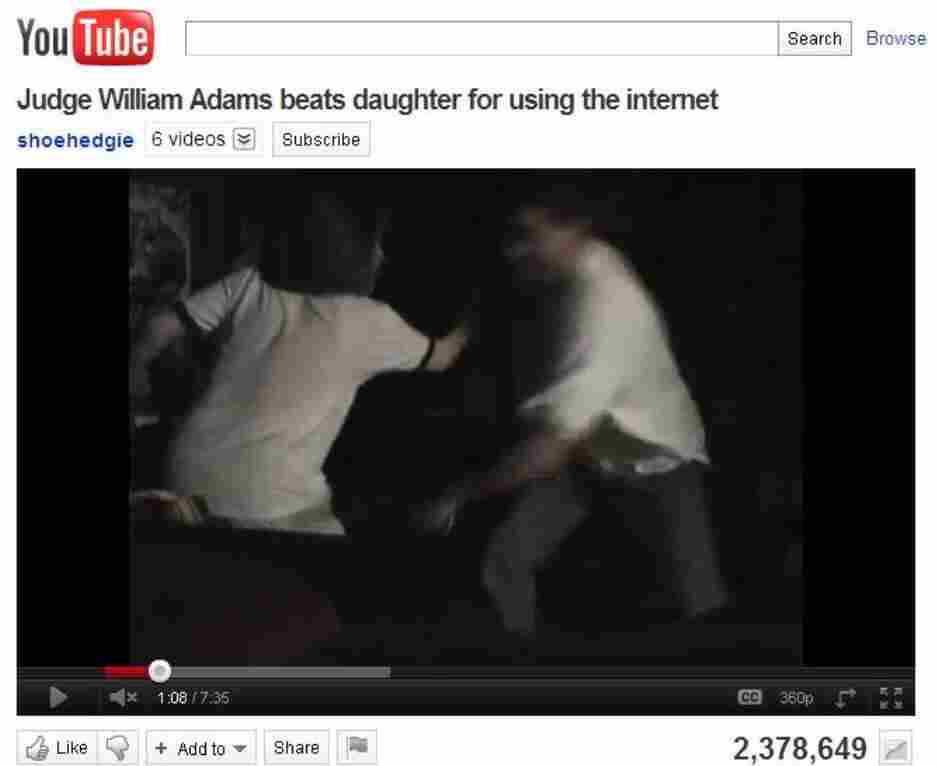 Hillary Adams (left) as her father was striking her with a belt. She set up a video camera to record what she says was one of many such beatings. YouTube.com (warning, video is graphic) hide caption 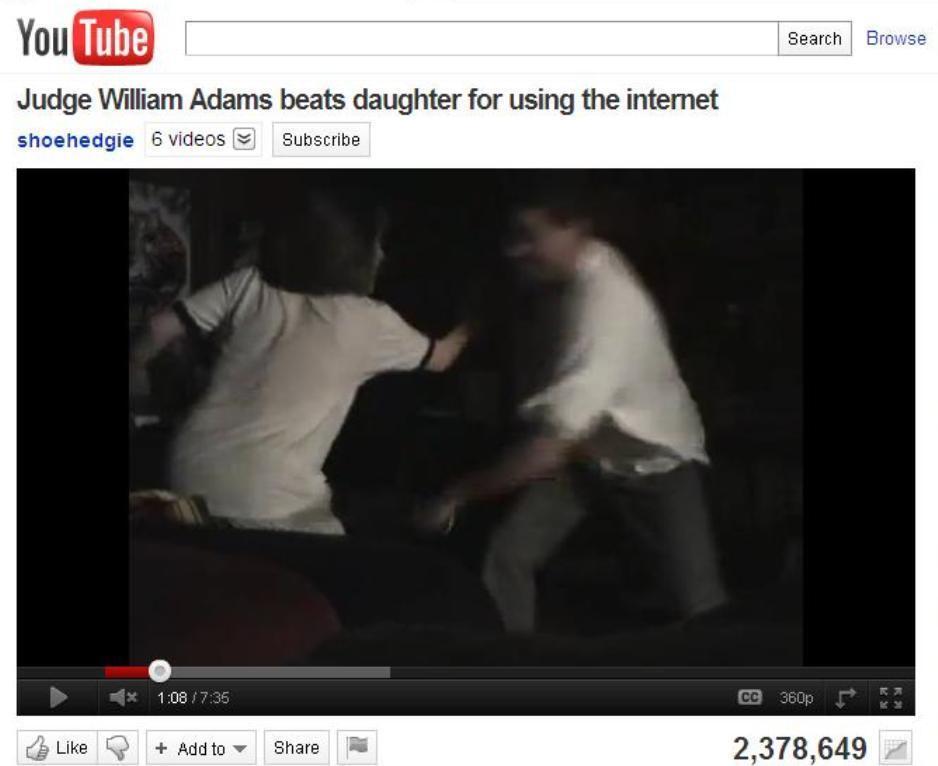 Hillary Adams (left) as her father was striking her with a belt. She set up a video camera to record what she says was one of many such beatings.

Hillary Adams, who videotaped her father beating her in 2004 and released it to the world last week because she believes he should not be serving as a judge in Texas, said this morning that such punishments happened regularly and that she believes her father "needs help and rehabilitation."

For his part, Judge William Adams says that "in my mind I haven't done anything wrong. ... She wasn't hurt, it was a long time ago" and she was just "being disciplined."

The video, which has been viewed nearly 2 million times since now-23-year-old Hillary Adams put it on YouTube last week, will be difficult for many to watch. William Adams, angry about his then-teenage daughter's downloading of files from the Internet, uses a belt to beat her legs and backside. He shouts and swears. Hillary screams and cries. So we caution those who might not want to see it to think first before clicking on this link.

On NBC-TV's The Today Show this morning, Hillary and her mother Hallie (who took part in the beating but has since divorced her husband and says she was "brainwashed and controlled" by him during their marriage) talked about what life was like with the judge and why Hillary waited until now to post the video:

-- "It did happen regularly," Hillary said of being beaten. And on the day when she set up the video camera, "I could tell ... that things were escalating again."

-- "I waited 7 years because back then I was still a minor and living under his roof," Hillary said.

-- And this year, she added, "I told him I had the video and he didn't seem to think anything of it and basically dared me to post it."

-- Hallie Adams said her former husband was addicted to violence.

William Adams, an Aransas County (Texas) Court-at-Law judge, is now "the subject of a police investigation," The Associated Press reports. He offered his defense of his actions during a short interview with Corpus Christi TV station KZTV. At one point he says the beating "looks worse than it is."

Judge William Adams issued a three-page statement through his lawyer in which questions his daughter's motive for uploading the video to Youtube. The Corpus Christi Caller Times obtained a copy of the statement from attorney William Dudley. The paper reports:

"Hillary warned her father if he reduced her financial support and took away her Mercedes automobile, which her father had provided, he would live to regret it," Dudley said. "The post was then uploaded."

The lawyer also suggested Hillary Adams played up her disability, a form of cerebral palsy, to gain public sympathy, when in reality she is a "highly functional adult."

And he doubted whether Hillary Adams had considered her younger sister before going public with the family's turmoil, "subjecting the entire family to worldwide microscopic scrutiny and permanent consequences," Dudley said.

In the description of her video, Hillary Adams says she "has had ataxic cerebral palsy from birth" and that because of it she has "a passion for technology."

According to the Centers for Disease Control and Prevention:

Correction at 3:50 p.m. ET: Earlier, we had the mother's first name wrong. We've corrected it above. Her first name is Hallie, not Holly.

Update at 1:25 p.m. ET. About The County Court-at-Law and Judge Adams.

TexasCounties4U.org, a website from the Texas Association of Counties and the V.G. Young Institute of County Government, says that County Courts at Law:

-- "Have general, civil, criminal or specialized jurisdiction [that] vary significantly from county to county."

-- "The judge must be a licensed attorney practicing in Texas for at least four years. Judges are elected countywide for a four-year term."

-- "The judge can issue writs of injunction, mandamus, attachment, garnishment, sequestration, and habeas corpus in cases where the offense charged is within the jurisdiction of the court. The judge also can punish for contempt, and has all other powers and duties of the county judge."

According to The Associated Press, Adams "was elected in 2001 and has dealt with at least 349 family law cases in the past year alone, nearly 50 of which involved state caseworkers seeking to determine whether parents were fit to raise their children.

The Texas State Commission on Judicial Conduct said in a statement released today that it has "commenced an investigation into the incident."

The commission also said it "has been flooded with telephone calls, faxes, and emails from concerned citizens, public officials, and others, calling for an investigation into the videotaped incident."