Accessibility links
Scientists Unveil Fossil Of 'Saber-Toothed Squirrel' That Lived Among Dinos : The Two-Way The animal is reminiscent of Scrat, the fictional character from the film Ice Age, but the find is important scientifically because it closes a 60-million-year gap in the mammalian fossil record of South America.

Scientists Unveil Fossil Of 'Saber-Toothed Squirrel' That Lived Among Dinos

Scientists Unveil Fossil Of 'Saber-Toothed Squirrel' That Lived Among Dinos 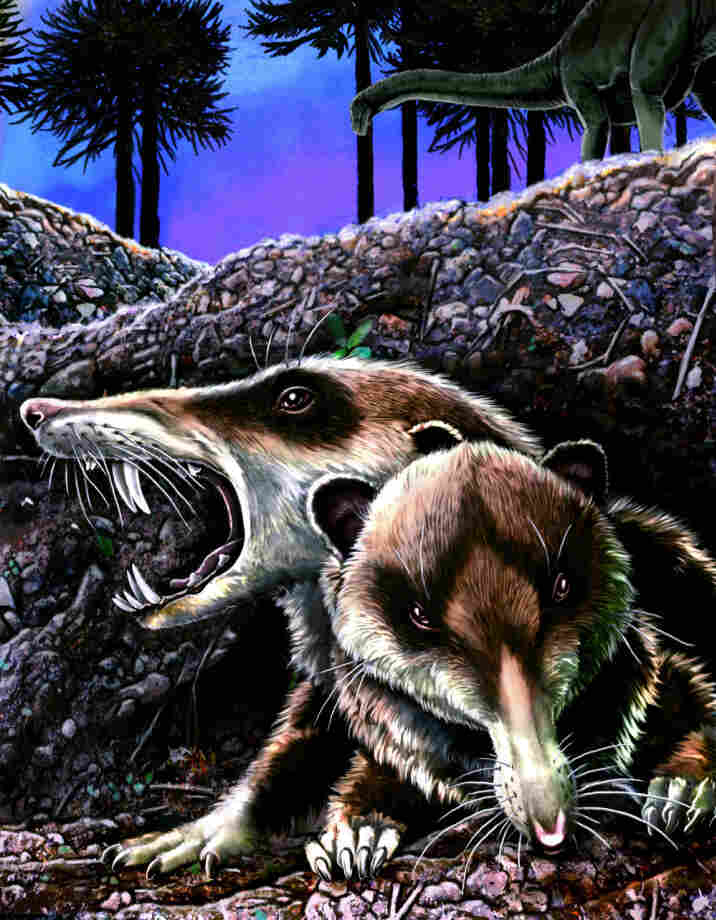 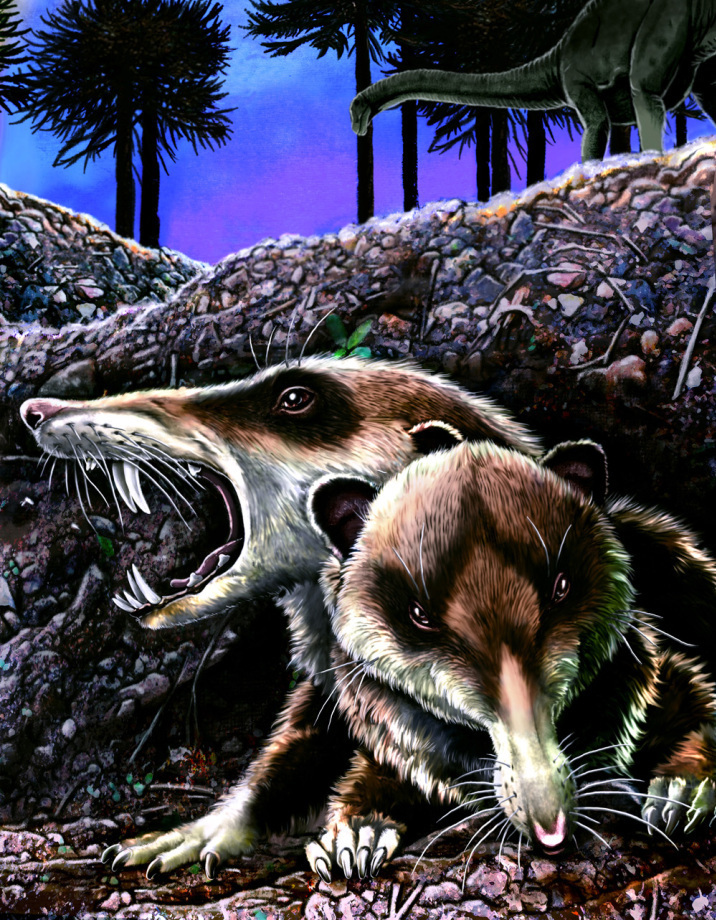 Reconstruction of Cronopio dentiacutus in its native environment at La Buitrera locality, Patagonia, Argentina, during the early Late Cretaceous (approximately 94 Million years ago).

Imagine a critter about the size of a squirrel. Imagine it with big eyes and a long snout. Now imagine it with canine fangs about one-fifth the length of its head. That's the kind of a mammal that scientists said today was walking among dinosaurs more than 100 million years ago.

Scientists found the fossils in Argentina and the find is significant because scientists say it closes a 60-million-year gap in what they knew about mammals in South America during the late Cretaceous period.

Scientists, which detail their find in today's issue of Nature, also found the animal's skull. That's highly unusual but fortunate because it gave them the ability to work out the biology of the animal.

The little creature was probably less than 6 inches (15 cms) long and shared similar characteristics with the saber-toothed squirrel in the "Ice Age" movies. But Cronopio likely ate insects, not the nuts that drive the animated character "Scrat" so crazy, and was a dryolestoid, an extinct group more like today's marsupials than squirrels, the scientists said.

"During the age of the dinosaurs, no mammal was bigger than a mouse, and they could do what they wanted, but under ground or at night — out of sight of the dinosaurs," said [Sebastian Apesteguia, one of the study's author and] a researcher at Maimonides University in Buenos Aires.

"Such discoveries of remarkably complete Mesozoic fossils always represent giant steps" in mammalian paleontology, [the scientists] added in a commentary in Nature. "In fact, one reasonably preserved Mesozoic mammalian skull in a critical stratigraphic and geographic position can be more relevant to our understanding of mammalian evolution and biogeography than hundreds of isolated teeth — even if teeth are the most common (and sometimes the only) remains" paleontologists work with.

Guillermo Rougier, one of the researchers behind the study, told the Christian Science Monitor that this find just confirms how diverse mammals of the period were. And that Scrat comparison also proves an important point.

"The comparison with Scrat is superficial, but it just goes to show how diverse ancient mammals are, that we can just imagine some bizarre critter and later find something just like it," Rougier told the Monitor.

h/t: NPR's Rob Schaefer, who tipped us off to the story.