Accessibility links
Oregon Lawn-Chair Balloonist Will Take His Show To Baghdad : The Two-Way Along with an Iraqi, Kent Couch plans to reach a 25,000-foot elevation and spend more than 24 hours in the air. The flight will take off from Baghdad's Green Zone. 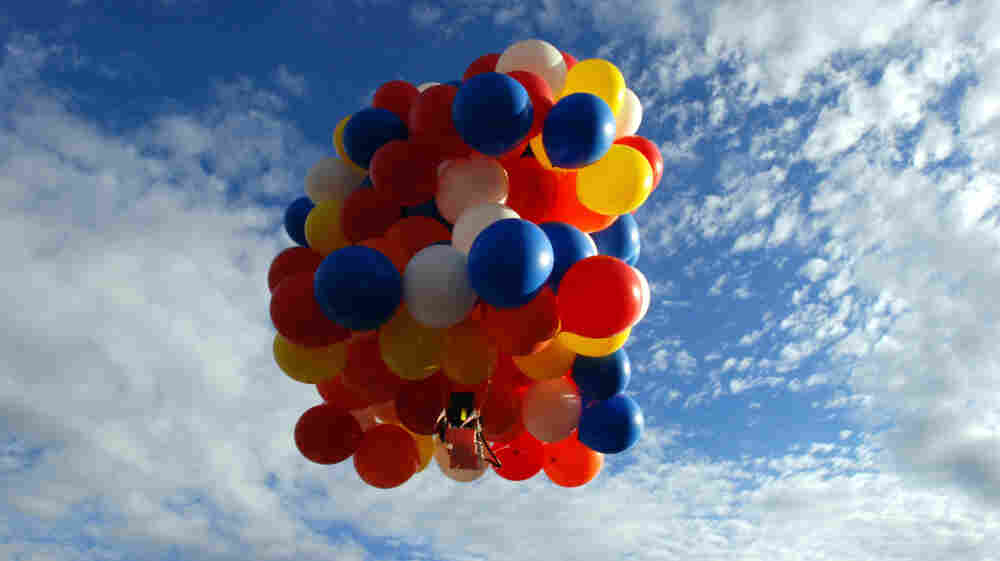 This July 5, 2008 file photo shows Kent Couch flying away from his gas station in Bend, Ore., riding a lawn chair rigged with more than 150 giant party balloons for a flight that ended in an Idaho farm field. Jeff Barnard/AP hide caption 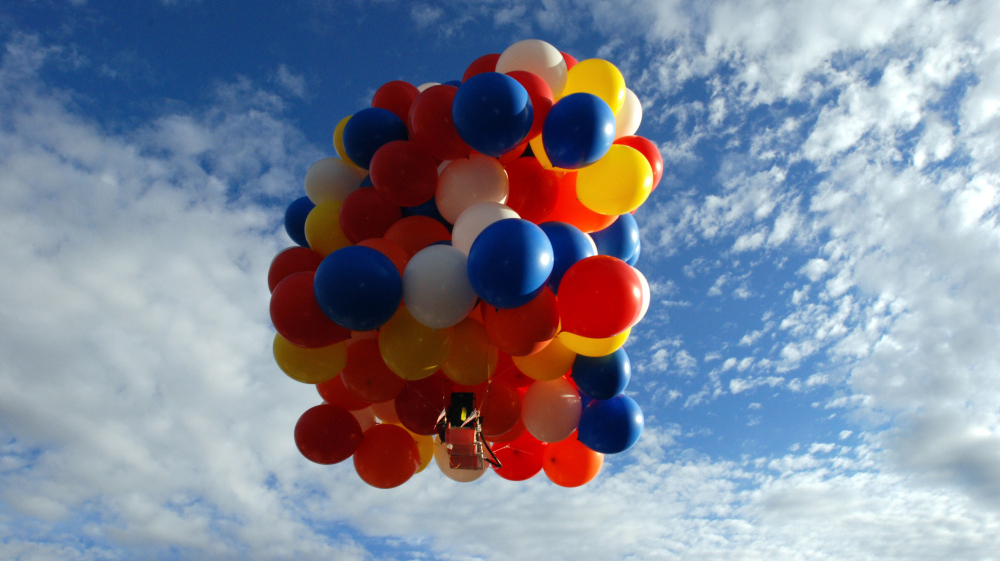 This July 5, 2008 file photo shows Kent Couch flying away from his gas station in Bend, Ore., riding a lawn chair rigged with more than 150 giant party balloons for a flight that ended in an Idaho farm field.

Kent Couch made news back in 2008, when he tied a lawn chair to a cluster of helium balloons and flew it 235 miles from Oregon to Idaho. Yesterday, Couch boarded a plane and announced he was headed to Baghdad to attempt a similar trip with Iraqi extreme sports enthusiast Fareed Lafta.

Couch's story has been making the rounds in Oregon since Wednesday. But it's now beginning to make its way across the country. Here's how he describes his plans for Iraq on his website:

Launching from the center of Baghdad's green zone, the daring duo will strive to reach a 25,000 foot elevation, travel over 600 miles and spend more than 24 hours in the air non-stop.

The aim of the project is to highlight the post-war cultural need to enrich the world of Iraqi children and youth by encouraging them to DREAM BIG for the future!

Couch spoke to KTVZ, "central Oregon's news leader," on Wednesday. He said this is going to be more daring than his previous flights. It'll involve twice as many balloons and at that altitude both he and Lafta will have to wear oxygen masks.

Now, with these contraptions, the wind decides where you go, so there's always the issue of crossing the border into Iran. KTVZ reports:

Soaring right over a war-stricken area, Couch is trying to work with the Iraqi and U.S. military to make sure they're secure.

But is he ready to gamble his life on a gust of wind?

"The fear is if we drift to Iran, which is only about 85 miles from Baghdad — and if we were to get a wind blowing west, we would just have to go up and come back down, because I'm not going to gamble being in Iran for very long," Couch said.

Couch also aknowledged that some people will think he's crazy and before Lafta contacted him with the idea, the gas-station owner thought he was done with cluster ballooning. But, he told the AP, he believes this flight can send a positive message.

"Now that Saddam Hussein is gone, and the U.S. is pulling out, it is time Iraq really steps up and begins to dream about putting the country back together," Couch told the AP. "I think between having a U.S. citizen and an Iraqi citizen launch together, where we are saying we are fulfilling our dream, it will encourage them to dream, knowing the sky is the limit if they just reach out and try."

The flight is scheduled for Nov. 15.