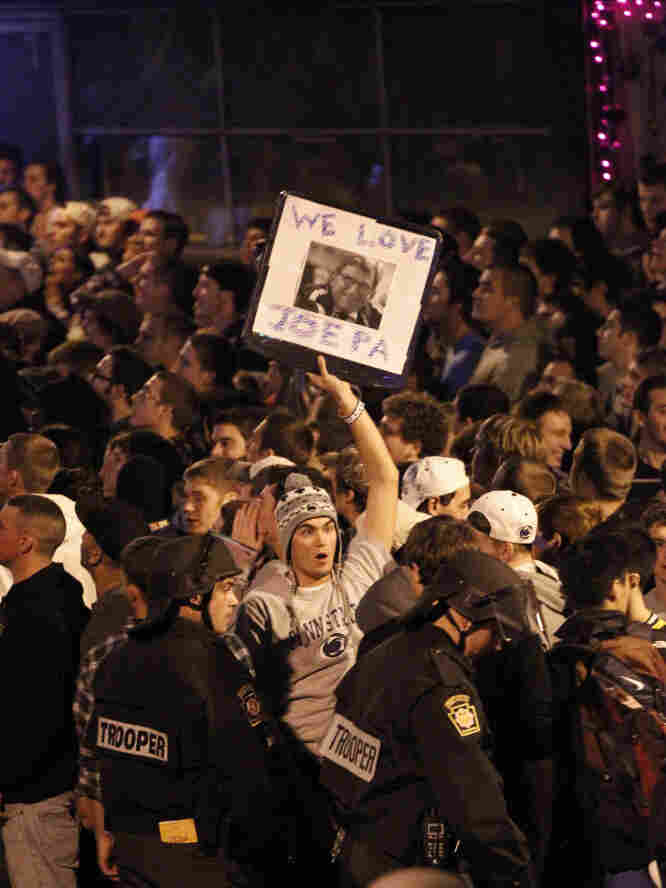 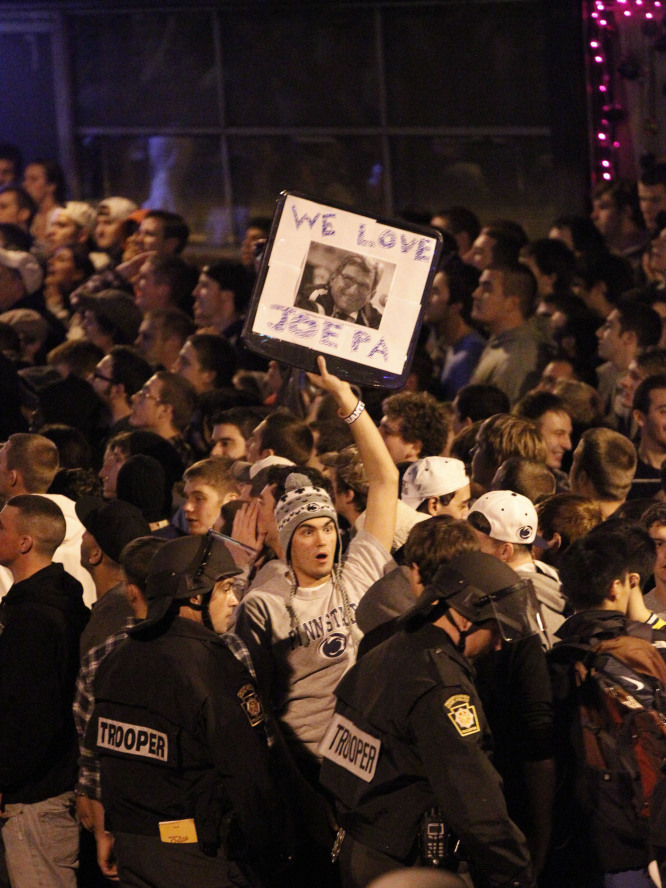 Scores of students gathered late Wednesday near the Penn State campus in State College, Pa., to protest the firing of football coach Joe Paterno. Dozens of police officers wearing helmets and carrying pepper spray were called in to control the crowd.

For Penn State's Joe Paterno, the winningest football coach in Division I history, his career ends with this statement Wednesday night from the school's board of trustees:

"The board determined that it is in the best interest of the University for Joe Paterno to no longer serve as head football coach, effective immediately."

Caught up in a scandal revolving around allegations that former assistant coach Jerry Sandusky had been abusing young boys for more than a decade and that Paterno and other school officials didn't do enough to either investigate or alert authorities to what was happening, the legendary coach won't be finishing out the season with his team — as he had hoped to do. (Sandusky says he's innocent.)

Paterno was told of the board's decision over the phone. Also fired: School President Graham Spanier.

After the announcement, as NPR's Jeff Brady reported from State College, Pa., students from the school filled the streets to express their outrage that Paterno wouldn't be allowed to coach Saturday at what would have been his last home game. Some turned over a television news van. Police in riot gear had to break up the crowd.

Some students went to Paterno's home, where he told them "I love you guys," according to The Patriot-News.

On Morning Edition, NPR's Tom Goldman talked about Paterno's legacy at Penn State. "The football program over the years became the embodiment of the school's slogan 'success with honor,' " Tom said. "Penn State won and the players graduated."

But ultimately, a grand jury's report (warning: it is graphic) that said Paterno had been told that Sandusky was seen sexually abusing a young boy and then alerted only the school's athletic director and not police, forced the trustees' to act. That, as Tom says, "is a real black mark" on Paterno's legacy.

"You can't wipe out all the good he did" in helping build Penn State into the major school it is now, said Tom. But the scandal is now likely "to be in the first line of his obituary."

The Patriot-News has a short video clip of the scene at Paterno's home last night when he came out to thank the students.

(That's not a scientific survey. It's a question meant to spark discussion.)